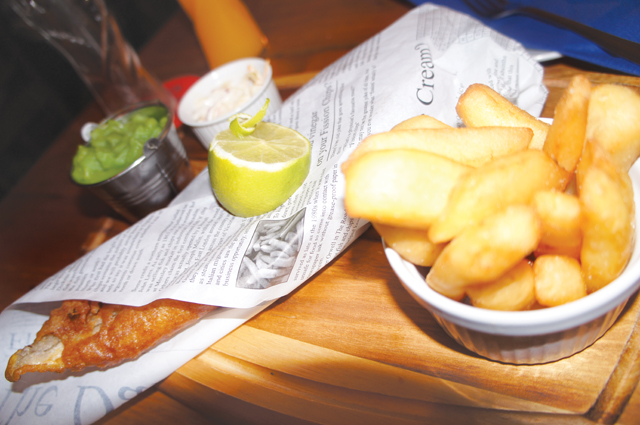 Having a good local pub is a blessing for any village and an important hub for the local community.
To visit another pub which has been reopened and revived by an enthusiastic new landlord and his wife confirms to me that those with the right formula can flourish. This month’s visit was to The Blue Bell Inn at Gringley on the Hill, about five miles outside Gainsborough.

The pub nestles in the High Street and is a charming, tenanted house which originally dates from the eighteenth century. The recent refurbishment has created a comfortable and welcoming interior which has a contemporary edge but still fits with the period features.

We were met by landlord, Adam Kay, in the main bar. A real fire was burning in the Victorian fireplace which was very welcome on this chilly and wet evening. We went through to one of the three dining areas to have a look through the menus. Adam has made a real feature of jazz at The Blue Bell. Foot tapping tracks were playing in the background and posters on the wall promoted the live bands which play once a month on Sunday afternoons. On Sundays, in between the Jazz and Tapas events, the pub opens from 10.30am offering a lunch/brunch style menu with a variety of light bites, breakfast options, main courses and specials, plus a roast option. The entertainment is refreshingly different and Adam’s search for some inspired additions to the menu have been partially driven by the skills of his Spanish head chef.

We began our meal with a selection of three dishes of tapas. Spicy garlic prawns, Gambas Pil Pil, with toasted slices of baguette; Patatas Bravas, tomatoes with crispy roast potatoes and Calamares Andalucia with garlic and mayonnaise. The Sunday sessions of live Jazz and Tapas have proved a popular alternative with locals to the traditional Sunday lunch options.

For main course my companion chose fish and chips served with mushy peas. It arrived piping hot with the fish wrapped in a ‘newspaper’ wrapper. The fish was succulent within the crispy batter. I explored the Black Rock Grill steak menu which has an intriguing choice of exotic steaks from South Africa, Australia and America. Ever tried kangaroo or crocodile? Well now was my chance. I like eating game so I decided to try the Africa triple platter which features springbok, blesbok and wildebeest fillet steaks.

My food arrived on a purposely designed platter which had salad and coleslaw on the right, chips on the left and in the middle a square indent to accommodate the heated, volcanic Black Rock and its metal cradle. The three steaks were already beginning to cook and sizzle. I took the offer of a side plate so that I could cook each piece of meat as I wanted it. Adam told me that the Hot Rock steaks are very popular with the members of local shoots who come to the pub. It was certainly a meat feast. My favourite of the three was the fillet of springbok which was soft and wonderfully sweet to eat. While these steaks may have a novelty factor, they were very tasty and as good, if not better, than steaks I have been served in the past.

If you do not feel adventurous enough to try these steaks from around the world there is plenty of choice for more conservative tastes, and a children’s menu.

We were getting very full now so we decided to share one of the homemade desserts. We opted for the raspberry cheesecake with ice cream. This was a perfect way to finish our meal – light, creamy and deliciously fruity.

If you would like to enjoy a relaxed Sunday afternoon of music and Spanish tapas, the Jessica Rabbit Duo are playing on Sunday, 7th April, with renowned jazz guitarist, Pat McCarthy, playing on Sunday, 12th May. As an alternative, and to celebrate all things English, a St George’s Day Acoustic Afternoon with ‘English’ Tapas, is taking place on Sunday, 21st April. Bookings for all the events are now being taken.