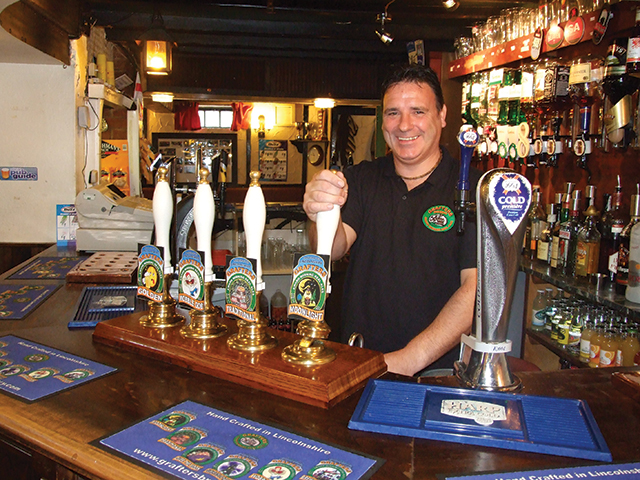 Hail to the ale!

Carlie Shucksmith visited Grafters Brewery at the Half Moon Inn to talk to master-brewer Phil Troop and sample some of his winning beers.
Since starting his own brewing business three years ago Phil Troop of Grafters Brewery in Willingham by Stow has already won six top awards for his Real Ales. Phil has been landlord of the Half Moon Inn (winner of the Gainsborough CAMRA ‘Pub of the Year’ in 2004, 2008 & 2009) for fourteen years and has always had a healthy appetite for Real Ale.

It all started in 2007 when Phil expressed an interest to see the Fulstow Brewery in Louth so was invited to help for a few days. On returning to the Half Moon he bought a starter kit and enrolled on a course at Brewlab in Sunderland in August 2007 to learn the brewing process. After converting the pub garage into a micro-brewery Phil brewed his first ale in October and the following week it went on sale. Phil explains: “I looked at the styles of Black Sheep and Bombardier, which sold well, and went along similar lines to make my first brew”. The locals were keen to try Phil’s Traditional beer but he says: “I was very nervous when I served my first home-brewed pint! I was watching for facial expressions that would give away what people thought!” However, he had nothing to worry about since two barrels of Traditional were sold on the first night!

Since visitors to the pub have developed a keen taste for Phil’s ales he strives for consistency in the taste of his product. Annual water tests determine the pH of the mains water so the recipe can be altered accordingly to maintain the correct flavour. The brewery uses only wholegrain crops with the recipe being adjusted if the crop varies.

Phil’s reputation grew quickly by word of mouth, with the Gainsborough CAMRA society being particularly supportive. In 2008 he was invited to the Peterborough Beer Festival, the biggest outdoor festival in the country. Three of Phil’s ales – Moonlight, Brewsters Troop and Darker Side of the Moon – were entered into the New Brewers category, which contained 100 different beers in total. Phil explains: “I was playing darts when I received a phone call to say ‘Congratulations, you have won an award’. I was really shocked since I had only been brewing for a year.” He was informed that Moonlight, a light bitter with a citrus flavour, had won gold in the ‘Best beer from a new brewery’ category. Brewers Troop, a darker malt bitter, was awarded silver and Darker Side of the Moon, more like Guinness in colour, gained 6th place out of 100 beers.

This was just the start of a collection of awards to be won by Grafters Brewery. After being invited back to the Peterborough Beer Festival 2009, which attracts 30 000 visitors, Phil’s ales joined 450 beers and 150 brewers in the main competition. Once again Moonlight took the top prize, winning gold in the Best Bitter under 4% category. Above all Phil is most proud of Moonlight winning the Overall Champion Beer of the competition. “I couldn’t believe it,” he says. “I thought it was a wind-up at first, especially with the Beer taking second place had been voted BEST BEER IN BRITAIN in August.”. And the awards just kept on coming with Moonlight winning gold in the Best Bitter under 4% category for the second year running in 2010.

Phil believes the benefit of this particular competition is the fact that the awards are decided by blind tasting. Each visitor is given a voting slip to nominate their top three choices, which is then posted into a ballot box. The voting slips are then divided into categories and the top six beers from each category are put forward to a blind tasting panel. The panel award marks for a variety of qualities including clarity, smell and taste. From the final panel of awards given to the top beers of each category the judges then decide on the best beer of the festival.

So what is next for Phil? He explains: “I recently brewed some special beer for the Lincoln Beer Festival which was chosen for the Peterborough and Nottingham Beer Festivals.” The Roman theme of the festival in Lincoln along with the ‘ticker’ nickname for beer enthusiasts inspired the name of Biggus Tickus for the speciality festival brew. Peterborough CAMRA then approached Phil to produce a Bigger Biggus Tickus for their festival, with an increased ABV of 5.2%. Phil explains: “When the Nottingham Beer Festival heard about it they asked me to make the Biggest Tickus of All especially for them with an ABV of 6%!”

Over the last three years Phil has enjoyed the rewards of brewing so much that he has ambitions to quadruple the size of the brewery. The brewery currently stands as a two and a half barrel brewing plant producing ten barrels of beer per week. Although Phil wishes to expand his production he still wants to maintain the quality and integrity of his beer. “I think if the brewery gets too big you will lose the personality of the product. I love the Half Moon and I want to make it known as a real ale pub” he says. Phil’s goal is to reduce the amount of commercial beers in the Half Moon and install more pumps serving Real Ales. He would like to establish a sharing system with other breweries so that his customers can enjoy a selection of beers from different locations.

Due to popular local demand Phil hopes to begin bottling his beers to supply local farm shops. He currently produces a Christmas gift pack, containing five bottles of beer and a glass, which can be purchased from the Half Moon. Phil offers group tours by arrangement for a minimum of six people. For £20 each the group receive a fish and chip supper, a tour of the brewery and a chance to sample the award winning ales. Phil is truly passionate about his work and loves that his customers enjoy drinking his ales, so is looking forward to continuing with his award winning favourites as well as developing new tastes. “It is nice to be recognised for the effort and passion that goes into the product. I just want to keep making good beers!”

For more information about Grafters Brewery and the Half Moon Inn log on to www.graftersbrewery.com, where you can also find a list of establishments in Lincolnshire where you can enjoy Grafters Ales.