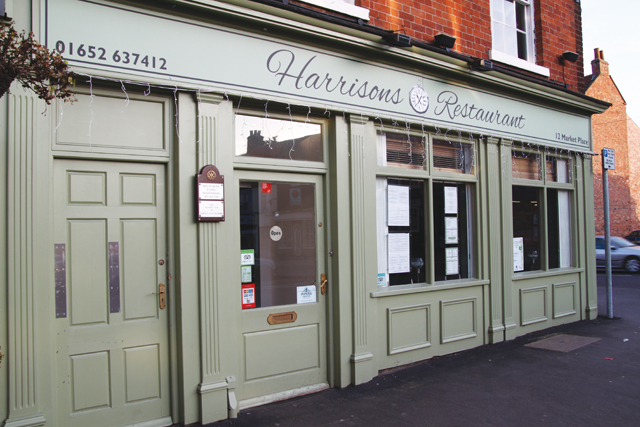 This month we travelled to the north of the county to visit Harrisons in Barton-upon-Humber, who were the winners of the 2014/15 Select Lincolnshire Restaurant of the Year award.
Owner and head chef, Peter Storey, opened the restaurant in 2014 and chose the name in reference to two famous residents: John and Ken Harrison. John Harrison invented the marine chronological clock and Ken Harrison is a local artist who drew Desperate Dan, amongst others, for over forty years in the Dandy comics. Peter has a long career in catering, starting his career at Forest Pines, before moving to The Stables.

We arrived early in the evening, which gave us time to have a look around the restaurant. Peter has gone for a shabby-chic-meets-Moulin-Rouge theme, with hues of green on the wall offset by red tablecloths.

When we arrived we were offered a choice of table and given a copy of the food and drinks menu. The restaurant offers an à la carte menu as well as a monthly special menu offering two or three courses at a set price.

The March menu offered a choice of starters, including oxtail soup, Lincolnshire rarebit or a flat-iron steak kebab. The mains included a Lincolnshire lamb hot pot, chicken Rossini, cod loin and clam chowder and a vegetarian tarte tatin. Dessert options, if you could squeeze one in, were tarte au citron, or an apple and rhubarb pie.

My companion Angelo and I opted for the à la carte menu on this occasion. After browsing the menu I chose the Stargazer Scampi, a fish not too dissimilar from monkfish, which was accompanied by a chilli tartare sauce. The presentation was lovely, with the fish served in a mini frying basket. Angelo chose to have the blue cheese flat mushroom, which was baked with a Cote Hill blue cheese and pancetta stuffing and served with a prosciutto crisp. Other choices included a Lincolnshire style French onion soup, chocolate pigeon breast, Lincolnshire goat’s cheese or Alf Enderby’s smoked platter.

Ready for our mains, I was looking forward to my choice of mulled wine duck, which was served with a confit duck leg, in a cabbage leaf with a red wine reduction, red cabbage, carrot puree and bubble and squeak. After spending plenty of time deciding, Angelo chose the Lincolnshire hogget – which we found out was a sheep between the ages of one and two. It was served perfectly pink, with carrot puree, red cabbage and bubble and squeak.

Although after our mains we were feeling quite full, we chose to have a look at the dessert menu to see what might tempt us. I opted for the lime marmalade cheesecake, which was on a honey and oat biscuit and served with a champagne sorbet. The cheesecake was divine; the flavours of lime in the cream cheese were perfect. I was slightly surprised by the addition of the champagne sorbet. Whilst it was a beautiful sorbet, the flavours were very different and I didn’t feel it added to the dessert; however, as the cheesecake was so good, it didn’t detract.

Angelo chose the banana and chocolate bread and butter pudding which was baked in a crème Anglaise and served with a creamy custard. He commented that the dessert was filling and warming, just what was needed on a chilly March evening. Other desserts included a chocolate fondant, homemade spotted dick and custard, a Cherry Bakewell crème brûlée, as well as a selection of cheeses, which are all from Lincolnshire.