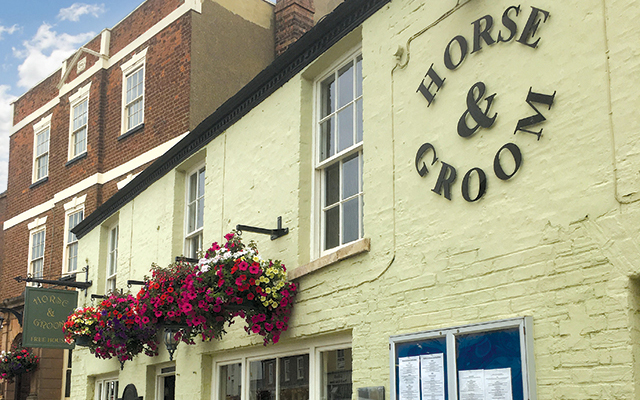 This month we were invited to the Horse and Groom in Holbeach in the heart of the Lincolnshire Fens.

I always enjoy a drive down the A17 to the southerly part of our county. With views for miles over the fields on a lovely summer evening, with the sun going down, the journey made for some lovely images. Although in Lincolnshire, Holbeach is very close to other cities including Peterborough and King’s Lynn and attracts a wide range of visitors.

When we arrived we were welcomed by Nick and his team. Nick and his family moved to Holbeach thirteen years ago from Bishop’s Stortford. Both he and his wife have a food, drink and hospitality background, and they were looking for a pub they could put their stamp on. They came across the Horse and Groom, which needed some TLC, and relocated to give the building a new lease of life.

In the time they have been there, the pub has been through a full renovation, including the addition of a new kitchen and three en-suite letting rooms in a barn to the back of the premises.

Although Nick is currently working full-time in the kitchen he has handed over the reins to his new head – chef who has introduced a new menu to the pub, using modern European classics to entice customers. Nick and his team are passionate about local produce and they use county based businesses including M&J Seafoods and Hargraves Butchers of Pinchbeck for all their meat. With the vast amount of vegetables grown on their doorstep they don’t have to go far for quality produce.

We took our seat in the restaurant area facing the recently refurbished enclosed courtyard. Although it was a lovely evening we chose to sit inside to sample the atmosphere. The menu at the Horse & Groom offered a great choice, and aside from their main menu they also offer daily specials.

We both opted for fish starters with my guest choosing the prawn cocktail whilst I chose the salt and pepper squid. The prawn cocktail was extremely fresh, and served with the sauce on the side, which allows the customer to choose how much they would like. Served in a martini glass with wholemeal bread it was the perfect size to start any meal. My salt and pepper squid came served in a oyster shaped bowl, served with homemade tartare sauce and salad. The tartere sauce was absolutely beautiful and a perfect accompaniment to the squid.

For our mains my guest chose to stick with the fish theme and ordered one of the specials, a king prawn linguine. The portion size was filling and it was served with a large bowl of salad and garlic bread. The prawns tasted fresh, and although a little bit messy, they soon disappeared.

As I was undecided as to what I wanted I opted for the 8oz sirloin steak which was served with twice cooked chips, grilled tomato, mushroom, onion rings and peas. I like my steaks to be almost mooing and was extremely pleased to see how well it had been cooked. The steak knife just slid through the meat.

Although we were sufficiently full, and had a drive back to Lincoln, it would be a shame to not sample the desserts. I chose the chocolate brownie served with ice-cream which was served warm and oozing in chocolate. My guest chose something a bit lighter and had three scoops of ice-cream including vanilla, chocolate and hazelnut. The hazelnut was a winner, and it’s already on my shopping list to keep at home.