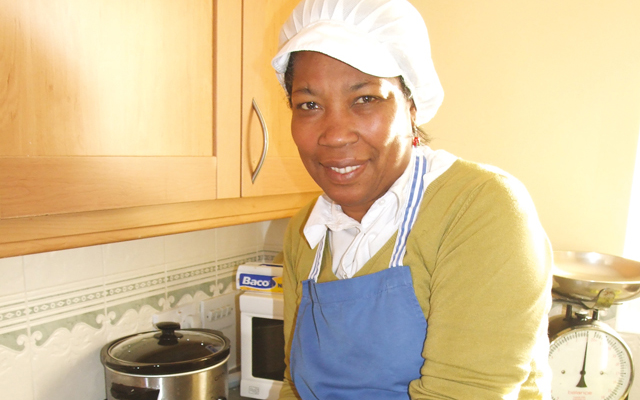 When Jenny Smith and her daughter, Elinor, picked too many strawberries one afternoon in 2005 they never dreamt that it would lead to a business which would take over their lives and home.
With the glut, Jenny, a trained, full-time chef, decided to make some jam and give it away to friends. It went down so well that they came back for more and started to ask Jenny to make varieties to order; and now five years later Jenny’s Jams has nineteen products in the range of jams, marmalades, chutneys and specials including mincemeat, cranberry, orange and brandy sauce and pickled onions and beetroot.

I went along to meet Jenny in her Lincoln kitchen and was overwhelmed by the warm welcome and choice of just-baked sultana or cheese scones she had prepared so that I could taste test both the sweet and savoury options. This was another hard day at the office but I rose to the challenge! I had tasted Jenny’s raspberry jam before on the recommendation of a local celebration cake maker who had just switched to using Jenny’s Jams in her cakes. I was keen to find out from Jenny how she managed to achieve the depth of flavour, the beautiful colour and consistency that are the hallmarks of all her products.

I asked Jenny where she sourced her ingredients? “Where possible,” she explained “all my ingredients are sourced in Lincolnshire. You can’t do that in the case of spices, oranges and lemons but strawberries and raspberries come from Willow Farm at Chapel St Leonards and the variety of the fruit, picked in prime condition gives you the flavour.” Jenny only uses British sugars and I tried the blackcurrent jam which positively burst with flavour. I wondered if there is a secret recipe she is using? No, her recipes come from her husband Roger’s mother’s 1950s cookery books and are classic, self set, traditional recipes with no artificial preservatives. Jenny was downplaying her own skill which is the final missing ingredient. She makes relatively small batches, prepares and chops all the ingredients by hand and relies only on her own taste buds and eye to tell when the mix has heated sufficiently to set when cool.

As Jenny spoke, Roger and I carried on with our jam tasting; apricot with a hint of lemon, delicious strawberry and plum. The fruit flavour always shines through rather than being overwhelmed with sweetness. I finished the ‘sweet’ section by trying some sublime, lime marmalade.

Since the autumn, Jenny has given up her job to concentrate on Jenny’s Jams, a decision which she has found slightly scary at times, especially when the Lincoln Christmas Market was cancelled. Other opportunities have come along though and the markets at the Healthy Hub, Lincoln have been very successful and these are now being held on a monthly basis at the Park Street venue.

As we moved on to try a very smooth plum and date chutney, Jenny told me about her three star ‘Great Taste’ Award which she won in 2009. This led to her being featured on the BBC’s Working Lunch programme and she represents Select Lincolnshire as a Food Ambassador, a role she obviously enjoys as it allows her to combine her twenty-six years of experience as a chef with her belief in the quality and integrity of food.

One of Jenny’s best selling new products is a chilli jam which has inspired her to now explore producing a chilli sauce. I tried the chilli jam and the red pepper relish which really packs a punch. I really liked the fact that it is obvious these products are hand crafted with the chunky cut making it very easy to identity exactly what you are eating. I asked Jenny which was her favourite? “Definitely the strawberry jam,” she said “the taste has so many happy memories for me and takes me back to my childhood when I would eat fresh bread and my aunt’s strawberry jam.” Family and friends are often roped in for tasting new products and especially piccalilli which is not to Jenny’s personal taste but sells well especially at Christmas.

Now supplying over forty outlets including the Lincolnshire Co-operative and a national supermarket interested in her products, Jenny would like to take her business to the next level. She plans to attend more shows in 2011 where customers can taste Jenny’s Jams and perhaps look for a small premises from which to operate. I look forward to seeing where Jenny will take the business in the next five years and hoping that I would be invited back for another tasting.