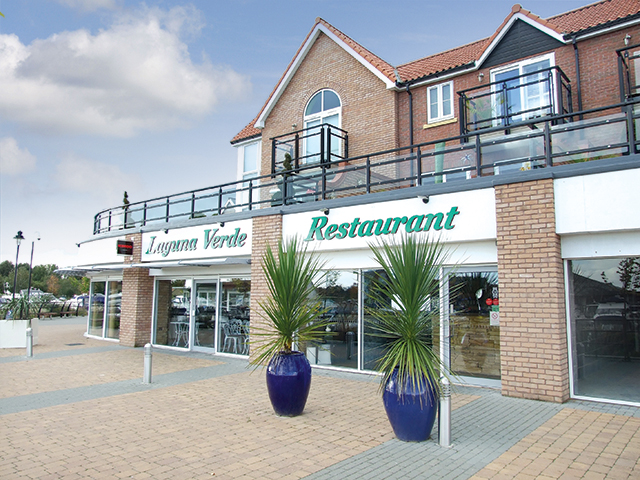 This month I was invited to Laguna Verde at Burton Waters, Lincoln. I’ve had many a pleasant evening at Burton Waters before, so I was especially looking forward to returning.
For those who have not visited this part of Lincoln before, Burton Waters is about two miles from the city centre, lying just to the west along the A57. It is a purpose-built development set in a marina and complementing the residential development is a mixture of businesses including restaurants, health facilities and other amenities.

Laguna Verde has been open for almost eighteen months and is owned by husband and wife team, Laszlo and Laura. When we first arrived we were warmly greeted by Laszlo and shown to our table. Many a time I have gone on a dining out review and my companion and I have been left to our own devices, but Laszlo was keen to talk us, giving us some details of his past on a cruise ship in New York, before he and his wife bought the restaurant. Whilst he introduced himself and the restaurant, we were both served a glass of Kir Royale to start the evening. It was nice to talk about how the passion for the restaurant developed and hear about Laszlo’s experiences.

We were shown the menu, but were happy to accept suggestions and were told that one of the best starters was the chef’s special of scallops with king prawns, so we opted for this alongside something more traditional, the beef carpaccio. Whilst we were waiting for our starters, we were served a bowl of olives and some fresh bread with dips. We also put in our wine order and instead of choosing from the menu let Laura and Laszlo make suggestions for us based on our tastes. The passion from them both for the food and drink shows through, and it was nice to see they do this with every table.

Our starters were served and they both looked beautiful. One of my favourite seafoods is prawns and it is hard not to admit how good this starter was. There are times when words can’t do the food justice, but this was just stunning. The prawns are probably the best I have ever eaten; the flavours, the way they were cooked, the accompaniments they were served with, it was all amazing, and the scallops were just as tasty. My guest opted for the carpaccio, although he did have to share with me, and it is easy to see why they recommend this. It just melted in the mouth and was extremely well seasoned and served with rocket, parmesan and black olives.

Our main courses were also recommended and Laszlo had organised for us to have one the options from the forthcoming Christmas menu, and suggested we also try the filet mignon. As I’d not had boar before I decided this would be for me and it was such a great choice. I’m not a fan of gamey meats, and was pleasantly surprised that this was not at all overpowering and melted in the mouth. It was served with beetroot and poached pear and will make a lovely option for those dining over the festive period. My guest had the filet mignon, which was served with Vitelotte potatoes and seasonal vegetables with a truffle sauce. Unfortunately, due to seasonal influences, the potatoes weren’t quite as violet as they should be, but it didn’t detract from how good the meal was. Again the beef just melted in the mouth and the accompaniments worked so well.

Whilst we let our meals settle slightly, we had more chance to speak to Laura and Laszlo. Both originally from Hungary, they made their home in Lincolnshire with a plan to create a restaurant that offers the best of Mediterranean cuisine. They have spent a long time ensuring they get everything right, including selecting each of the sixty-plus wines they sell. Both are confident sommeliers and my guest and I were happy to take their recommendations from both our preferences and to complement the menu choices. Even the little things have been thought through in great detail, including their bottled water which has been chosen for its pureness, and has a bottle designed by Calvin Klein.

Our dessert choices were also recommended and I went for what can only be described as a food lover’s heaven of dark chocolate Baileys mousse served with a homemade chocolate ice-cream, with a fruit coulis and meringue shards. This dessert was absolute heaven; the chocolate was beautiful and the meringue shards helped with a new texture. It really was extremely well made and very well presented. My guest opted for the New York cheesecake, a classic dessert, so he wanted to see how Laszlo and his team put their own twist on it. It was extremely light but full of vanilla flavour, and we chose to try the fruits of the forest homemade ice cream to accompany it. It was more of a sorbet, but that worked really well as it was sweet, which you would expect from a berry sorbet.

We always finish our meals with a coffee and again it was great to hear from Laszlo about the time that has gone into making sure he has the right coffee for his restaurant. After trying all the classic names that we all know, he tried a coffee from Naples, Italy called Kimbo which he felt was the best flavour, and he wasn’t wrong. They have a lot of repeat custom and always listen to what their guests want, to ensure they come back. We can’t wait to visit again.