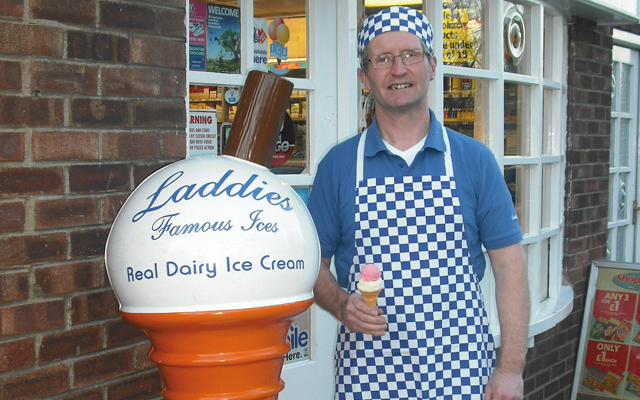 Forget your Walls, Ben & Jerry’s and Häagen Dazs – when it comes to ice cream, as any true Lincolnshire Yellowbelly worth their salt will tell you, only a Laddies Ice will do.
The award-winning brand, produced in Holbeach since 1922, is made by third-generation ice cream maker Richard Ladbroke, who runs the business in Church Street.

He is thrilled at the continuing popularity of his family’s homemade dairy treat, which has seen customers returning for generations.

“It’s fantastic we’ve been going for more than ninety years. Things can always be made better, but we try to keep the quality of our product as good as we can make it, and that’s why it’s outlasted others and kept people coming back,” he says.

Laddies Ices came into being by chance thanks to Richard’s grandfather William, who tossed a coin to decide his fate; he was either going to start making ice cream or become a butcher, and the former won.

Richard says his grandfather made his first batch of ices to sell at the Gedney Hill sports and village show and later that year bought a little shop in Back Lane, which he later swapped for a property in Wignalls Gate, more suited to commercial production.

“Advances in mechanical refrigeration during the 1910s and 1920s made things easier,” explains Richard, “as ice cream had previously been a treat reserved for the upper classes and could only be made in winter.”

But after World War One small-scale refrigeration appliances started to appear and the ice cream season could be extended beyond April to October, and William seized the opportunity to fill the gap in the market.

“The family’s first ice creams were plain,” his grandson recalls, “made of a combination of eggs, butter, sugar and cornflour boiled up together on the side of the fire.”

Richard said there was a lot of trial and error and experimentation in the early days, with the end product selling for ha’penny, a penny and tuppence a time.

With the countryside opening up, thanks to the arrival of the motor car, William started taking his ice cream out to the wider public. In 1929 he bought an old First World War ex-army ambulance for £5 and got a local carpenter to rebuild the Model T Ford, making a roof from a sail cloth covered in linseed oil to waterproof it.

And thanks to this he was able to take his treats to village shows.

By the 1970s the family had four ice cream vans travelling out to Crowland, Pinchbeck, Sutton Bridge, the Norfolk border, Swineshead and North Kyme.

Richard’s father Derek left school when he was fourteen and started helping out with the family business too – taking the ice cream cart around his home town.

“He’d go around the local area on Sunday mornings and then go and stand outside Carter’s Park for the afternoon onwards,” Richard recalls.

He was seven when his father bought his first ice cream making machine, which would save many hours’ labour as the task had previously been done by hand.

Mr Ladbroke senior was called up following the outbreak of the Second World War and served with the paratrooper regiment – touring North Africa, Italy, southern France, Greece and Palestine. On returning home in 1946 he married Nellie and settled in Holbeach, returning to the family business, which he would eventually take over.

Laddies moved to new premises in Church Street in 1946, when, after the end of the war and rationing, William was keen to expand further. The shop was originally sited in what is now the factory and the ice creams were sold to customers through a window. Further technological advances meant the family could also sell family packs for home freezers. The shop also stocks a wide range of sweets and chocolates.

The ice cream vans eventually went by the wayside – as more people opted for shop-bought ice cream and lollies. People were also more affluent, able to go out more and when the vans made their rounds they would often find lots of empty homes. The Ladbrokes also found that people preferred to come to the shop to buy their ice creams and so opened up a dedicated patio during the busy summer months. They still retain a cart, which they take to outside events and other business also comes in the form of supplying caterers.

Four flavours were initially served – strawberry, chocolate, mint and vanilla – but when Richard, a trained engineer, took over the shop in 1988, he began experimenting with new creations. The menu now boasts around fifty flavours, the most unusual being smoked salmon – requested by a caterer for a function where it was used as a starter.

Other unusual combinations trialled over the years include lavender, violet, gingerbread and bubblegum. A special Champagne ice cream was made to mark the occasion when a local couple won just over £100,000 on the National Lottery with a ticket bought at the store in 2009.

Despite requests for the more unusual, Richard says vanilla remains the most popular by far, accounting for sixty per cent of sales, followed by strawberry, chocolate, rum and raisin, and mint. His personal favourite is the more exotic tutti frutti.

“The name Laddies was coined when advertising merchandise was being made – and the family moniker was considered too long and not catchy enough,” Richard explains.

The process of making the ice cream has changed little since William first started making it, although the machinery involved has evolved, making the process easier.

When asked why the brand has lasted so long Richard replies: “We like to think we give good quality – as my grandfather used to say, ‘You can’t get good stuff out, if you don’t put good stuff in’ and that’s still true today.”

As the famous saying goes: ‘Licked but never beaten’, and I’ll second that.

Try them for yourself by visiting Laddies, 32 Church Street, Holbeach or for more information