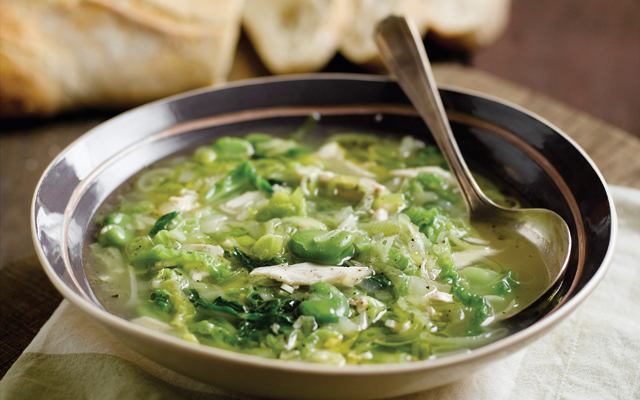 Eating healthy, vitamin-rich, seasonal produce becomes a challenge during the autumn and winter months, when the British climate means that few native vegetables are available.
However, the leek is one vegetable that is at its best during the coldest months of the year and because it’s packed with nutrients and crucial anti-oxidants will help stave off winter colds and flu too.

In season from 1st November through to May, the British leek is a fantastically versatile vegetable that adds flavour and bite. Leeks are also a great choice for those following a healthy diet. They are very low in calories and packed full of vitamins and minerals such as Iron, Vitamin C and Folate.

More refined, subtle and sweeter than the average onion, the leek has long been treasured in Europe and the Eastern Mediterranean where it has been consumed for more than 3,000 years. Today 2,000 ha of leeks are farmed in Great Britain producing around 40-50,000 tons each season, with Lincolnshire being one of the main leek growing regions in the country.

The Casey family has farmed at Willow Farm, near Coningsby since 1970. Today the family works approximately 800 acres and include asparagus, sugar beet and cereals among their produce – however, their main focus is growing leeks.

Leeks have been grown on the farm since 1991. Starting with six acres, the enterprise has been built up over twenty years. Today it encompasses over 100 acres, with a purpose-built pack house, producing about 900 tonnes of leeks annually.

Four generations are involved in the farm. They include John Casey (88) and his wife Vera who founded the business; their son Mervyn and his wife Marilyn Casey and their grandchildren Tim and Nicola who are both married and have children of their own.

According to Marilyn there is nothing tastier to eat than fresh leeks – and she should know, as a qualified home economist Marilyn is often called upon to demonstrate her culinary skills at clubs and societies across the county and of course leeks come top of the menu. A particular favourite is her recipe for leek, potato and bacon soup – ideal for cold autumn and winter evenings.

Tim, who graduated from Harper Adams University in 2008, works as pack house production manager, while Nicola is technical manager and in charge of logistics. She is married to Adam, who oversees field production. In addition the farm employs up to thirty seasonal staff in the pack house where the harvested leeks are prepared for sale. A further twenty staff are employed on the field rig, so peak times can see a team of fifty involved in production.

Two harvesting systems are run side by side. The first sees leeks taken to the pack house after being harvested mechanically. The second system uses a mobile leek rig, including a wash, so the finished product comes off the field, packed and ready to go straight to the supermarket.

The Caseys’ commitment to producing a top quality product means that they continue to hand finish their leeks. This sees every leek stripped, trimmed and inspected by hand to ensure that only the very best produce reaches consumers. Different varieties are grown in succession and significant effort is put into ensuring the plants thrive: fields are hand-weeded, irrigated on a regular basis and early plants are covered with fleece to create a frost-free micro-climate.

The farm has always farmed responsibly, following good farming practice and using voluntary initiatives. It is a beacon farm for the Campaign for the Farmed Environment, held up as an example of excellence. Voluntary environmental management measures include eight acres of grassland in permanent pasture, cover strips for game birds, overwintered stubbles and the maintenance of three acres of low lying wetland.

In 2014 Tim Casey became one of several farmers around Lincolnshire to form a partnership with national food charity the Gleaning Network UK, alerting the food waste campaign when opportunities come up to save healthy, fresh food for those most in need.

The collaboration saw a team of volunteers visiting the Caseys’ farm to harvest and pack surplus leeks that would otherwise have gone to waste and have been ploughed back into the ground. Around 1,000 kilos of leeks were salvaged – enough for 12,500 portions – and then distributed to regional food and homeless charities.

Tim said: Until now we had no way of utilising our surplus produce. Fortunately this new initiative means we have an outlet for produce we would normally just plough back into the soil and it’s great to know that local charities and those in need can benefit from it.”

To mark the 2015 British leek season, the British Leek Growers Association has been working in partnership with leading food blogger and Lincolnshire Life columnist Dominic Franks, to develop a series of delicious, seasonal, leek-based recipes. To find out more visit www.britishleeks.co.uk

LEEK FACTS – DID YOU KNOW?
• St David, the Patron Saint of Wales, ordered his soldiers to wear leeks on their helmets in battle to differentiate themselves from the invading enemy, the Saxons.
• The leek is widely recognised as the national symbol of Wales.
• The French call the leek, ‘poireau’ which also means ‘simpleton’ in Europe.
• Agatha Christie named one of her most famous characters, the French detective Poirot, after the leek.
• The Greek philosopher Aristotle credited the clear voice of the partridge to a diet of leeks.
• It is widely reported the Roman Emperor Nero (37-68 AD) ate leeks in quantity, cooked in oil, to improve his singing voice. He became known as Porophagus or ‘leek eater’.
• Even the bible mentions leeks. The Israelites lamented the loss of one of their favourite foods as they searched for the Promised Land.
• In Elizabethan times, Shakespeare refers to the custom of wearing a leek as ‘an ancient tradition’. Henry V tells Fluellen he is wearing a leek “for I am Welsh, you know, good countryman.”
• In traditional medicine, the leek is highly regarded as a cure for the common cold, alleviating the pains of childbirth and a tasty, healthy ingredient in cawl, the traditional Welsh broth.
• In medieval times the leek was considered a means of foretelling the future and keeping away evil spirits. It was believed that a leek placed under a pillow at night allowed young maidens to see the features of their future husbands.