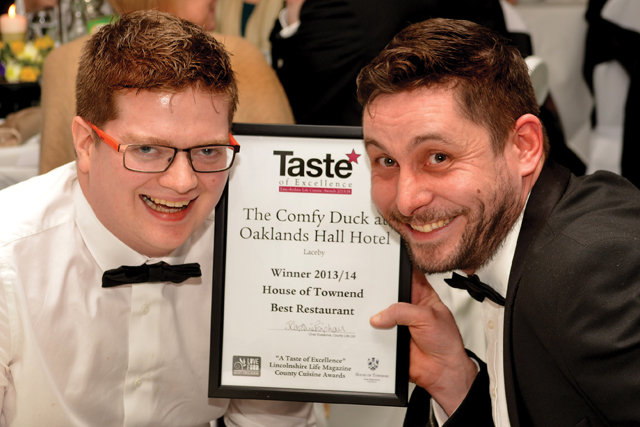 A Taste of Excellence 2013/14
Finalists, sponsors and guests joined Lincolnshire Life at The Petwood Hotel, Woodhall Spa for the announcement of the winners of this year’s County Cuisine Awards. Lincolnshire Life were delighted to be there in association with Love Food Select Lincolnshire as part of the Lincolnshire Food, Drink and Hospitality Awards 2014.

The event was compered by BBC Radio Lincolnshire presenter, Melvyn Prior and sponsored by The Petwood Hotel and Lincolnshire Co-operative in addition to the sponsors of the ‘Taste of Excellence’ judging categories: Young Chef of the Year and Lincoln College; Heart of Gold Best Tea or Coffee Shop; Tastes of Lincolnshire Best Pub Food and House of Townend Best Restaurant.

The awards were followed by many from the industry around the county on social media as the winners were announced.

Guests enjoyed a three-course meal featuring produce from some of the best known local names, including pork from Grasmere Farm, food from Abbey Parks and Cote Hill cheese. During the meal, RAF musician Sarah Jane performed a programme of songs from the 1940s.

The guest speaker was Phil Bonner from Aviation Heritage Lincolnshire, talking about the role food and farming has played for the forces.

The judges said of The Old Stables: “This charming and friendly cafe serves homemade dishes of high quality. A local favourite for a morning coffee, lunch or tea. Delicious homemade cakes and a real dedication to Lincolnshire produce shown in the variety and originality of the menu.”

Another closely contested category, with The Sebastopol Inn impressing the judges with quality of the food. It was the total package in terms of menus, service and decor. A family business where their involvement and care shows.

The judges noted of the winner: “A menu that was jam-packed full of interesting, insightful flavour combinations with a sensational dessert choice especially. Well detailed local sourcing and could have made many choices from this menu.”

The nominations for the next Lincolnshire Life County Cuisine Awards will open in May 2014. If you would like your establishment to be included on our database to receive nomination forms please contact: editorial@lincolnshirelife.co.uk or call 01522 527127.