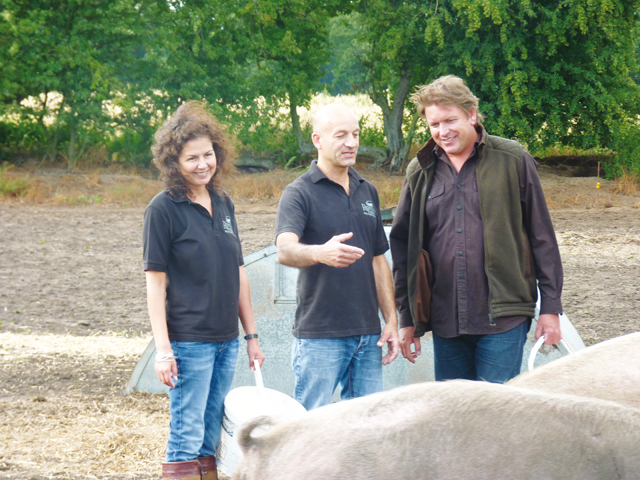 One Gainsborough couple has seen their hard work and ethical farming ethos result in awards, recognition from food critics and queues of loyal customers forming across Lincolnshire’s farmers’ markets for their free range pork.
“Everyone in the region is your competition, so faced with that you have to know that the quality of your pork really stands out. We do what we think is best and we work very hard to do it well.”

They have a firm commitment to quality, and it is has seen them through tough times from when they started out in the late 1990s to where they are now: recognised by the food industry and laden with Gold Awards from the Great Taste Awards. However, most importantly, they remain loved by customers who queue enthusiastically around their stalls at farmers’ markets across the Lincolnshire to buy their products.

It is clear to see that their free range products – fresh cuts of pork, pork pies, dry cured bacon, sausages and speciality products – don’t just stand out from the crowd, but are head and shoulders above their competitors not just in the county, but across the country.

Yet it has not been an overnight sensation. The couple have worked hard for fifteen years to keep things simple and consistent, to nurture their ethical business with their heart and soul, and ensure their animals are cared for throughout the production process and the final product is simply pork – with no ‘secret recipes’ or added production.

“Terry is a great farmer with the right temperament, and has put so much time and effort into pigs so we create a great product,” explains Jane. “We don’t advertise and say our pork is great, because that’s what everyone says about their products. We sell exactly what we produce, it’s genuine, and we have relied on word of mouth.”

It was back in 1991 that their adventure began, when they found the farm in Laughton Lane, Morton, where they still live and work today. Terry, who had started pig farming with his parents on their smallholding, was keen to take his ideas forward and the dry, sandy land was perfect for pigs.

“I was twenty-five and Terry was twenty-seven when we moved here; it was really a lovely time, we were really enthusiastic, we were working together to set-up and it was idyllic. We were young and we were doing exactly what we wanted to do. We enjoyed everything about it. It was a positive experience, but also hard work.”

The business evolved into what it is today during the national pig crisis during 1998. While many were looking ahead to the twenty-first century with hope and anticipation, Jane and Terry, and pig farmers all over the country, could not see a future for themselves beyond the end of the year, as cheap imports left even the strongest and best businesses in peril.

In the midst of this crisis for the nation’s farmers, and armed only with a determination to succeed and a burning belief in their own free range pig business, the couple managed to wrestle back control of their business’s destiny.

Jane calculated how she could sell the different cuts of pig and for how much, and then devised an idea for a pack that contained enough cuts for an average family to consume over the course of a month, costing £25. It was also inspired by her childhood growing up in rural Lincolnshire, where her mum would make sausages from meat brought home by her father, an agronomist, which was given to him by his clients.

With £1,000 of her own savings set aside to launch the new business, Jane began to call all of her friends to see if they would be interested. In little more than three months, the business was thriving. They had so many orders that she and Terry took lessons in how to butcher a pig from start to finish, in order to give the business more flexibility.

With the business progressing the right way, Jane received a leaflet through the door asking for people to attend a meeting to discuss establishing and running a farmers’ market in the county.

Jane was one of only two farmers to turn up, but the meeting led to East Lindsey District Council funding ADAS to run a trial of six one-off markets in differing locations. While this was a welcome step forward, Jane was left frustrated at the isolated nature of the markets, which had a lack of long-term thought.

“After the pilot scheme, that was it. Nothing. There were no plans and no money. That was it,” she explains. “I already knew from my own experience that in Lincolnshire we had all sorts of food produced in the county – you name it, the county had it: vegetables, meat, dairy, everything, but no one had access to it.

“My mission was that if you lived in Lincolnshire you deserved a farmers’ market in your local market town at least once a month. So myself and two other farmers looked at the county map and, between us, set up markets in towns.

“I spent more time on setting up farmers markets than I did on my own business,” admits Jane. “If somebody spends £1 at a farmers’ market or in the town, then 80p of that will stay in the locality. If £1 is spent in a supermarket, then only 20p benefits the local community the rest goes elsewhere. And that’s what convinced councils to give them a go.”

A total of seventeen other markets were set up across Lincolnshire over the years. While some of them have failed to stand the test of time, those that remain are still vital sales channels, not just for Jane and Terry’s exceptional business but other local food producers too.

“The farmers’ markets are still really important to us,” says Jane. “We have had the older generation saying our pork is beautiful tasting and they hadn’t had anything like it since granny used to keep a pig at the bottom of the garden, while people who have never considered buying from a farmer have seen us at a market and have tasted our products having never tried anything naturally made.

“People refer to us as ‘the stall with the queue’, which is great after all these years. We were faced with so much competition when we started. People came out of the woodwork because they thought people would buy anything, but you have to work hard, make an effort and do something different. You’ve got to get people to come out and buy something even if it’s raining or cold.

“We’ve had long queues of twenty people deep in winter, and you’re listening to them talking to each other and saying how lovely the pork chops were and how they had cooked them a certain way. You then get people who have stood waiting for just a pork pie asking us about trying something else.

“On our stall, and our website, people can get an idea of what we are producing, what they should buy, how they cook it – and you can be talking to Terry, the farmer behind the product, offering his knowledge. It’s very immediate and genuine.”

As well as customer reaction, Jane has looked to compare and assess her products against those produced by others nationally.

“I don’t usually enter awards locally for butchers or the pig industry, but what I did was join the Guild of Fine Food,” explains Jane. “We have been entering its Great Taste Awards for ten years, and in our first year I entered eleven products and won seven golds. Since then we’ve gone on to win a Gold Award for all of our products.

“We won the Midlands and East Anglia Best Speciality Food award last year and a Golden Fork Award for our free range loin of pork. This is how I benchmark the business and assess other companies, but over time you don’t hear from some of those again. We have the consistency, with the BBC also naming us as one of the top three artisan sausage producers in the UK and the FT placing us as one of the top five best bacon curers.”

Despite Jane and Terry’s hard work attracting clients including Jamie Oliver and TV chef James Martin, and moving the business into new state-of-the-art, purpose-built premises on the farm, their feet remain firmly on the ground and they retain a dedication to their roots and core business.

“We are committed to ensuring the business remains local, and we keep selling in person to customers at farmers’ markets in and around Lincolnshire,” says Jane. “We’re still the same business, whatever the size of client or who they are.”