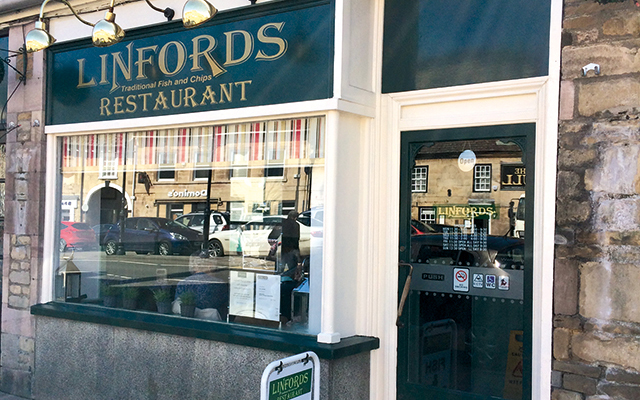 The Deepings are amongst the most historic and picturesque villages in the county. Caroline Bingham visited Market Deeping and Linfords, the family run fish and chip restaurant run by Paul and Pat Linford.
Linfords takeaway and 30-seater restaurant are in the Market Place, a busy hub of activity but it wasn’t difficult to find parking close by. The fresh green and cream colourway of the outside signage is replicated in the restaurant interior, which is well laid out and immaculately maintained. The decor features exposed stone walls as well as panelling and wooden flooring.

I was visiting for lunch and shown to a booth table by a very smiley waitress – the service was very friendly and efficient from all the staff – and my order for a pot of tea was taken while I looked at the menu.

Paul was busy in charge of the fryers so I cracked on with deciding what to eat. There is a broad menu, beginning with fish choices of cod, haddock, huss, or plaice, which can be battered or steamed. You can also enjoy salmon served steamed. If you want to waive these traditional options there is scampi, fishcakes, a choice of pies as well as burgers and sausages, chicken strips and plenty of side orders such as salads and homemade coleslaw.

Two special highlighted options are the Children’s Menu for under 12s and the Linfords Restaurant Specials; one for Lunchtime and the other All Day. The Lunchtime Special looked just the ticket for me; a smaller cod fillet, served with chips, bread and butter, tea, coffee or a soft drink for £6.85. I added a side order of mushy peas, which are one of my favourites.

The generous portion of baguette slices soon appeared with packs of butter and my lunch not long after. One of the joys of fresh fish and chips is the crispness of the batter which is nearly always lost if they are wrapped in paper. Paul is a second generation fish fryer, not put off by the discipline of the 7.30am starts first learned from his parents, who owned a similar business in Peterborough. Paul has perfected an extremely light batter, giving the de-skinned and de-boned fresh fish a dusting of flour before it is dipped and placed in the fryer. The final result is an almost tempura lightness to the batter and a milky, steamed texture to the fish. Served with their own cut chips, parsley and a wedge of lemon, it really is the complete, very satisfying meal.

To follow, there is a choice of equally tempting traditional sponge puddings and ice cream but I had to leave those for another day and opted instead for a cappuccino.

There had been quite a rush of other tables filling up around me but once this died down, Paul’s smiling face appeared, full of enthusiasm for his business, which he and Pat have been running since 1989. Linfords is open seven days a week, lunchtime and evenings, with Monday evening gluten-free between 4pm and 8pm; just one of the innovations which has seen the business win numerous local and national awards including a Community Award from the National Federation of Fish Fryers and placed in the last ten of the Chip Shop of the Year for the last five years.

The restaurant is also licensed, serving wine and beer, which has made it a frequent venue for wedding suppers, receptions and other special occasion celebrations. Pop down and pay a visit and while you are there discover more of this charming part of the county for a wonderful day out.