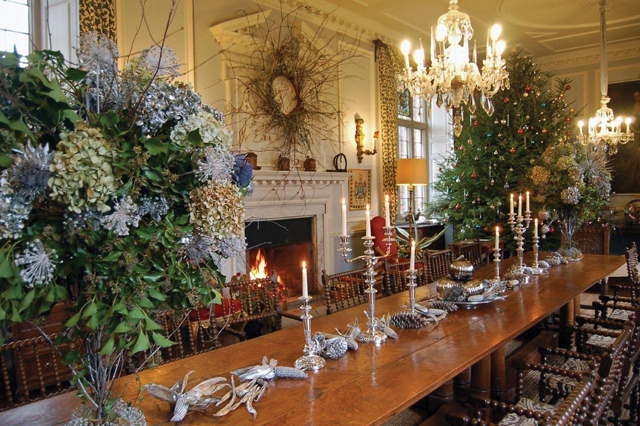 Make it a Lincolnshire Christmas

Rejoice and sing Crying Christmas, for ‘tis the season to go Mumping, throw the Haxey Hood, anoint the Boy Bishop, tuck into frumenty and play turn-trencher.
A traditional Christmas can mean many different things, from the food on your table to honouring family customs, but Lincolnshire itself boasts both centuries of history and ample opportunity to boost the local economy – all in the name of festive fun.

Whether toasting the season with a pint of Bateman’s, buying Christmas trees, gifts and food from Doddington Hall or making a present of a mouth-watering range of local produce, the county is a one-stop shop for Christmas.

The Yuletide season starts with the ancient Lincolnshire ceremony of ‘Crying Christmas’ – a fifteen-verse poem recited by three local Waites. Perhaps performed as a variation of the Mummers plays so popular during this time, it had, until recently, fallen out of favour. First documented in 1480, it encourages people to celebrate Christmas in a fit and proper manner or suffer the ‘grevous ponyishment’ that will befall them.

The whole of December has, at times, been ruled by the Boy Bishop – the medieval custom of anointing choirboys, first common on St Nicholas’ Day, 6th December, and later moved to Holy Innocents’ Day on 28th December. The chosen boy – picked by the ‘real’ Bishop or his peers in the choir – took over a Bishop’s duties and robes, and even preached sermons and toured local communities.

The perfect time for parlour games – and probably far safer than the hockey-like sport of cabsow (or ‘shin-up’) played in Grimsby on Christmas Day – turn-trencher is a game of forfeit, requiring players to pick an item found in a lady’s ‘toilet’ – be it ring, comb, brush or face powder. The leader spins the ‘trencher’ plate and, after saying “my lady is going out and needs her…”, the player whose item has been selected has to catch the trencher before it falls. Alternatively, upon the revelation that my lady needs the whole of her toilet, the last person to find a new seat pays a forfeit.

On 6th January, the Feast of Epiphany, witnesses a far more aggressive game: the historic scrum of Throwing the Haxey Hood. Symbolic of the windswept hood chased by Lady Mowbray whilst riding to church, the modern Throwing pits the villages of Haxey and Westwoodside in a battle to throw or kick a roll of canvas to their respective local pubs. Often lasting for hours, and with injuries frequent, the rewards of hot ale, rum and furmenty seem somehow inadequate.

Christmas Eve was a time to go a’Wassailing to hail Pomona, the goddess of fruitful abundance, and awake the good spirits of the orchard to ensure a successful harvest. A raucous procession of singers, drummers, horn-blowers, bell-ringers and even riflemen serenade the trees with an offering of wassail – a rich trifle-like concoction of cider, spices, roasted apples and cream topped with cakes or toast – which is first drunk by the wassailers and then ‘fed’ to the trees via root and branch.

Whether known as Mumping, Gooding or Thomassing, the St Thomas’ Day ritual of women and children begging for wheat, coal or money helped families provide a feast at Christmas. In Grimsby, children paraded through town with a wax doll, singing carols, asking for money.

Such provisions are far removed from Lincolnshire’s rich culinary heritage, which offers some delicious new options for the Christmas table, as well as ample outlets for popular dishes.

Lincolnshire goose is a more traditional alternative to turkey, but it is in the trimmings and accoutrements that the county really sets the taste buds tingling. Lincolnshire pork sausages are a must for the Christmas table – especially wrapped in a blanket of locally-produced bacon – and haslet, the pork, onion and herb meatloaf, is as delicious a complement to turkey as traditional stuffing.

Those who prefer duck as the centrepiece of their festive feast may add a bed of salty samphire or, for those wanting something really different, use it in its element to set off the flavours with a spectacular fish dish.

The full, ripe flavours of both Poacher and Lincolnshire Blue makes cheese a vital ingredient, either to stuff a turkey, chicken or duck breast; spice up a Boxing Day soup; at supper with figs or plums; or simply as part of a satisfying cheeseboard. Stuffed Chine and a fine pork pie are ideal cornerstones of a festive tea – leaving less room for turkey sandwiches – and perhaps followed by a helping of an old agricultural staple, frumenty: a wheat and milk pudding laced with dried fruit, almonds, sugar and even brandy.

Lincolnshire Pudding, with its mix of fruit, carrot and potato, provides a lighter alternative to Christmas Pudding; as does charter, an apricot custard made with cream, eggs and lemon peel. Grantham Gingerbread is a spicy, warming snack on chilly days, and a slice of tea-soaked plum bread or even the lardy fourses cake will satisfy the most demanding of appetites.

There are, of course, many local suppliers who would grace the festive table as well as Lincoln’s Christmas Market, such as Scargall’s honey, Market Rasen’s Home Farm Fowls, plum loaf from Myers, ice cream from the centenary-celebrating Appleby’s, Pocklington’s bakery, or A Little Luxury’s award-winning preserves.

From Somerby Vineyards to several real ale breweries, of which Bateman’s is the biggest – not to mention Bailgate’s cavern of single malted delights, The Whisky Shop – Lincolnshire provides tipples for everybody’s taste with which to toast Christmas or maybe fuel Santa’s journey around the world.

Regional craft-makers – whether artists, ceramicists, jewellery-makers, textile artists or even chocolatiers – also provide a fabulous range of unique presents. In addition, the area hosts several hand-crafted greetings card designers and toy makers to rival the high street retailers and keep Christmas closer to home. Be it the timeless Steep Hill or Grimsby’s stylish Abbeygate, a shopping expedition off the beaten track will be richly rewarded.

However you’re spending Christmas, it remains a time for family and friends, fun and, yes, food. As the ninth verse of Crying Christmas exhorts, ’tis the time to eat, drink and be merry.

‘Bycause that holye tyme all good people do prepare
Aswell kynges and quenes that is of most noble byrthe,
As also dukes, erles and lordes royally wyll faire,
And spend the tyme of Crystmas w’ joye and myrthe.’