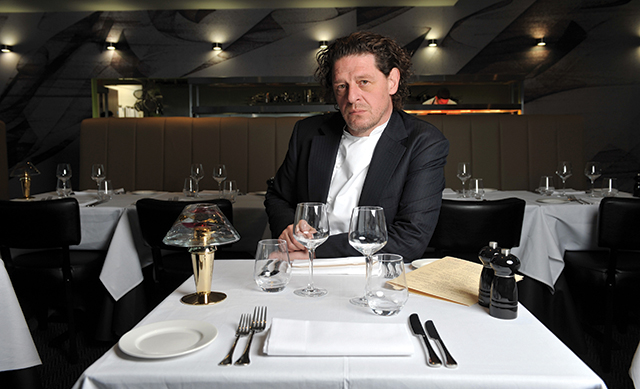 The DoubleTree by Hilton on Brayford Wharf is the location of the newest Marco Pierre White Steakhouse which opened in their fifth floor restaurant at the end of July.
The 100 cover restaurant has been transformed with a six figure refit to create a warm and inviting interior, mixing flashes of copper and brass with dark woods and feature lighting. Floor to ceiling glazing offers fabulous views across Lincoln and the Brayford. Offering a comfortable yet luxurious dining experience, the classic but contemporary finish complements the adjoining Electric Bar.

The menu has been designed to offer affordable and glamorous dining with starters including Welsh Rarebit with Poached Egg, Wheeler’s Atlantic Prawn Cocktail, Marco’s Lobster Macaroni and Crispy Devilled Whitebait.

Finish off your meal with an indulgent dessert such as New York Baked Cheesecake, a Classic Knickerbocker Glory or The Box Tree’s Eton Mess.

“It’s incredibly exciting to be able to welcome Marco Pierre White to the DoubleTree by Hilton Hotel in Lincoln,” said Richard Metcalfe, general manager. “I think it’s going to add something very different to the current dining scene, which people will love.”

Bookings are now being taken and can be arranged by calling 01522 565182 or visit www.mpwrestaurants.com

Once upon a time rice was an expensive import and only the rich ate rice pudding. Thank goodness things have moved on since medieval days. The trick is to cook it slowly on a low heat. For many, proper rice pudding is the epitome of comfort food.

On a pan, melt the butter on a medium heat. Add the rice and stir. Add the sugar and stir until it dissolves.

Add the cream, milk and one split vanilla pod. Stir well. Slowly bring to a gentle simmer. Remove the pod and scrape out the seeds, returning them to the pudding.

Bake the pudding for about an hour in the pre-heated oven.

While the pudding bakes, use a stick blender to make a puree of the six of the apricot halves. Put to one side.

Place the remaining apricot halves into a saucepan and add the remaining vanilla pod. Pour in the syrup from the tin and very gently bring to the boil. Remove from the heat and allow to infuse.