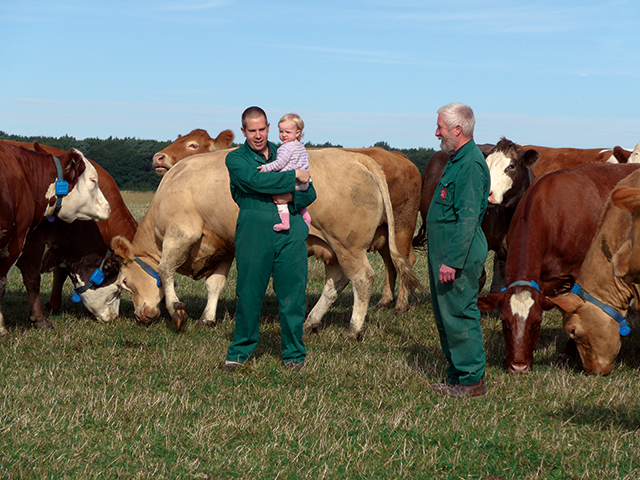 THE LINCOLN TEA AND COFFEE COMPANY
Many varieties of tea can be served cold over ice. Black tea served with a slice of lemon or even orange peel is very refreshing.
How about coffee? My favourite dessert is Affogato. Vanilla ice cream with a shot of hot espresso poured over the top. Easy and delicious.

Why not make a coffee milkshake…

Blend all ingredients until smooth and frothy. For a sweeter milkshake add a shot of flavoured syrup. I love this drink on a hot day.

The Lincoln Tea and Coffee Co, Select Lincolnshire’s Current Wholesaler of the Year award winner. We drink what we sell, we do what we say and we love what we do. Call 01522 681838 thelincolnteaandcoffeecompany.co.uk.

GREENS STORE OF BASSINGHAM
Bought by Tracy and Michael in November 2015, Greens has been the hub of Bassingham and its outer lying villages since the eighteenth century, and apart from a relatively short break, the store has been home to the local Post Office since 1750.

With a passion for supporting the local community, their motto is: ‘Traditional, Local, Affordable.’

Tracy said: “We source local, quality products, from giftware, arts and crafts, through to our milk, bread and fresh fruit and vegetables. We are a central hub of the village and vital lifeline for some of our customers. We are able to help with banking, postage and grocery needs and we have a fabulous range of cards and unique giftware. Our aim is to create a sociable and cheerful time in the shop for all our customers.”

MINTING PARK FARM
Minting Park Farm is a family run 600 acre mixed farm. It has been almost thirty years since Henry and his family moved to Minting Park Farm from Essex. The farm is a real labour of love, and is now home to ninety breeding cows, seventy-five breeding ewes and ten British Lop sows, as well as growing grass and lucerne, wheat and barley.

Their farm butchers shop opened in December 2006 to market their own beef, lamb, mutton and pork. Their motto is ‘Born on the Farm, Grown on the Farm, Sold on the Farm.’ Other products include their own free range eggs, local honey, rapeseed oil, real ales and ciders, and homemade preserves. Since opening, Minting Park Farm has won over 50 awards for their produce including East Lindsey Food Business of the Year 2017 and Lincolnshire Life’s Taste of Excellence Farm Shop of the Year 2016.

In November 2015 they opened the Farmhouse Kitchen, where they produce and sell a wide range of cooked products, to include, pork pies, steak pies, sausage rolls, black pudding, cooked meats and cakes using home grown ingredients.

A new addition is ‘The Harness Room’ where visitors can enjoy a bite to eat, tea, coffee and homemade cakes.

Minting Park Farm is open Thursday and Saturday 9am – 4pm, or by arrangement. For more details visit www.mintingparkfarm.co.uk, follow the Facebook page or call 01526 398373.

MELLOR’S BUTCHERS
The Bullring in Horncastle has been home to Mellor’s Butchers since 1992. Owned and run by Ken Mellor and his family, the premises are the perfect place to sell his beef which he rears on his farm nearby.

Ken first bought his small holding in 1965 where he reared pigs, before introducing cattle in the mid ’70s.

Ken said: “When we first bought the shop it was an empty premise and we felt it was the perfect place to sell our own beef. We also work closely with other farmers in the area to stock lamb and pork. At the shop we make all our own pies and sausages.”

Mellor’s Butchers is open Monday to Saturday, with early closing on Wednesday and Saturday. Visit Ken and his family at 2 The Bullring, Horncastle or call 01507 524887.

SPECIAL EDITION CHOCOLATE
Rosanna has been at the helm of Special Edition Chocolate for over twenty years. With a background in teaching Home Economics and a self-confessed chocoholic, when the opportunity came up to buy a small chocolate business in the Lincolnshire Wolds she snapped it up. Since then she has expanded the business to include a café which is open seven days a week. Rosanna has in her time also visited Venezuela and spent time learning where her chocolate comes from and had the chance to make her own chocolate from the cocoa beans.

With her extensive knowledge of chocolate, she has won many awards in her time including three European and one international award.

The shop and café is full of exciting flavours and customers can try over sixty varieties including mint, popping candy, dark, milk and white. Some of the most popular flavours include rhubarb, salted caramel, coffee and ginger (which is their flagship flavour), lemon and lime.

With Rosanna at the heart of the business, welcoming guests, she has two employees who are behind the scenes creating these masterpieces.

G SIMPSON BUTCHERS
Having expertise and passion for your chosen profession is a winning formula that is hard to beat.

Such is the case for Gary Simpson who started his butchery business single-handedly in Heckington in 2000 and developed it into a thriving enterprise adding shops in Sleaford, Stamford, Spalding, Lincoln and South Hykeham.

Simpsons Butchers has won a string of awards along the way with the most recent title of Britain’s Best Butchers Shop for 2015-16 capping off an impressive rise to the very elite of the butchery profession for Gary and his dedicated team.

Many more awards have been awarded to Simpsons over the years including all six stores being accepted into the prestigious Q-Guild of Butchers – an exclusive group of only 110 businesses in England, Scotland and Wales.

Gary has recently been chosen to represent Team GB in The World Butchers’ Challenge in Queensland this September as part of the six-strong home team and is delighted and honoured to represent GB on a world stage.

This is quite a remarkable achievement for a first generation butcher, with no family history in the industry although it’s no surprise to anyone who knows Gary or works with him.