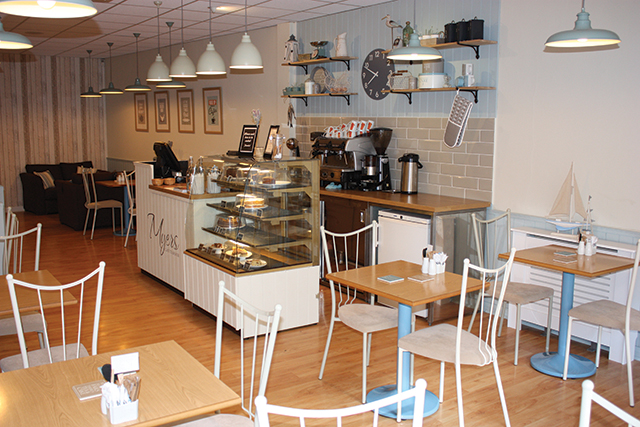 The summer season is upon us, the perfect time to get out around the county and visit some of our award-winning tea and coffee shops to bring you the best county lite bites. This month we visit Myers Café Tea Room in Horncastle.
Well known for their Plum Bread, which was first made in 1901, the Myers family has a long history in the county. They have been at their current address in Horncastle since 1969, where they had their bakery, before opening the Café Tearoom in 2001. The Deli followed in 2009.

The visit came on one of the warmest days so far this year, so it was nice to be in a lovely air-conditioned premises. The café has a contemporary New England feel, using blue and cream tones to enhance features such as the shutters on the windows. Aside from the weekly specials board, other touches included wall art which came from Myers’ home and giftware store, The Country Stile, which is just around the corner from the tea room and bakery.

The café was bustling when we arrived and the atmosphere was lively. We were shown to our table, which had been reserved in the window so we could make the most of people watching out the front. We were swiftly offered a glass of water, which was much needed, and given the café menu to peruse. There is something for everyone on the menu including breakfasts, light lunches and afternoon teas. Many of the items are handmade by Myers’ craft bakers and available to buy in the family bakery, from the freshly baked breads and other savouries such as pork pie and haslets to scones, tea cakes and their award-winning Lincolnshire plum loaf. Myers work closely with local producers which include Mountains of Boston, Gary Simpson Butchers, Meridian Meats, and also serve locally produced cheese and chutney.

Both myself and my guest, Lincolnshire Life’s sales manager Sarah Eddy, were feeling quite peckish so opted for something slightly more substantial.

Sarah opted for the ham, egg and chips served with a side salad. The ham is home cooked on the premises and when asked for her opinion during the meal Sarah’s first comment was how fresh the meal was from the meat to the salad.
I chose the chicken burger and had it served with bacon and bbq sauce, a favourite of mine. Again I couldn’t fault the freshness of the food, it was served quickly after we ordered, and was piping hot, delicious and tasty – just how good food should be.

To complement our meals we each tried one of their coffees. As a coffee addict, I like to think I know good coffee, and the brand they are using, Grumpy Mule, is a new firm favourite.

Although we were offered a slice of cake, neither of us could eat any more. The homemade cake range varies daily and is made by Jane Myers. The cakes are only available in the café, so a visit is well worthwhile!

It’s nice to get out in the county and try new eateries. The family are on to a winning formula with not only a café, but also a baker’s and a deli. I look forward to visiting again soon.