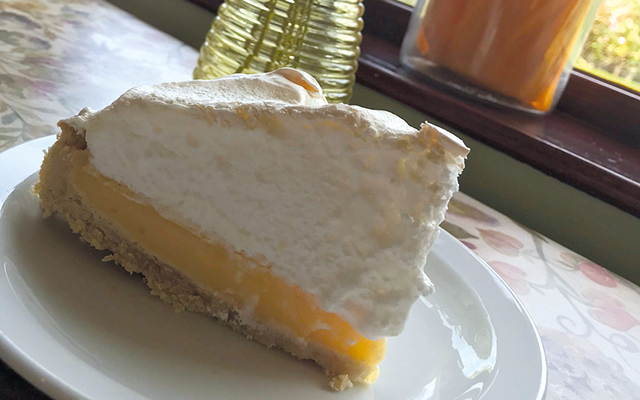 This month Katrina Burrill visits Norburns Coffee Shop in Tetney.
Many will know Janet and her husband from the Garden Centre that used to be on the site. With the expansion of the centre the couple felt a coffee shop would add an extra benefit to customers and the café was opened in 1995. Fourteen years later in 2009 the couple decided to retire and closed the coffee shop before their son Stephen and his wife Maureen reopened it in 2011.

Unfortunately family commitments meant he was unable to continue to manage the premises, and not wanting to close such a community hub, Janet came back to manage the shop in 2013. Since then the business has continued to flourish and their lunchtime trade is as busy as ever.

When we arrived we were shown to a table and given time to peruse the menu. Whilst the menu had a selection of sandwiches and paninis, our waitress mentioned the hot choices were a speciality so we decided to try these. The hot selection changes every day and includes choices such as cottage pie, steak pie, liver and sausages, braising steak and chicken casserole. All their meals are made fresh on site daily, so they are served on a first come, first served basis. On our visit my guest opted for the liver and sausages, which was served with mashed and roast potatoes, carrots, cabbage and mushy peas. I chose the steak pie with mashed and roast potatoes and carrots, with a healthy helping of gravy. Both our meals were beautifully cooked and very fresh. Janet had told us that she only uses fresh local produce and this shone through the meal.

During the day the coffee shop offers a main and dessert with coffee or tea for £11.50 so it would have been rude not to try some of their desserts. There were plenty of homemade choices including trifle, Bakewell tart and crumble. I opted for the chocolate and raspberry gateau which was wonderfully delicious and my guest opted for the rhubarb crumble with custard which he said took him back to his childhood.

Many of the customers visit the coffee shop many times a week and use it as a meeting place. We came on a Tuesday and lunch service was bustling.