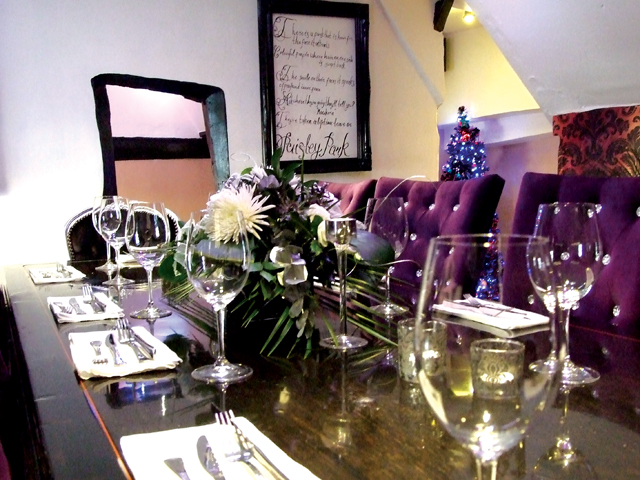 Caroline Bingham visited Onjance 1 in Newark for a lunchtime treat
Newark’s Castlegate is a real dining thoroughfare with many cafés and restaurants occupying both sides of the road. It is hard to imagine going there and not finding something to suit your mood and taste. From whole food to fast food; light bites to fine dining, there is such a variety on offer.

Onjance 1 opened at 57-59 Castlegate in September and is owned by the family who already operate The Trivet, a day café on Chain Lane. Onjance 1 (the name is derived from one of the partners’ young daughter’s interpretation of ‘orange juice’), is a day café and restaurant which opens its doors at 9am, six days a week, for breakfast and seamlessly works as a lunch then evening rendezvous with the kitchen open until 9pm.

Housed in a three-floor building of great character, the frontage gives little clue to the contemporary design and glamour that the interior has been given.

We visited for lunch on a Friday and although we could have stayed in the bar area by the entrance we chose to sit at a table upstairs. Chris, the manager, greeted us and took us up the winding staircase. The décor is very opulent and includes feature walls, sumptuous colourways and metallic highlights. On the first floor we passed a private dining area large enough to seat ten around the elegant table. A relaxing drinks area with leather sofas is alongside. We passed through to a second dining area which had been set up for a cocktail evening later that night.

Our table was one of four in the upper dining room and we settled into very comfortable, white, Z design chairs. The day menus included some very tempting breakfast options and great sounding open sandwiches, but we chose from the Let’s Do Lunch menu. Some delicious, warm, home-made ciabatta arrived with a lightly garlic flavoured butter to begin with. Quite delicious.The quality of the baked goods served at Onjance is exceptional and a credit to one of their talented cooks who trained as a pastry chef.

My companion chose a creamy garlic mushroom melt which consisted of griddled mushrooms tossed in a garlic and cream dressing, under melted Cornish brie on toasted white soda bread and served with mixed leaves and a Balsamic drizzle. I chose vegetable Nantes, a dish of goat’s cheese melted over fresh baby tomatoes with roasted pine nuts and mango marmalade served on toasted ciabatta with mixed leaves. Both dishes were beautifully presented and were extremely tasty.

I had a look through the evening menu before we decided if we could manage a dessert. There were firm favourites such as seasonal pate and fresh mussels and also interesting twists on goat’s cheese served over black pudding and Romano stuffed peppers. There is a choice of seven main courses including tenderloin pork fillet cooked in an apple and cider reduction and fresh salmon fillet marinated in lemon and chilli. All desserts are home-made with great skill by the previously mentioned pastry chef.

I couldn’t resist trying one for myself and I opted for the New York vanilla cheesecake with tropical coulis and fresh cream. My companion chose fresh scones with cream and preserve.

My cheesecake was a classically baked version with just the right level of satisfying, creamy, soft density and swirls of coulis throughout. I cannot remember the last time I was served what to me is a proper version of this cheesecake. Such a delight compared to the gelatin set or frozen varieties which are usually served.

My companion’s two scones were served warm from the oven with lashings of cream and preserve. He borrowed Michael Winner’s phrase when he described them as ‘historic’.

We both finished the lunch with a cappuccino.

There is undoubtedly plenty of talent in the kitchens at Onjance 1 and they seem to have mastered the tightrope of effortlessly offering a range of menus to suit occasions all through the day. Whenever you visit you are sure of a warm welcome and tasty treats.