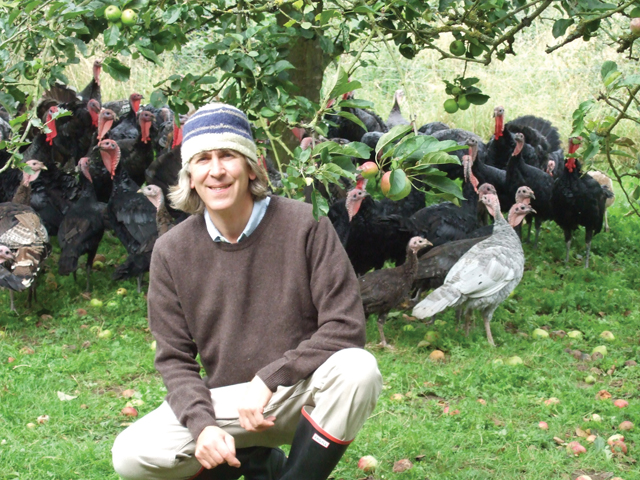 One Lincolnshire farmer is looking for shoppers to step away from the supermarket this year and make their festive fare one hundred per cent local and organic.

While you may not be planning anything more exotic than turkey, vegetables and all the trimmings while watching the Queen’s speech this Christmas Day, you can add a twist by making sure what’s on your plate is both locally produced and organic.

One man working hard to ensure the county’s shoppers have this option is Woodlands Farm owner, Andrew Dennis. A member of the Country Land and Business Association, Mr Dennis’ 690-acre farm, which was established by his family in 1870, lies on the Fens in South Holland, five miles south-east of Boston. It is home to not only organic turkeys, but pedigree cattle and acres of vegetables too.

His flock of turkeys was established in 1996, the year it was decided the farm would be one hundred per cent organic, and is widely acknowledged as the first in the county.

“The cost of producing cheap, conventional food was becoming ever more apparent – in terms of its potential damage to the soil, the landscape and human health,” said Mr Dennis. “It was recognised that organic farming provides an alternative approach by producing food in a way which addresses these concerns.”

The Woodlands flock consists of traditional bronze and black breeds, with some rare Lavendar Blues and Bourbon Reds. It is a closed stock, with Woodlands Farm breeding and rearing its own stock. They go into a heated barn when they hatch in April/May, and then from six weeks old they run in the paddock and the orchard.

Slaughter begins on 5th December, and Mr Dennis is a qualified slaughterman. This process is supervised, with every bird slaughtered individually away from the other birds.

“It has been of special concern that the slaughtering should be carried out humanely,” said Mr Dennis. “Sooner than transport our birds to an abattoir, which can be stressful, this is carried out when the birds are out of sight of each other on their home territory. Our concern is to provide the birds with dignity in death as well as in life.”

He feels that the Norfolk black hen is the tastiest bird, and the tenderest, with a good gamey flavour, although it has a small breast and is a small bird (three to four kilos feeding eight to ten people).

However, Woodlands has a problem this year. Traditionally, the farm has 300 turkeys, but this year they have around 120 because the cold spring meant the eggs didn’t hatch properly and a fox managed to get into the paddock. As a result, it means that the farm is likely to sell out this year, but it has lined up another similar organic farmer in Rutland to help it to fulfil orders.

Woodlands Farm also offers chicken and game, and if anyone is looking for something less traditional for Christmas lunch, then everyone on the farm recommends their organic fillet steak. They have one of the only pedigree herds in the country, specialising in Lincoln Red cattle.

Whether you go with turkey or steak on your plate, you can accompany it with organic carrots, potatoes, the ubiquitous sprouts, and a selection of seasonal vegetables that have been grown on the farm in the grade one alluvial silt soil.

While the cost of organic food is widely perceived to be higher than non-organic, Woodlands Farm proves otherwise. Staff regularly check supermarkets to ensure that produce is competitively priced. Mr Dennis explains that farming organically is a more expensive system, with “higher production costs and more staff needed to control weeds, often by hand, for example.”

He added: “Consumers benefit by buying direct from the farm, there is no supermarket profit margin to pay and our produce is often cheaper than the large stores. In terms of taste, let alone in terms of creating rural employment, we believe we have a product that is better for your taste buds and for the community!”

Those wanting to buy produce from Woodlands Farm this Christmas should call 01205 724778 or visit: www.woodlandsfarm.co.uk