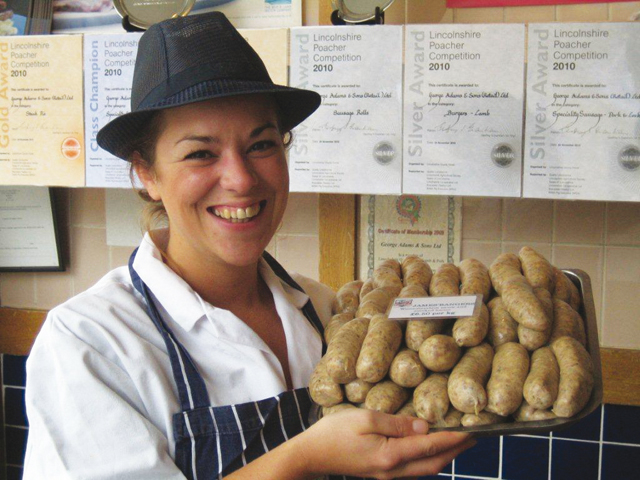 When it comes to food Lincolnshire is a leading light. Named the Food Capital of Britain 2011, the county is home to some of the tastiest produce, with the renowned Lincolnshire sausage topping the list when it comes to culinary excellence.
This county delicacy is held in such high regard that a campaign to give it Protected Geographical Indication (PGI) status under European Law was launched by a group of butchers in 2001. If successful, their bid will help boost the county’s economy and tourism, preserve a true piece of county heritage and help ensure the Lincolnshire sausage is not corrupted by alternative recipes.

Long revered for its distinctive sage flavour, the Lincolnshire sausage is characterised by its open, chunky texture – the result of the pork meat being coarsely ground rather than minced. Butchers campaigning as the Lincolnshire Sausage Association (LSA) say that in order for a sausage to qualify as a true Lincolnshire one it must be made in the county and to a specific recipe – containing at least seventy per cent British pork, breadcrumbs or rusk, sage, salt, pepper and water all in a natural casing.

Their long-running battle was dealt a serious blow in May, when the Department for Environment, Food and Rural Affairs (Defra), rejected the application on the grounds that the recipe can be reproduced anywhere in the UK, that is has been made outside Lincolnshire for over twenty years and that as many as ninety-five per cent of Lincolnshire sausages are made in other areas.

Undeterred the LSA has appealed against Defra’s decision, claiming its application was not considered in enough detail. It has submitted new evidence, including an online petition which garnered more than 1,000 signatures, and argues that Lincolnshire sausages have been made in the county for at least 150 years, with approximately 150 county butchers producing them, using family recipes that have been handed down through the generations.

LSA chairman, Janet Godfrey said gaining PGI status is vital to the county’s economy, adding: “Many people visiting Lincolnshire appreciate the distinctive qualities of the true Lincolnshire sausage and many visit the county specifically to buy them.

“We have over 150 Lincolnshire sausage makers in the area and sausages are often a significant part of their business. If production could be increased it will help these small businesses survive in an economy dominated by large supermarkets. We have already lost far too many butchers from our high streets.”

She said that many producers would be able to expand their production to cope with extra demand too, thereby making their businesses more profitable, adding: “It will also encourage larger manufacturers into the county in order to produce ‘proper Lincolnshire sausages’ and they would not be able to corrupt the recipe.

“PGI status would help to put Lincolnshire on the map as far as tourism is concerned – the more publicity and the more reasons for visiting Lincolnshire the better, especially when you know that your full English breakfast is going to include a proper Lincolnshire sausage!”

PGI status is designed to promote and protect the names of quality agricultural products and foodstuffs, by ensuring that only those genuinely originating from a region are allowed to be identified as such.

There are laws to protect wine, cheese, ham, seafood, beers, bread and numerous other products and if the Lincolnshire sausage’s status is confirmed it will join the likes of Gorgonzola, Melton Mowbray Pork Pies and Champagne, which can only be labelled as such because they come from the designated region.

Spalding butcher, George Adams and Sons Retail has been making Lincolnshire sausage since 1910 and company director, Mary Adams says protected status will let customers know exactly what they are buying, while ensuring a top quality product, which has been produced by skilled workers.

She said: “Achieving the status is important; there are lots of other sausages being sold, poor quality imitations, that are damaging the reputation of the Lincolnshire sausage.

“This will put a quality benchmark on what people can expect from a true Lincolnshire sausage, which is a very coarse, loose meat. It’s very distinctive and that’s not represented in a lot of the supermarket or mass produced variations.

“My family name is synonymous with Lincolnshire sausage and it just seems a shame if we cannot protect it.”

Wyberton butcher, Stuart Ashton said the Lincolnshire sausage sums up the county, not only for natives, but everyone else too.

“You expect a Cornish pasty to be made in Cornwall, and once you’ve had one from there everything else pales in comparison, the same can be said of our sausages.”

Seventh generation butcher Neil Curtis, of Lincoln, added: “Lincolnshire sausage is great for the county and also for the people.

“You only have to look at how the Lincolnshire Sausage Festival has been promoted, it’s really taken off, going from strength to strength each year and shows just what depth of feeling there is within the county – it really is one of our favourites.”

The LSA is taking legal advice regarding its next steps and will continue with its fundraising appeal to cover the cost of this, while it awaits the outcome of Defra’s decision. The government department has said it will carefully consider the matter as soon as possible, although it has no timescale in which to deliver its verdict.

In a statement, food and farming minister Jim Paice said: “British food is outstanding and we’re working hard to protect the local heritage of certain foods through PGI status. But with so many variations on the recipe, and ninety-five per cent of sausages sold under the ‘Lincolnshire Sausage’ label being made outside the county, the application as it stood could have seriously damaged businesses and jobs.

“We remain open to looking at other options which would allow producers in Lincolnshire to highlight the traditional and local nature of their sausages without potentially damaging the overwhelming majority of manufacturers.”
Defra has suggested that a bid to protect the name ‘Traditional Lincolnshire sausage’ may be more successful but the LSA is adamant its case is strong enough to warrant full status.

You can still sign the LSA’s online petition at www.change.org/petitions/lincolnshire-sausages and anyone wanting to contribute to the LSA’s fighting fund can send cheques made payable to the ‘Lincolnshire Sausage Association’ c/o RJ & AE Godfrey, Wootton Road, Elsham Top, Brigg, North Lincolnshire DN20 0NU.