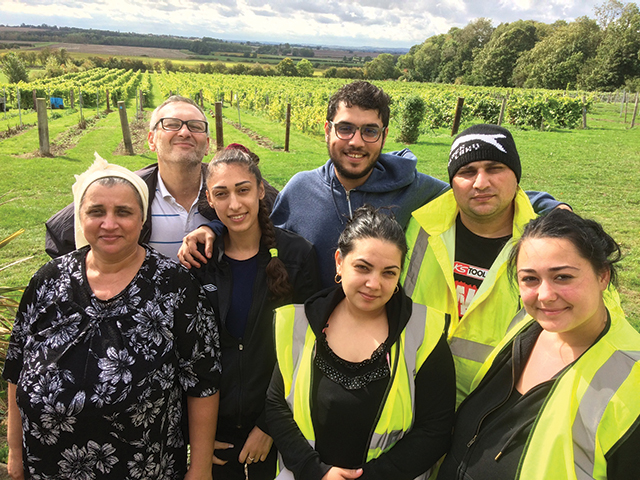 Raise a glass to excellence

Guests at the Lincolnshire Life Taste of Excellence Food Drink and Hospitality Awards on 1st November will be welcomed with a glass of Solaris 2016 courtesy of the county’s premier wine producer, Somerby Vineyards. Caroline Bingham went to witness the 2018 harvest.
I last visited the Somerby Vineyards seven years ago when the new winery had just been completed ready for pressing the 2011 harvest of Solaris and rows of Rondo vines were newly planted.

Bill Hobson still owns the vineyard where he works closely with oenologist Ed Templeman, who joined the business in July 2012, bringing a wealth of knowledge and experience to the operation.

“It has been ideal weather this spring and summer. I think this will be a vintage year,” said Ed as we walked down to where the trailer was being loaded with trays of freshly picked grapes. Picking up several bunches Ed pointed out the near perfect, triangular formation of many of them, lack of mildew and virtually non-existent rotting of fruits. He handed me some to taste and although I am always surprised how small wine grapes are compared to dessert grapes, the intense juiciness and sweetness was evident.

“Harvesting is always weather dependent but we are a good three weeks earlier this year than last and it is a narrow window to gather them at their peak. Solaris is first and then we will pick the Rondo nearer the end of September.” (The Rondo vines are the ones I saw newly planted and they are just beginning to bear fruit.)

“It really takes ten years for vines to fruit, and come to their best at fifteen years. They live up to seventy-five years but you find that you sacrifice some quantity of fruit for a better quality over time.”

Ed has not always turned his palate to wine. He began in the tea industry but always hankered to be in production rather than sales. His skills were ideal for the wine industry though so in his thirties he took a degree in viticulture and oenology at Plumpton College, East Sussex, the UK’s centre for excellence in wine. After graduation he worked in Germany and Alsace before being recommended to work for Bill by one of his former tutors.

There have been some significant changes which Ed has instigated, including ripping out some Phoenix vines to concentrate on more suitable varieties which produce the signature Solaris white, Rondo oaked red and Pinot Noir sparkling white.

“Solaris is a bone dry white, with an acid backbone. This wine is really becoming interesting, picking up the minerality of the Wolds chalk beneath us. There are complex flavours of ripe fruit too, such as pear and melon. This year’s production is potentially very exciting; our best year yet.”

The white has received recognition in the industry with Solaris 2014 winning Gold at the UK Wine Awards and Solaris 2016 facing judges including Jamie Goode and Oz Clarke, winning Bronze at the International Wine Challenge last year. After pressing, the white wine is kept in the stainless steel vats in the winery for a year; in the case of the red it is kept two-thirds in stainless steel and one-third in oak before being filtered, bottled and stored at 12°C for a year.

The harvest was being picked by members of the extended Cristi family who are based in Boston. The day was glorious but the work requires stamina, dexterity and endurance. I will raise my glass to their labour as well as to the potential of Somerby Vineyards while we wait to see if the 2018 vintage fulfils its promise.

Tastings and tours of the vineyard can be arranged for groups between Easter and mid September. Contact: www.somerbyvineyards.com or call 07523968341