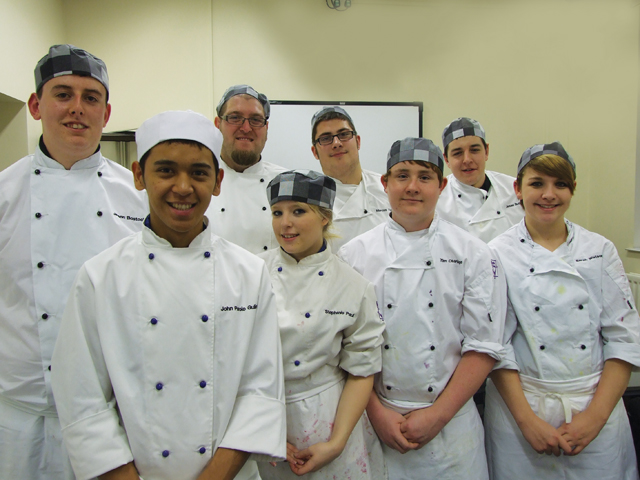 Caroline Bingham was one of the judges for the first of this year’s Cuisine Awards finals – Young Chef of the Year
Lincoln College was the venue for this year’s Taste of Excellence, Young Chef Competition and four finalists stepped up to the hot plate to each prepare a three course meal in two hours.

Stephanie Paul (17), Jason Bostock (17), Jesse Butler (17) and Sarah Watson (16) had devised their menus to reflect the season, their own skills and Lincolnshire sourced ingredients. As ever, I was totally in awe of the challenge which faced them and their ability to deliver ambitious and delicious food within such a short timescale.

The heat was definitely on as even on a chilly November afternoon the temperature and tension in the skills kitchen was high.

I asked each finalist what they thought was the greatest challenge in their menus. Jason and Sarah both agreed it was to serve their fish to perfection and avoid over cooking. Jesse felt his challenge was to deliver a perfectly risen soufflé while Stephanie thought her dessert of Bramley apple and blackberry and its square pastry case would test her ambitions to make a career as a pastry chef.

After tasting all the courses there were some memorable highlights. Stephanie’s pan fired cod with lemon pesto, bacon rosti and deep fried leeks made a perfect autumn starter; Jesse’s roast monkfish with fondant potatoes, green beans, mussels and Parma ham with a very mouth watering sabyon sauce was a delight and Jason’s apple and cranberry crumble with vanilla ice cream stood out as his top scoring dish.

The overall winner was Sarah Watson who served three excellent and consistent dishes. Her starter of green pea soup served with a goat’s cheese and mint quenelle and garlic croutons was subtle, sweet and smooth. Her main course of pan fried cod served on a bed of courgettes and wilted spinach, drizzled with curry oil really hit the spot. Sarah’s dessert was a vanilla panacotta with a hint of lemon served with fruit coulis. Congratulations to everyone who took part for a super afternoon of aromas, flavours and excellent dishes.

Stephanie, Jason, Jesse and Sarah have been invited to the Lincolnshire Life Cuisine Awards High Tea which is being held at The Lincoln Hotel in February along with the winners in the Awards’ other categories.