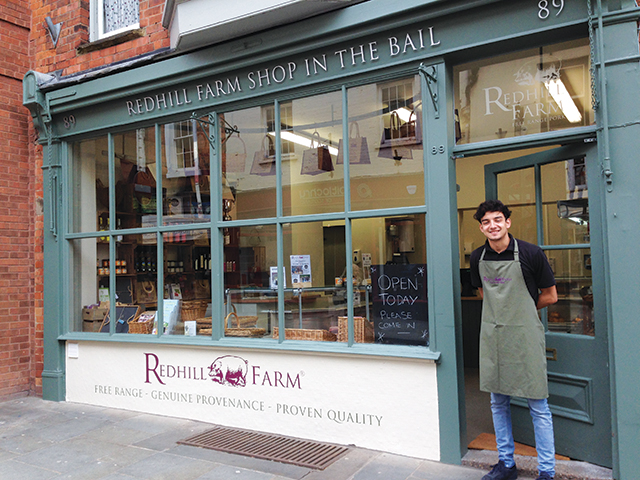 Producing and selling the best free range pork in the most ethical way they can is more than a business to farmers Jane and Terry Tomlinson – it’s a way of life, and now the couple are hoping to share their ethos with even more people after opening a city centre shop.
Attention to detail is everything to the Tomlinsons who are celebrating 25 years at Redhill Farm in Morton, near Gainsborough, this year. Their method of committing extra time, effort and skill to creating products of quality instead of making the process faster, easier and cheaper to the detriment of the end result has won them numerous national awards as well as prestigious customers including Jamie Oliver, James Martin, Wimbledon and Lord’s Cricket Ground.

Their latest venture – a new farm shop in Bailgate, Lincoln – is described by the family as a smaller version of the existing shop they run back on the farm and a perfect fit with the independent retailers already trading in this iconic city area.

Managed by their son George, it stocks their award-winning produce including free range pork, lamb, hogget, grass-fed beef and freshly collected free-range eggs supplied daily from the Tomlinsons’ farm as well as home cured, matured and smoked pork products. All the other produce is carefully selected from farmer producers whose products offer genuine provenance and authenticity in line with the Tomlinsons’ ideology.

They have completely renovated the property, which was previously a butcher’s shop, with new flooring, walls, cold storage, chiller cabinets and displays and are excited about welcoming customers old and new.

“We are delighted to be bringing Redhill Farm to Lincoln,” said Jane. “We’re looking forward to working alongside like-minded retailers who really care about what they are selling and to being part of the Bailgate community.

“We’ve been blown away by the overwhelmingly positive response to our new venture from other Bailgate shopkeepers and our customers.

“Our meat is free range and ethically farmed to the highest standards. We hand produce everything in our own butchery, bakery and smokehouse at the farm.

“We have cherry picked other suppliers who share our commitment to provenance and authenticity so customers can be confident that if we are not the farmer, then we will know exactly who is.”

The Tomlinsons have been farming at Redhill Farm since 1991 and started selling their own free range pork back in 1998 following the worst pig crisis ever witnessed by the UK. Jane said their young family – she and Terry had three small children at the time – was the driving force behind their decision to start selling their own produce.

“The whole situation just frightened me to death,” she recalls. “We went to this big national demonstration with people from all over the country and I remember thinking all these farmers should be on their farms.

“For me, faced with that amount of people, I just thought every livestock farmer in the UK would be selling their own pork and that I would just have to do it as best I could as I would have so much competition.

“If I didn’t have the children I would have just gone out and worked but we had to do it – we had nothing to lose.”

Initially the Tomlinsons were adamant they would concentrate on farming rather than turn their home into a commercial farm shop, while Jane threw herself into setting up the county’s network of Farmers’ Markets to showcase their produce and that of other farmers.

It was only after customers began turning up on their doorstep to buy their produce that they took the plunge and opened a small shop with limited opening hours on Tuesdays, Thursdays and Saturdays until 1pm. In 2014 the family commissioned a new state-of-the art building for production with a purpose built farm shop on the side.

The farm, which covers 180 acres, is home to 70 Duroc cross pigs who live in tranquillity with everything they need.

“What we do is a very expensive way of producing our produce, but we choose to do it that way because that gets the best results we can produce,” explains Jane.

“We do not impose anything on the pigs to step up their production – it takes as long as it takes – and we do nothing to make the process faster or cheaper.

“We make the best of what we have here, rather than try to make things artificially. The farm was pretty much derelict when we took it over.

“The land is poor, light and sandy, which is no good for arable crops, but it’s perfect for pigs who just want to root about. We grow our own food so we know what they are eating and we’ve been disease free forever.

“It’s been a very natural progression and because of that we’re very protective of our business and want to keep the quality. We weren’t looking for a new shop but this property in Bailgate became available, we liked the location and we’re very grateful we got it.

“We’re proud to have achieved national recognition for our pork, but selling our produce in person at farmers’ markets remains very important to us and we will continue to attend all our markets.

“The farm shops complement the farmers’ markets and we’re particularly excited that the Farm Shop in the Bail will offer tourists to Lincoln a taste of genuine Lincolnshire food culture. It will also allow us to support our increasing number of trade customers in Lincoln and the surrounding area.”

Redhill Farm Shop in the Bail is open 8.30am to 5.30pm, Tuesday to Friday, and 8.30am to 5pm on Saturday (closed Sunday and Monday) and will offer a light takeaway service alongside the butchery and deli. For more information visit www.redhillfarm.co.uk