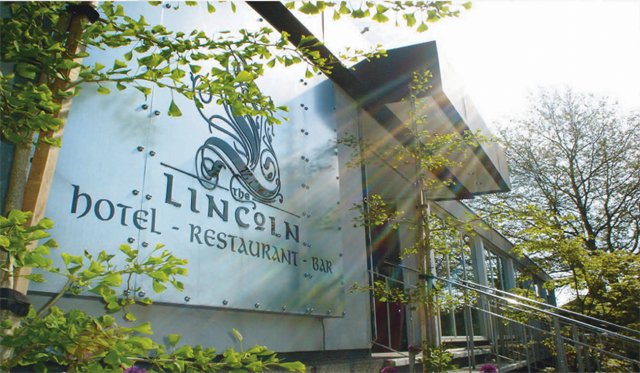 Price guide: Starters from: £4
Main courses from: £9
Desserts from: £5

Situated close to the Cathedral, The Green Room Restaurant boasts one of the best views in Lincoln. As anticipated the sight of the spires and turrets lit against the night sky didn’t disappoint and was a magnificent backdrop to our dining out.
Why the Green Room? Well the décor is the giveaway, but as well as the Farrow and Ball lovat tones there is artwork which pays homage to the county’s aviation connections and an intimate atmosphere, which is not always achieved in hotel restaurants.

The menu states proudly that the ingredients used are sourced carefully through local suppliers, using fresh and seasonal produce from all over Lincolnshire.

I began with a starter of pan fried breast of pigeon served with soused blackberries, watercress and jus while my companion chose a vegetarian option of marinated grilled halloumi with tricolore salad and a balsamic dressing. There was also a sweet potato and cinnamon soup, scallops with apple puree and chicken liver and fois gras parfait on the menu that evening. My pigeon was pink and tender and I really enjoyed the lightness of this winter salad. My companion is not a vegetarian and decided she would have perhaps enjoyed one of the other starters more, as she found the halloumi rather bland – but she did enjoy the accompanying salad very much. We had some very delicious, freshly made, mini brown loaves with the starters. There was a choice of plain salted or a tasty curry flavoured butter, which was a winner with me, to go with this bread.

For our main course there was a choice of eight dishes, including pan fried Gressingham duck breast, a pan fried corn fed chicken breast, apple and sage risotto, oven roast spiced salmon, Aberdeen Angus rib-eye steak, or a poached duck egg with goat’s cheese rosti. My companion opted for an Aberdeen Angus rump steak with wild mushroom duxelle, oven dried tomatoes and thick cut chips and I ordered a monkfish tail wrapped in Parma ham, with a basil and butterbean puree and a tomato and merguez sausage cassoulet. The cassoulet was presented in its own casserole pot, but I was initially surprised to see that the dish contained only red kidney beans rather than white beans, or a mixture. However, the flavour was deep, satisfying and complemented the meaty and delicious monkfish. My companion rated her steak to be one of the best she had tasted for a very long while and she thoroughly enjoyed the mushrooms and chips.

We did not order any wine to accompany our meal but there is a good selection starting from £15 per bottle, or fifteen of them can be ordered by the glass.

If you do not have a sweet tooth to satisfy, there is an impressive cheese selection. From a choice of six English artisan cheeses you can try two, four or all six with prices starting from £5 and going up to £10. The options included a Berkswell ewe’s cheese, Lincoln Blue and Little Imp cheddar.

We found the service both friendly and courteous, although I would rather that we were asked for our drinks orders prior to placing our order. The meal, however, from the quality of the produce to the complexity of the dishes and their delivery, was great value.

We rounded off our meal with coffee and a selection of homemade petit fours, which were very good indeed. The restaurant had been busy around us, with a mix of hotel guests and non-resident diners, and my visit made me want to come again to check out a couple of other dishes that had caught my eye. Beware scallops with apple puree and oven roast spiced salmon – I’ll be back.