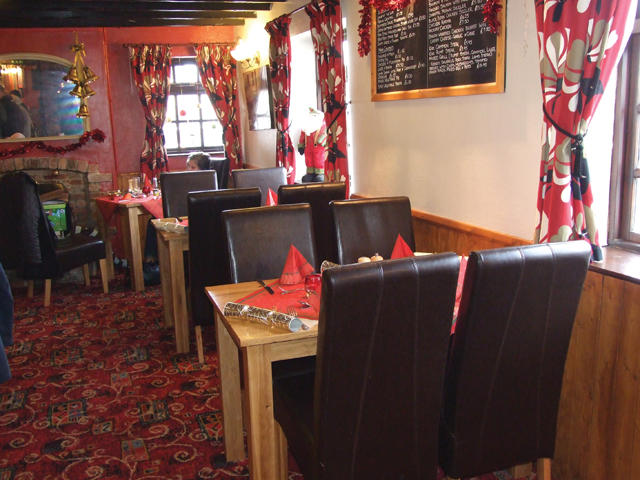 What a warm welcome we received as soon as we stepped into the main bar of the Royal Oak. Plenty of snow was still lying on the fields and ridges of ice on the roads so it was good to walk into this cosy pub on Sunday lunchtime. Emma Bilenky, the landlady met us and showed us around the pub which she and her friendly team have made a focus of village life.
There were some early diners already seated in front of the glowing stove and a couple at the bar so we took our seats and had a look through the menu while chatting to Emma. She is a Grimsby girl who graduated from Grimsby College in catering and management, then worked on behalf of other pub owners before taking the plunge in October 2009 to take on the Royal Oak herself. The interior has been redecorated, new lighting added and the bar, snug, pool and games room spruced up. Emma acknowledges that she could not have done it without the support of the enthusiastic and efficient team she employs. Emma does some of the cooking but mainly looks after front of house while the kitchen is the domain of chef, Pat Johnson-Ross.

Emma explained that she serves traditional plated pub meals, using fresh, locally sourced ingredients and at prices that will encourage customers to eat out two or three times a week. The pub has quite a small kitchen, so storage space is at a premium. Luckily her suppliers, John Pettit and Sons, butchers, Stallingbrough Farm Shop, EED’s and Oscar Cleve Fish Merchants will deliver so orders can be placed and come in ready for the next day’s serving.

Meals can be ordered as small, regular or large portions and my companion decided to try fresh haddock, hand cut chips and peas while I opted for roast lamb. The portions that came were definitely generous and I was relieved I hadn’t ordered the regular or large which I knew I would not have been able to finish. My lamb was served with Yorkshire pudding, mashed and roast potatoes, parsnips, carrots, broccoli, cabbage, swede and a side jug of delicious gravy. My companion’s fish was hanging over the edge of the plate, crisply battered served with soft and golden chunky, hand cut chips. Rather than have mushy peas as on the menu which my fellow diner does not like, garden peas were offered and accepted in their place. The haddock was exceptionally fresh, milky white and soft beneath the batter.

Other items we could have chosen included roast beef or gammon; steak, vegetable or chicken or mushroom pie. Everyone in the pub was being looked after very well, not only by Emma, but also by Pat who came out from the kitchen a couple of times to see how diners were enjoying their meals and by the waiting staff who were attentive and very friendly without being overly conspicuous.

All the desserts are home made too so how could I resist a choice of some proper traditional puds? Would it be treacle, jam, chocolate or sticky toffee sponge – but then again that would be ignoring the apple pie, rhubarb crumble, sherry trifle, Baileys explosion, banoffee pie or white chocolate cheesecake. In the end I went for the trifle and my companion the cheesecake. Very delicious and completely show stopping. This is very tasty, homemade, genuine food which is offered at very reasonable prices and served by people who enjoy their work and looking after their customers.

There is an evening menu which has a broad selection of British favourites as well as a couple of Oriental and Asian dishes. The daily lunchtime menu is an absolute bargain at £5 for any main course or snack item with a dessert and a tea or coffee for only another £1.

After we left, Emma and her team were due to welcome a party of twenty-four in the main bar but the snug can be used as a more intimate venue for parties of up to ten diners. Emma has had a busy fifteen months but there are more plans for the Royal Oak this year with a new bar and fittings being installed which she feels really will complete her rejuvenation of the pub.