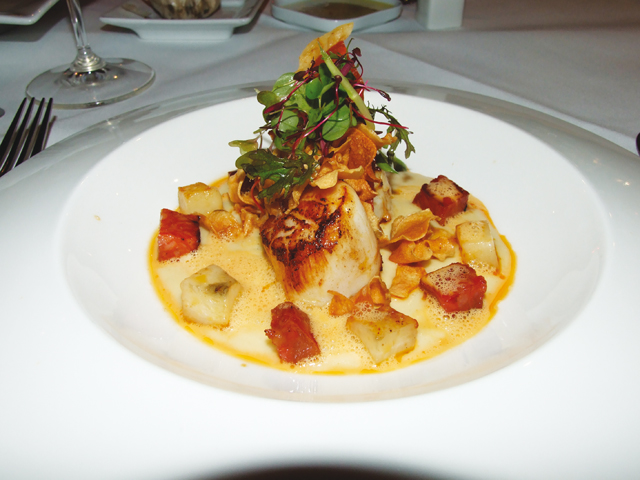 Caroline Bingham visited San Pietro, Scunthorpe and found a family run restaurant that is understatedly stylish and serving accomplished food with flair.
Scunthorpe may not be the first location to come to mind when looking for a fine dining experience but I can say at the start of this review that San Pietro is most certainly worth the trip.

We visited on a Friday evening and the car park was already busy. Located in a former mill, the interior has a contemporary decor which is warm and welcoming. We took a seat on one of the sofas in the bar area while we looked through the menu. The building has a Tardis effect in that the series of dining areas which wrap round the central mill tower cannot be anticipated from the outside. While the interior is spacious there is still an intimate feel and quality of table setting which makes you feel that sitting down to your meal at San Pietro is going to be a special occasion. Owned by Michelle and Piero Catalano, this is their eighth year in business and they have worked hard to establish the restaurant as a fine dining award winner, wedding and celebration venue.

The waitress offered us a choice from three premium gin brands for our G and T’s. I was surprised not to be offered a choice of lemon or lime but it was a very accomplished, refreshing Tanqueray based drink which arrived.

It is not often that I find it difficult to choose from a menu but for each course there were several dishes I could have opted for. It is not that the menus are so large (about seven choices on each menu) but they include tantalising and sophisticated dishes. There were also two special dishes that evening: a ham hock terrine starter and a seafood risotto main course.

We made our choices and were shown to our table. There was a selection of four freshly made breads, served with olive oil imported from the owner’s home village in Sicily, balsamic vinegar and roasted garlic. A delicate amuse-bouche of beetroot jelly topped with a horseradish foam was also served – quite a start to our meal.

My companion’s choice to start was goat’s cheese which was served as a millefeuille of roast beetroot with herb infused goats cheese cream, spiced orange dressing and slated caramel with hazelnut. I tucked into the hand-dived, pan fried king scallops on Jerusalem artichoke puree, roast artichoke and chorizo, proscuito crisp and chorizo foam. Neither of us could find any fault with these beautifully presented and mouthwatering starters. These were two outstanding dishes which I am sure any Michelin starred restaurant would have been proud to include on their menu.

For our main course I chose a game suet pudding which contained slow cooked venison, teal, rabbit and pigeon on spiced red cabbage with pan seared foie gras, girolle mushrooms and a chocolate infused venison jus. This dish very cleverly summed up autumn on a plate for me, with an intense depth of woodland and gaminess. My companion chose a duo of beef which included a pan roasted fillet and slow cooked blade served with wild mushroom and potato pave, a medley of local cauliflower, jewish relish and a rich port reduction. She marvelled at the succulence of the beef, perfectly cooked to her taste. There was a selection of side dishes but you would have to have a very healthy appetite indeed as the dishes themselves were generous in size.

As we relaxed and considered whether we could manage a dessert, a palette cleanser of berry mousse was served in a small glass. This was very creamy and fruity and could under other circumstances have been enough for dessert but we could not resist going for the third course.

The desserts which had been served to other tables looked spectacular. The ‘After Eight’ parfait seemed to be the top choice this evening but we chose lemon and ginger infused crème brûlée with prunes and Armagnac and a lemon and yoghurt sorbet for my companion and the toffee apple with layers of cinnamon shortbread with caramelised apples, Calvados, caramel sauce and liquorice ice cream. While we didn’t have wine there were helpful recommendations to accompany these desserts and San Pietro has a very knowledgeable sommelier who is on hand to help with wine choices.

The service we received was attentive and friendly without being overbearing and this is obviously a well trained and cheerful team, with Michelle leading from front of house and Piero and his team of four chefs in the kitchen. There is still an influence of Germain Schwab here as I recognised faces who trained and worked with he and Annie at Winteringham Fields.

We finished with coffee but had to pass on the chocolates which came with it as we were too full.

This was one of the best and most accomplished meals I have eaten this year. It is a fine line between creating fine food and building too intimidating an ambience around serving it but San Pietro pulls it off with friendly, efficient service and a venue that is firmly rooted in its local community. I will definitely be returning.