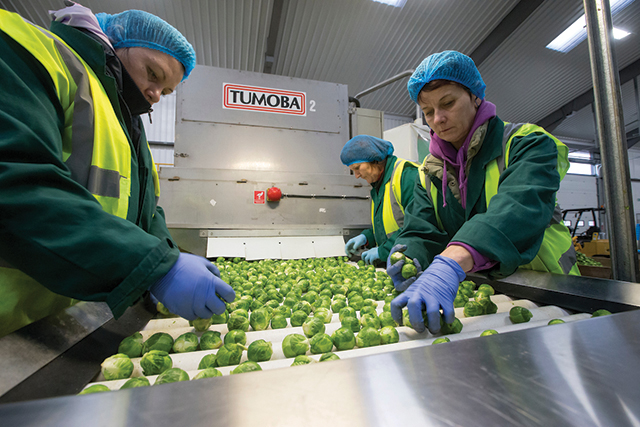 As Christmas fast approaches there is only one thing on the minds of the team at Lincolnshire Field Products – and that’s making sure their Brussels sprout harvest is successfully in on time.
Love them, or loathe them, Christmas wouldn’t be Christmas without sprouts and the Spalding based firm grows 551 acres of them right here in Lincolnshire.

That equates to around 4,000 tonnes – or nearly ten per cent of the nation’s whole crop – over the course of its eight-month season. It starts harvesting at the end of August, although a third of its massive crop is brought in just a few days before 25th December in order to meet the huge seasonal demand.

The farm primarily supplies High Street retailers plus wholesalers, the food service and freezing industries as well as exporting its veg to European countries including Italy, Spain, Poland and Holland.

“Lincolnshire has certainly had a good start to the season this year,” says Martin Tate, the farm’s commercial director.

“For the previous two years Lincolnshire sprouts have been very challenging, this is mainly because of the weather being less than ideal, and that coupled with the reduction in fungicides and herbicides meant we couldn’t control pest and disease in the way that we needed to in a difficult growing season.

“Last year, the main issue that made national headlines was the Diamondback moth destroying crops – but so far this year it’s looking good.”

There are more than 110 different varieties of sprouts, and Lincolnshire Field Products is growing approximately twenty this year, including Speedia, Bronte, Doric and Aurelius, to take it through the season. Each year new varieties are trialled and developed to improve taste and quality and the farm is growing five new ones this year.

“We start planting in early April and begin harvesting around the end of August,” explains Martin.

“Brussels are the only real seasonal vegetable we grow now – as they are not on the shelf fifty-two weeks a year – and that does give it more of a novelty value and encourages consumption when they are available.

“We have selected our varieties based on the years of experience we have, introducing new ones into the mix and getting rid of some of the older ones.

“I have spoken to a lot of people about sprouts over the years and there does seem to be this mindset, as people recall eating them during their childhood, remembering that they taste bitter.

“All the work and research that goes into sprouts now is geared to producing varieties that are about 25-35mm in diameter and much sweeter in flavour.”

Despite the resistance of those who only eat sprouts at Christmas, demand for the little green gems remains high. Martin says people are keen to eat more healthily and as sprouts are packed with high levels of Vitamin A and C, as well as folic acid and dietary fibre, they certainly tick plenty of boxes. Other studies have shown they can also help protect against colon and stomach cancer.

Sprouts are versatile too and can be stir fried, cooked with bacon lardons, or added to salads as well as enjoyed as part of a traditional Christmas lunch.

Lincolnshire Field Products grows its Brussels – and other crops including vegetables, maize, sugar beet, potatoes and cereals – across a land bank of 6,558 Ha.

And it’s this fertile land with its high value cropping opportunities, coupled with the climate, and the experience and knowledge of its workforce, which creates the quality produce it has become known for.

The farm, which this year grew 2,830 Ha of brassicas, is also one of the UK’s largest sugar beet growers, and holds numerous quality and technical accreditations including Red Tractor Assurance, Soil Association membership and the LEAF Marque.

Its sprouts are cultivated on land surrounding Spalding – as far north as Boston, Wisbech and Market Deeping to the south and the Wash in the east. Martin explains that the life-cycle of the sprout begins when the seed is propagated in the greenhouse six weeks prior to planting, a task which is carried out by hand.

Due to the research and breeding that goes into producing modern varieties, he says they require less chemical and herbicide treatments. However, agronomists and the field harvest manager keep a watchful eye on the plants for pests and disease as they continue to grow before harvesting begins at the end of August.

“Up until about three or four years ago a significant proportion of our sprouts were still harvested by hand, but now machinery does all of the picking,” says Martin.

“They are harvested first thing in the morning, but can be brought in twenty-four hours a day, which is something that does happen at Christmas.

“Harvesting starts at around 6.30am and the first sprouts are in the factory at around 8.30am, graded and packed and they will be into supermarkets either later that day or the following morning.

“They can be on the shelf less than twenty-four hours later and certainly when it gets to December this is happening as our harvest increases ten-fold at Christmas.

“It’s all geared around those five days from 18th December when things really start to ramp up; this is the most critical time for us as a business.

“The factory closes at 6pm on Christmas Eve, we have Christmas Day off and then it reopens at 6pm, Christmas Day night. We employ in the region of 500 people, but without these people we would struggle to do what we do.”

After picking and grading, the sprouts are then placed in packaging specifically designed to aid their respiration and maintain their freshness for up to five days and stored in cold stores until they are ready for the next stage of their journey, for which they will be transported by refrigerated lorries to the market place.

It’s then onto the shelves before they reach their final destination – to be enjoyed on Christmas dinner plates nationwide.

LINCOLNSHIRE CARROT PUDDING
Lincolnshire is famed for its vegetables – they’re bursting with vitamins and nutrients, full of flavour and also incredibly versatile.

So, if you’re looking to incorporate a few more into your festive feast why not try a Lincolnshire Carrot Pudding? The dish is described as a lighter alternative to a traditional Christmas pudding, while still retaining all the taste – and it’s simple to make too.

Method:
Mix the flour, soda and spice well together. Add all the other ingredients except the egg and mix well and thoroughly. Add the egg and bind well – if it is a little too stiff, add in a little milk as well.

Pour mixture into a large greased pudding basin, leaving space at the top as the mixture will expand during cooking.

Cover with a double layer of greaseproof paper and tie with string.