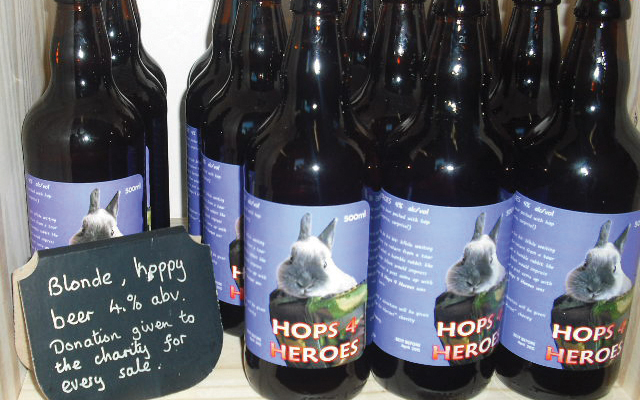 A taste of Lincolnshire’s heritage is being enjoyed by ale lovers up and down the country, thanks to one man who has launched his own microbrewery.
Tony Pygott, a primary school teacher by profession for more than thirty years, has realised a lifelong ambition by setting up the 8 Sail Brewery, on a prime spot in the grounds of Heckington’s historic windmill.

His range of traditional ales, including Merry Miller, Flour Power, 8 Sail Ale, Victorian Porter, Elderberry Porter and John Barely Corn, is already proving popular with punters and has led him to open a small shop in front of the derelict barn, which he converted for brewing back in 2010.

Plus he has more plans in the offing to create a small bar area, where visitors and customers can learn more about Lincolnshire’s brewing heritage and view associated memorabilia; something Mr Pygott is very keen to promote, as the move will tie in with the heritage aspect of the adjacent Grade I listed mill.

He says the decision to start the microbrewery came about as he had been looking for a change of career and had always been attracted to the idea of brewing; although at present he is still teaching part-time, with the intention of giving up once the brewery properly takes off.

Mr Pygott said: “I’d wanted to do something different from teaching for a while – I suppose you could say after thirty years it’s finally driven me to drink!

“I did a little bit of home-brewing quite a while ago, but it’s something that’s always been on the back burner. I’ve always had an interest in real ales and been a member of CAMRA (Campaign for Real Ale).

“I had enough money to set it up and decided to just go for it.”

After undertaking a basic brewing course in 2009 Mr Pygott secured a grant from Community Lincs to help transform a disused building, next door to the eight-sail windmill.

The equipment he installed and uses is a five-and-a-half barrel brew line, which means he can produce around twenty-two casks of beer in one go. The kit was installed in June 2010 and production began in September of that year.

The first ales he produced were a pale amber beer, which has been named 8 Sail Ale at 3.8 per cent proof, and a mid-brown easy session drinking beer called Merry Miller at four per cent.

Mr Pygott says the actual process he follows to brew his ale is very basic, adding: “The kit does the business very well; the brewing is very simple, although you have to get everything right every time to get the same results. A lot of it is to do with temperature control and the quality of the hops you use.”

The whole brewing process takes between six to eight hours. To start with, the grain is mashed with hot water to extract all of the natural sugars. It is then boiled with hops in large vessels called coppers before the final, critical fermentation stage, which takes around a week to complete. This involves the liquid being cooled before the yeast is added and the natural sugars are converted into alcohol.

Once fermentation is complete all that remains before the beer can leave the brewery is for it to be conditioned – put directly into the cask, barrel or bottle.

The hops Mr Pygott favours are mostly grown in Kent and Hereford; he tries to use English ingredients wherever possible as they are the best when it comes to recreating the traditional taste of Britain’s bygone ales and finds that Fuggles and Goldings varieties best suit his purposes.

Now that he has the brewing process under his belt Mr Pygott is working hard at the distribution side of things, but has so far found the business of getting his beers into local pubs a ‘cut-throat’ one, due to stiff competition and the restrictions on some breweries as to which ales they will sell. However, custom is gradually being built up and he is regularly supplying The Wheatsheaf, at Swineshead, and Kirton Leisure Centre.

On top of that, his beers often feature as ‘guest ales’ at other venues and they have been sold as far afield as Kent and Newcastle through wholesalers; plus he has a stall at farmers’ markets in Sleaford, Boston and Lincoln.

Beer festivals are also proving a good way of getting the brewery’s ales out to a wider audience and last year they featured at events in Grantham, Newark, Falmouth and Derby. Mr Pygott also hosted two very popular events himself in Heckington, to coincide with the Heckington Show and the windmill’s threshing weekend.

His next focus is to create the bar, which he says will feature Victorian, Edwardian and Georgian beer mugs and memorabilia and in turn make an educational display for visitors.

He said: “I’m very interested in creating and having on show beers that represent Britain’s brewing past. I want people to be able to learn about the heritage and history of brewing.

“We’re in a great location with the mill next door and there are opportunities to get the two working toegther – I also intend to create an ale which could be sold to help raise funds for the mill.

“The grain I currently use comes from Grantham and I have to have it crushed – when the mill is fully operational again that’s something it might be able to do for me. I’m hoping that it’s possible to buy my grain whole and have it ground at the mill next door. Both sites could be very compatible and it all links in with the heritage aspect.”

Mr Pygott has also brewed a charity beer – Hops for Heroes. A donation from the sale of every bottle goes towards helping our servicemen and women. Another special ale is planned to mark this year’s Diamond Jubilee, which he says will be a six per cent IPA (Indian Pale Ale).

He is also working on creating a reddy/coppery coloured ale, which will be aptly named Moulin Rouge, and has plans for more special events and mini beer festivals in the coming months.

* For more information about the 8 Sail Brewery, or to try Mr Pygott’s ales yourself, visit the brewery next door to Heckington Windmill, in Hale Road, which is currently open 12pm to 5pm, Thursday to Sunday. These times are subject to alteration in the summer season – to make sure it’s open you can call in advance on 01529 469308.