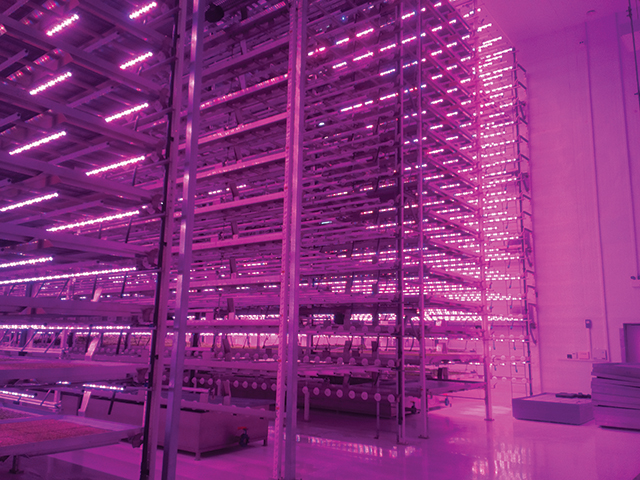 Shedding light on the future of farming

An anonymous former cold storage unit on a Scunthorpe industrial estate might not be the first place you would look for cutting-edge farming techniques but…
Jones Food Company has already made national and international headlines as the first indoor, vertical farm which will be commercially viable, growing up to 500 tonnes of herbs and other crops under perfect, light controlled, hydroponic conditions.

Directors James Lloyd-Jones (CEO), Dr Paul Challinor (CTO) and Gary Thorneycroft (CFO) bought the former cold storage warehouse in March 2018 after searching the country for a building which would offer the right location, level of security and freehold they required. It only took until November last year for the company to harvest their first income generating crop.

Gary explained that James had the idea to set up the company. Through Gary’s son, a rugby playing friend of James, they met and Paul is the scientist internationally known for his expertise in agronomy and crop production.

“It took us eighteen months to formulate the business plan, identify this location on Foxhills Industrial Estate and secure funds from the Enterprise Initiative Scheme. This is the largest, high care, vertical farm in the world with 5,120 sq m of growing space. We have installed five rows, each of which has 17 trays stacked to a height of 12 metres.”

The building was bought as an empty box and the investment has transformed the interior into a farm which uses no soil, rainwater or daylight but instead grows from seed placed on root encouraging matting, fed with nutrient rich water under three spectrum, red/blue/white ‘pink’ lighting.

Only six people work in the farm with most of the processes – seeding, watering and light phasing – running automatically. ‘Frank’ the robot will be the next innovation. Frank will operate within the growing area moving the heavy trays around the facility; a job currently achieved with a forklift.

Hydroponic techniques are already used extensively by tomato growers but this high care facility is immune to variations in weather conditions and can grow up to fifteen crops a year.

“We are producing herbs and leaves for food processors and sandwich makers. Crops such as basil, parsley and coriander are fast growing and a short height. On average crops take four to five weeks from seeding to harvesting. Fans create a constant breeze to encourage root and stem strength and the mature leaves have depth of flavour and colour without any tainting by pests, disease or soil.”

Jones Food Company are the largest customer of GE LED agricultural lighting at present and run the plant from solar panels. All workers and visitors undergo strict health screening prior to entry to the building. The washing area requires the donning of Wellington Boots, hair nets and overall body suits, and also includes an air jet cabinet to remove any dust or other particles from personnel. The seeding and harvesting area is bright white with hi-tech aluminium equipment handling impregnating seed trays, washing and sterilising these and harvesting machinery.

Another set of sealed chambers controls entry to the germination and growing racks. The ‘pink’ effect of the lighting means that it takes a moment for eyes to adjust but lush green crops can be seen in their various stages, incrementally growing taller as their racks are inched along.

“This is a hermetically sealed environment,” continued Gary, “with no pests and diseases where each batch of seeds is tested. This is why we have to be so meticulous about hygiene. Our products are intensively audited at every stage, so there is no need for end washing in chlorine. We can harvest the crop, which we do daily, and deliver direct to our client.”

Jones Food Company do not claim that all crops will be grown this way in the future, or that planting in open fields will cease, but the system is very scalable and can be used in inner cities or underground and has more wide ranging applications, such as growing medicinal/pharmaceutical plants or those used in cosmetics. The company would like in the future to identify other UK locations in which to invest and could develop a range of dried herbs to utilise any over production.

Gary added: “We have had interest from across the globe because this type of agronomy can reduce air miles and the cost of importing fresh produce. We have turned our crops’ day upside down – it is less expensive to run electricity at night than during the day – and to a degree this system turns traditional agronomy on its head. It will be an important technology though to the future of farming.”