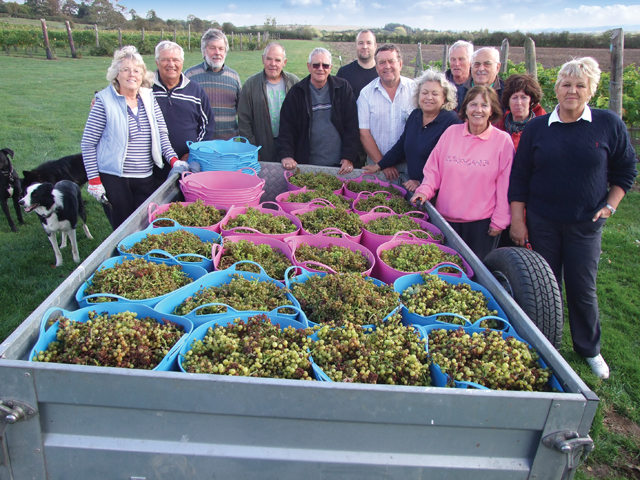 There are around 500 vineyards in England and Wales today producing wine but only two of them commercially in Lincolnshire. Caroline Bingham went to meet the people who are pioneering this industry in the county.
What a gloriously warm Friday afternoon it was last month when I went to meet Bill Hobson and David Lofthouse. We met at Bill and his wife, Linda’s, Somerby Vineyard, situated on south west facing slopes of the Wolds, close to the village. Bill ropes in family and friends when it comes to picking time and everyone stood around the result of their morning’s work. Baskets of quite small but very sweet and juicy white Solaris grapes sat in the trailer ready to be taken to Claxby, where David and his wife, Jennifer, operate their Three Sisters Vineyard; so called because they have three daughters.

David was a chemist by profession and has been making wine for over thirty-five years but it was only in 2001 when they bought their bungalow with its adjacent three and a half acre paddock that their vineyard dream could become a reality. The vineyard is sheltered from cold winds by the gentle south facing slope of the Wolds and the soil is light and free draining. “When I first made wine, years ago, I was using fruit such as rhubarb and elderberries but in the mid-Nineties I started to experiment, making wine from grapes,” David explained.

“I progressed from buying grapes from wholesale fruit suppliers to taking up the offer of some Italian wine grapes. After that it was only a small step to thinking, let’s grow our own.” Planting began in April 2002 and was completed in April 2003. David has 1,650 vines at present split between five varieties, three green and two black, which produce around 1,200 bottles of wine a year.

Bill’s own eureka moment came when he and Linda were on a driving holiday in Germany. They stayed in Rhinegarten and their hotel window overlooked a local vineyard. Bill was struck by how similar the landscape and area was to their own home in Somerby.

“When we got back I talked to our neighbours, Shaun and Victoria Merrick and they offered the use of an acre of land in their walled garden for our first vines. Planting began with our first 150 in 2006,” Bill told me.

Since then Somerby Vineyards has expanded rapidly and now has 9,000 vines split between seven different varieties, four green and three black.

I was asked if I would like to help pick or go along to Claxby to see the grapes being processed. Not a difficult decision, as I know how backbreaking picking can be. I made my excuses and followed Bill and David to Three Sisters Vineyard where, for the moment, the grapes from Somerby Vineyards are processed. They are tipped into a nifty machine housed in David’s winery which de-stalks the bunches and crushes the grapes to a pulp, known in the industry as mash.

David’s machine was a welcome early purchase. For the first harvest, his family sat around buckets using forks, de-stalking by hand!

As the mash from the Solaris grapes fell into the plastic drum below there was already a heady scent from the sticky juice. Once full, the weight of more than 200 kilos required a hand operated forklift to move the barrel and pallet they stand on. A lid was fitted and wine yeast would be added to the juice once the mash had been put through the press a couple of days later.

David and Bill have been co-operating in this way since Bill’s first season of harvesting. Now that more of Bill’s vines are maturing and his production has increased, construction of a purpose-built winery is already well underway next to the Somerby Vineyards.

When I visited, engineers were installing the services that will run the shiny, steel fermentation tanks already standing on the winery floor. A huge 2,000-litre tank plus six 1,000-litre tanks will increase Somerby’s output from this year’s 5,600 bottles to 20,000 by 2015.

Both David and Bill grow some varieties in common such as Regent and Pinot Noir, black grapes, which produces either pink or red wine, and Ortega a green grape which produces white wine.

Otherwise David has Reichensteiner and Siegerrebe, both green grape varieties. Bill’s other green varieties are Orion, Solaris and Phoenix and his other black is Rondo. They will eventually enable Somerby to produce a wide range of wines.

It takes twenty-five years for vines to mature fully, after which growers can expect another twenty-five years of good results and then fifty years of excellent production. “I may not be around to taste the very best wines from my vineyard,” said Bill, “but we have been delighted with the response to our wines so far and with the awards we have won.” Both David and Bill are members of the UK Vineyards Association and have won accolades from the Mercian Vineyards Association, including two medals and a best label award.

Three Sisters Vineyard welcomes visitors, by appointment, who can come for a tour and tasting or to buy bottles direct from the vineyard. Still available are dry white (including 2010 Reichensteiner and 2010 Siegerrebe), dry pink (2009 Regent) and dry red oaked (2010 Rondo) wines from £6.95 per bottle.

Somerby Monument dry white wine sells at £7.95 a bottle and is a perfect accompaniment to white fish with delicate flavours of citrus fruit and gooseberries.

There is also Somerby Ampula dry pink made from Regent grapes and an oaked red made from Rondo grapes.

I finished my visit back at Somerby Vineyards with a taste of chilled Monument dry white wine. This wine is young, fresh and a perfect aperitif and it seemed a shame I had to leave. I left the vanguard of this young industry in the county to ponder a good day’s harvest. They were thanking their weary volunteer pickers who, despite their aches and pains, would be back on Monday to help again!