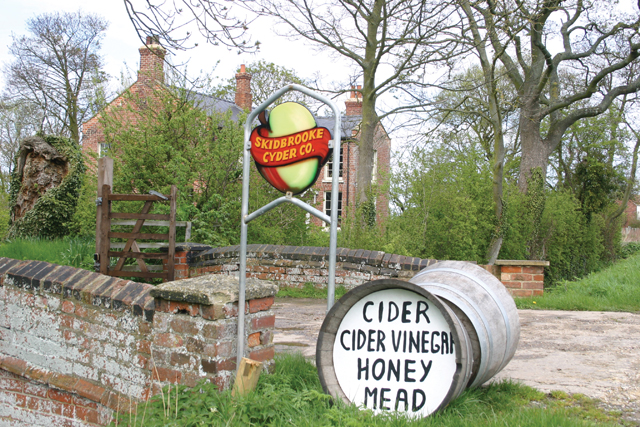 Today I met an artisan producer, a food hero who really is a true local produce champion. Guy Williams and his lovely wife Kate live on a farm in Skidbrooke by Saltfleetby, which lies seven miles east of the Capital of the Lincolnshire Wolds, Louth.
It couldn’t be more different out here near the coast, as the land flattens out quite considerably and allows the North Sea wind to blow across the fields.

The couple moved here over thirteen years ago. For Kate it was to return home to her Lincolnshire roots and for Guy, originally from Somerset, it was for a change of life that has now become a successful craft-cider business. Being from Somerset the cider making is surely in Guy’s blood and true enough, when they arrived at the farm, there were a small number of apple trees from which they made their own cider. At first it was purely for home consumption, but it was the thought that if they could do it for themselves, surely they could do it on a larger scale that got the ball rolling. Now they have over 800 trees producing 30,000 pints of pure apple cider and it doesn’t show any signs of slowing down any time soon either.

Guy and Kate produce what is commonly referred to as a Farmhouse Cider and are one of only a few producers in the county. The Farmhouse Cider is a pure apple cider made from apples only, with nothing added. The process is very simple: it starts at the harvest in the autumn, when the apples are pressed into a puree or a pomace, then folded into cheesecloth on racks, which is then pressed to release the juice. The juice is stored in large chrome vats where it ferments for six to nine months and is then transferred into oak barrels to mature. They currently produce two varieties of cider, the Dry, which is a full-flavoured typical farmhouse cider and the Vintage, which is matured for longer and has a sophisticated mellow flavour. Both ciders are non-carbonated, as is the traditional method for cider making. There are plans to produce a sweet cider this year as demands are high following the trend in sweet cider drinking. The couple also produce a Cider Vinegar in the same range.

One of the less obvious sides to the cider making process is that they also keep their own bees to pollinate the trees. This means that not only do they have a neat sideline in some of the best honey I have ever tasted but they are also one of the only producers of meade in the whole country! They also produce an incredible smelling beeswax polish which is available to buy direct from the farm.

This type of farmhouse cider production has its eco benefits too, as this is a totally cold process from start to finish. Since this is such a natural process the taste can change year on year, so it takes Guy’s keen eye to ensure quality is of the highest level. They also get ninety-nine per cent of their stock locally, much from their own orchard but they also take apples from anyone who wants to bring some along, with many locals bringing as little as a small bagful – in return for some lovely cider of course!

The farm is also host to a traditional cider festival to celebrate Twelfth Night, called Waes Hael. The Anglo-Saxon Waes Hael means to be healthy and wassailing apple trees was believed to encourage a good crop. The Grimsby Morris Men now come to the farm in all their colourful glory to offer a toast to Pomona, the goddess of apples. I am told it is an uplifting event in the deepest part of the winter and the invitation is open to all.

While all this sounds like the ultimate idyllic and bucolic existence, it’s actually far from the truth. It’s a hard slog for Guy who often works eleven hour days all year long tending to the crops, pressing the apples and of course looking after those bees which are currently having a pretty tough time getting out of the hives due to this dreadfully wet weather we’re experiencing.

It’s all clearly worth it though, and demand is high. Excitingly, as I was leaving the farm, the phone rang to confirm that Guy and Kate have secured a grant for a new press and pasturiser so they can begin to produce their own apple juice. If you’d like to purchase some of their wonderful produce the cider is available on their website www.skidbrookecyder.com or you can visit the farm itself to pick up the honey, meade or beeswax.