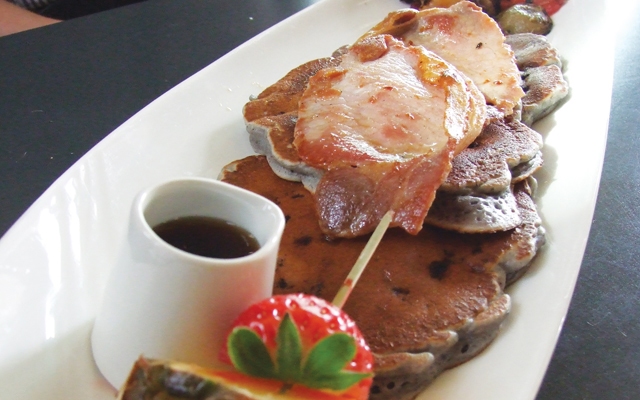 Stokes at The Collection Cafe, Lincoln

A weekend lie in is still one of life’s luxuries for me and a chance to catch up with the Sunday papers and just – chill. The last thing I then feel like doing is cooking, and yet there is still the hankering for a ‘proper’ breakfast.

Brunch fits the bill perfectly but it’s hard to find this option featured locally on menus. Stokes are award-winning fine tea and coffee merchants, as well as owners of Lincoln’s High Bridge Café. They recently launched a brunch menu available between 10am and 2pm at their most recent enterprise, The Collection Café on the city’s Danes Terrace. It was a sunny, spring morning when my daughter and I went along.

The café is located adjacent to the main entrance and in a bright, contemporary space with large picture windows and doors which open onto a terrace where you can sit outside – it was a little too fresh for us on this particular day but lovely when the temperatures lift. The long counter has plenty to tempt you as you walk in: the smell of freshly brewing coffee, cakes, bagels, crepes, waffles and pancakes made to order plus a display of fresh fruit and vegetables on the new juice bar. Newspapers and magazines were ready for you to grab before sinking into one of the sofas.

We sat at a table and began to look through the menu with managing director Nick Peel and general manager Jean-Sebastien Braen, whose upbringing in Montreal has influenced his choices for the menu.

We began with freshly prepared juices from the bar. I wanted mine to be vegetable based while my daughter opted for a fruit version. Nick made excellent recommendations of what would work well together. Mine was a combination of pear, celery, red pepper, carrot and cucumber. The pear juice added a soft body to the drink, which was semi sweet yet brilliantly refreshing. The fruit version contained grapes, orange, pineapple, apple and pear – delicious! For those in need of an extra pick-me-up there is a Hair of the Dog with an optional shot of vodka, a Mimosa, Bloody Mary or Caesar which I am sure would equally well stimulate an appetite.

If you insist on a full English breakfast, Jean-Sebastien has obliged with a twist, serving a crepe filled with bacon, sausage, tomato, mushroom, scrambled egg and cheddar. Looking through the menu there are lighter option such as bagels or waffles to begin and more complex dishes further along. My eyes went to a section titled The Benedicts. Not just classic Eggs Benedict but five versions on offer. I couldn’t have been more spoilt for choice. I settled upon The Swiss, where potato rosti was substituted for the toasted muffin and Swiss cheese replaced the ham. Served with seasonal garnish and fried potatoes, I thoroughly enjoyed my choice.

My daughter chose The American from The Pancakes section. Three fluffy American style blueberry pancakes were served with maple syrup and whipped cream. She tucked into them with great relish.

We also managed to share waffles with banana, butterscotch sauce and whipped cream – rightly called The Naughty on the menu – and also try a very Canadian treat, a Nanaimo bar which is similar to Millionaires’ Shortbread but made with either a custard or mint flavoured centre on a biscuit and coconut base in Jean-Sebastien’s recipe. The verdict was deeply sweet and morish. I also had a latte coffee while Jean-Sebastien encouraged me to try an alcohol free and refreshing Bloody Caesar, made with Clamato juice. Our brunch had not only spanned breakfast and lunch, it nearly ran into teatime too.

Throughout our visit, a steady stream of customers had been coming and going around us and Lincolnshire musician, Liam Robinson, played a live session of traditional tunes on his concertina which created a very continental atmosphere.

We left the café and wandered into the exhibition hall to view the Witham Shield, which is back in its home county on loan from the British Museum.

I think we have found the perfect recipe to begin your relaxed Sunday in Lincoln.