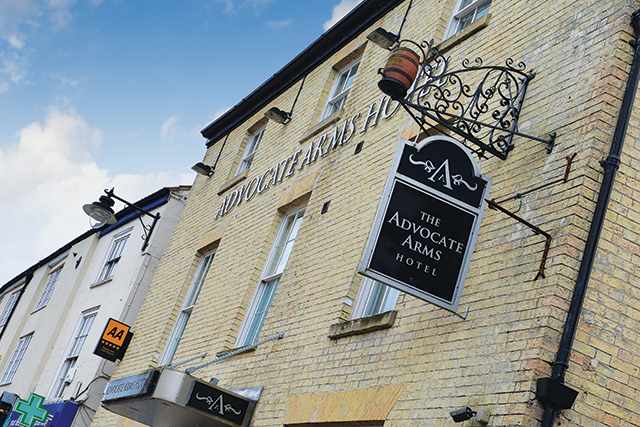 The Advocate Arms came out top in their category at Lincolnshire Life’s ‘Taste of Excellence’ Awards 2018. Caroline Bingham visited to see why their cuisine pipped others to the Best Restaurant post.
Market Rasen was decked in its Christmas finery on the Wednesday evening of our visit. The Advocate Arms hotel and restaurant is at the heart of the busy town with free parking either in the Market Place or in their own car park to the rear. The eighteenth-century hotel has been refurbished to high standards with a contemporary elegance. The atmosphere is warm (we received a beaming welcome from the staff); convivial (there were already plenty of early evening visitors at tables and booths in the bar); and popular (every table was occupied on our visit).

We took our chosen drinks from the very well stocked bar to our table and began to look through the menu. There were festive options, as you would expect in December, but we both chose away from that theme. The à la carte menu has six choices for each course and there was a separate steak menu. There certainly were tempting dishes. Soup began the starters, or chicken liver parfait or cured haddock risotto. The vegetarian option was mushroom, red onion and brie tartlet. We went for Advocate Scotch egg for my daughter and smoked salmon and prawn roulade for myself. While we waited a complimentary appetiser of smoked tomato risotto with venison salami was served. A tasty teaser for what was to follow.

Our starters were both well-presented and generous dishes. The egg yolk was runny and the homemade piccalilli a perfect contrast to the richness of the sausage coating. Served on carrot puree and chard, my daughter enjoyed this very much. My roulade was served with dill aioli, endive salad, Lilliput capers and parmesan croutes. Smoked salmon had not been used as the wrapping for the prawn filling as might be first expected but rather a baked roulade had been used. This was tasty, even of light lunch proportions and well executed.

The restaurant was fully occupied now with the table next to ours deep in horse racing discussions. No surprise considering the proximity of the racecourse and The Advocate Arms has become a favourite watering and accommodation stop for the racing fraternity. So, to our main courses. I chose baked cod served with goat’s cheese croquette, sweetcorn puree, corn and baby gem fricassee and scallion. This was a very delicious choice. My one suggestion would be to reduce the portion size of the corn fricassee. It is such as filling vegetable I could not finish it all but I know others would be capable of clearing their plate. Perfectly cooked fish and a delicious croquette made this a joy to eat.

The waiting staff had been very efficient and demonstrated their knowledge by answering our questions about the menu. I had another for them. Was it French or Italian meringue on the Raspberry Baked Alaska? This is one of my favourite nostalgic desserts so I could not resist this to end my meal. They confirmed it was Italian meringue, blow torched to caramelise the outer layer. My daughter chose chocolate brownie served with cinder toffee, chocolate soil and vanilla ice cream. She would have preferred her brownie warmed but as I pointed out this is something we should have requested. We both tucked in to the cinder toffee. My Baked Alaska was divine. Clouds of soft meringue encasing raspberry sorbet sat on a sponge base and served with a tangy mulled fruit compote. Neither of us could have eaten another mouthful.

The cuisine is certainly accomplished and I can see why so many customers and our readers nominated The Advocate Arms for the awards. Our judges found their style generous, welcoming, relaxed and delicious. I also think their food is very reasonably priced for the quality of the experience. As well as à la carte menus which are seasonally updated, there are private dining options, lunch, afternoon tea, Sunday lunch and breakfast choices. A seven-course tasting menu is another tempting option, maybe for the next visit, at £35 per person.