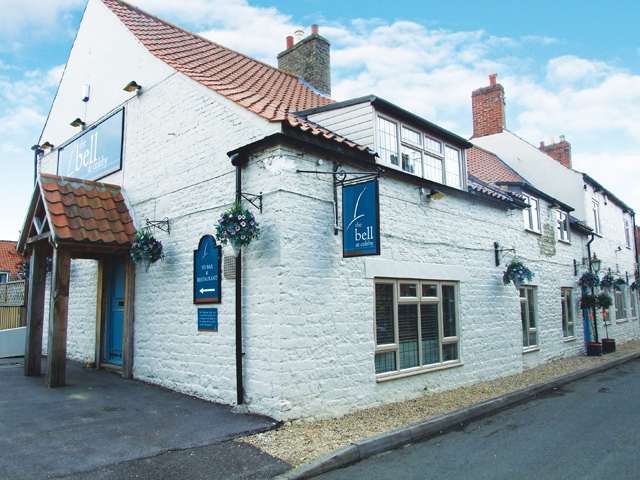 The Bell at Coleby

For a first time visitor to this charming country inn and restaurant, turn into Coleby, an award-winning Best Kept Village, from the A607 and head towards the church with its imposing tower and spire. The Bell is located in the lane which runs alongside and behind.
It is a picture book English pub, no thatch but plenty of beams and an open fire which is the focal point of the bar area. It’s a setting which will impress not just locals but will enchant any visitors too.

Paul Vidic, the head chef and owner is a well-known name in the county with an impressive track record stretching back over two decades, earned at the Brownlow Arms, Hough on the Hill and the Lincoln uphill gastro pub The Wig and Mitre.

We pulled into the car park at 7pm on a Saturday evening and already the car park was filling up with 4x4s and prestige marques. This is a chef and venue that the country set like and loyally return to.

The entrance at the rear of the pub has a well laid out deck and patio area which on a warm evening would be very inviting for drinking and dining al fresco, but the cosiness of the bar was far more appropriate on this night. Paul was welcoming diners, many by their first names, and offered us the option of loitering with a drink or going straight to our table.

I settled with a nicely chilled pinot grigio spritzer while my dining companion, Louise chose a glass of fruity sauvignon blanc. Our starters and main courses ordered, we didn’t have to wait long for my Cornish crab pâté served with cucumber and dill salad, lemon and Melba toast to arrive while Louise had opted for beer-battered tiger prawns with a green chilli, lime and coriander dressing. The pâté was soft and delicate but packed a zesty punch on the palate. I thoroughly enjoyed it. The prawns were deliciously meaty and perfectly cooked. There were eleven starters on the menu and other tempting dishes were baked cheese soufflé with ham, spinach and cream or crispy wontons with slow cooked Chinese duck and Hoisin dressing. Both our starters were quickly consumed.

The menu listed twelve main courses with an interesting mix of meats, game, fish and one vegetarian option. I almost chose the panache of scallop, lemon sole and salmon served with crushed peas, chips and tartare sauce but instead settled on pigeon breasts served pink on rosti potato and sweet and sour red cabbage. Louise chose the rump of lamb, served with parmesan mash, sun blushed tomatoes, spinach and pan jus. I love game and the pigeon breast was beautifully tender, delicately flavoured and generously portioned. The rosti was a good contrast of texture while the sweet and sour red cabbage provided moisture and a piquant partner for the game.

My only comment would be that the portion of red cabbage was too large and less would have been more on this occasion, but it’s just a small point on a good dish. The lamb was equally succulent with the parmesan mash declared an inspired accompaniment. Two empty plates returned to the kitchen.

We were seated in the raised restaurant area and fellow diners filled every other table. There was the buzz of chat as well as the clinking of glasses of drinkers in the ground level bar. A young but smoothly efficient front of house staff had been looking after us and they gave us the breathing space we needed after these two substantial courses.

Puddings are all home made and offer a roll call of classic desserts. For trenchermen with plenty of room for pud there is sticky toffee pudding with butterscotch sauce, or perhaps caramalised bread and butter pudding with vanilla custard. Lighter choices are crème brûlée or Bramley apple and rhubarb crumble. We chose warm double chocolate brownies, with marbled white chocolate ice cream and a classic tiramisu. Simply very good! Just when we were congratulating ourselves on our choices we finished the meal by sharing a selection of cheeses served with house chutney, grapes, toasted walnuts and biscuits. My favourites from the five were the Cornish Yarg and the Colston Bassett Stilton.

Paul had come back from the kitchen to talk to diners a couple of times during our meal and his satisfaction at seeing replete and happy diners was evident. There is a real skill to not only cooking food which people will want to return to eat time and again but also creating an almost dining club ambience for guests. I think this is Paul’s own secret recipe for success and he has mixed the ingredients perfectly, once again, at The Bell.