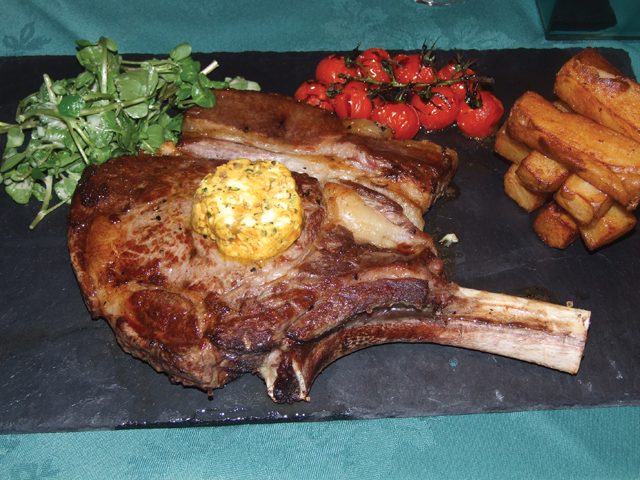 Burgh le Marsh is a small market town, only a few miles from the popular resort of Skegness, but when you are there you feel a world away.

The Bell Hotel is in the centre of the town and, walking in, it is easy to see that it is a hub for both locals and those coming from further afield. Whilst we were there several large parties arrived for dinner. The hotel is run by Andrea and Gareth Sleight, who only took ownership in March. In the short time they have been at the helm, they have introduced a new dining room – which can seat up to twenty-five people – redecorated the function room and added to the accommodation offering. They have also booked their first wedding for May, which they hope will be the first of many. With onsite accommodation, including rooms in the hotel and cottages at the rear, they have a wealth of facilities to offer.

When we arrived we made our way into the bar area, where we were greeted by Gareth who showed us to the dining room. The bar was bustling, and there was a jovial atmosphere, with families making the most of the bar menu. It was my guest Chloe’s first time accompanying me for a dining out review, and my only words of advice beforehand were to make sure she had a light lunch.

While we got settled in the dining room we were introduced to Gareth’s wife Andrea, who would look after us during our visit. As she took our drink order we were given time to peruse the menus. We had two dining options; the general menu, which offered classic pub food – including fish & chips, lasagne, and gammon & eggs plus many more – and a specials menu.

I decided to choose from the specials menu. The starter options included fresh oysters served with a salad dressing, or mussels with a pear cider sauce. As I am partial to mussels I had to give these a try. I was intrigued as to how the sauce would taste, as traditionally mussels are served in a white wine sauce. I was pleasantly surprised. The sauce was very creamy, and with every mussel you could taste the cider – which, as a pear cider fan, was great. The mussels were also cooked very well.

Chloe opted for the battered Brie wedge with a salad garnish. The batter was clearly homemade, light and crispy and the Brie, I am told, melted beautifully. The salad garnish that accompanied the Brie also stood out. Instead of a few lettuce leaves, the salad was made predominantly from rocket and had a wonderful dressing.

I decided to stick with the specials menu and chose the 14oz côte de boeuf served with Café de Paris butter, watercress, homemade chunky chips and roasted vine tomatoes. There was also a choice of game pie served with a red wine jus, or pork fillet
tenderloin in a honey and ginger cream sauce. When it arrived I had to do a double take; I don’t think I have ever seen such a large piece of meat before. Served on the bone, my steak was cooked to perfection.

It’s not very often I will try steak somewhere new, but I am so glad I did, and the butter it was served with melted slowly, so it added to the flavour throughout the whole meal. Unfortunately, I was defeated by the size of the steak, but if you had this to share between two it would be perfect. The chunky, freshly made chips were also cooked to perfection. While I was busy tucking into my meal, Chloe was savouring her choice of slow-cooked belly of pork, served with a black pudding mash and fresh vegetables. Again the portion size was very good, and just looking at it, it was easy to see the pork had been cooked exquisitely with a beautiful layer of crackling to top it off. As this is one of her favourite dishes, Chloe was more then pleased with it.

After we had finished – well almost finished, the steak did get the better of me in the end – we were given time to let our meals settle before we thought about dessert. The dining room has an ambiance of old school pub restaurant, which is actually quite charming. It felt relaxed, yet the food choices were definitely from the twenty-first century.

After a while we were told the dessert options. I opted for the Fruits of the Forest cheesecake. The biscuit base was comfortingly crunchy and the filling was light and well flavoured, with beautiful fruits including blueberries dotted through. Chloe went for another of her favourite dishes, apple crumble and custard. I am told the apples were deliciously tart and warming, and again the portion size was comforting.

After we had finished we chose to have a coffee and give ourselves some time before heading home. We both left feeling satisfied, although next time I think I may take advantage of their accommodation choices.

Whether you are looking for a bar snack, a sandwich or a main meal, The Bell Hotel has plenty to offer, and from what we sampled, I am sure you will not be disappointed.