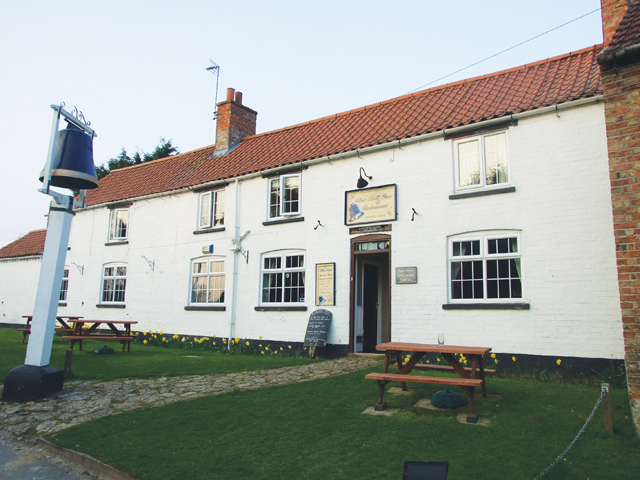 I was fortunate this month to pick one of the warmest days of the year so far to take a trip to the Wolds and visit The Blue Bell Inn in Belchford.
If I had to describe how we managed to find our way there, I would struggle, but I wasn’t alone in travelling through the heart of the countryside to visit the picturesque village, as both the bar and restaurant area were busy when we arrived.

We found a parking space round the back, and took a look at the stunning old coaching house. The inside has been tastefully decorated, keeping the original beams and fireplaces. We found our way to the bar, and were promptly taken to our seats with a cold drink in hand.

Whilst me and my guest Melissa perused the menu I took the opportunity to have a further look round the bar and restaurant. Behind the building outside is a peaceful lawned area with seating, perfect for summer evenings. The Viking Way runs through the middle of the village, so this would make a perfect stop to catch your breath.

After spending quite a while deciding on what to choose for starters, I opted for the haddock and cheddar fishcake on a confit tomato with a thermidor sauce whilst Melissa chose the chicken and leek terrine. My fishcake was absolutely stunning, with flaky fish, perfectly seasoned, and the sauce was a perfect accompaniment. The terrine was as smooth as mousse and packed a punch with flavours. The other options included soup, a kipper scotch egg, black pudding and Lincolnshire Poacher hash, and goats’ cheese, red onion and parmesan filo pastry cheesecake with Waldorf salad.

I was extremely excited and looking forward to our mains. I had chosen the belly pork in a BBQ sauce with corn on the cob and potato wedges from the Chef’s Specials menu. This has to be one of my favourite dishes and I was far from disappointed. The pork broke at the slightest touch of my fork and melted in the mouth. The corn and potato wedges made this feel like a proper Texan delight. Melissa chose ribeye steak, with a side of Stilton sauce. I’m not really keen on Stilton sauce, as it can be quite strong. However this was perfect; although it had the distinct taste of Stilton, it wasn’t over powering, and I could have happily munched on it all evening (even though it wasn’t mine!). The steak was also cooked to perfection, rare and tender.

There was plenty of choice when it came to the main courses, from pub classics including a homemade beef burger, fish and chips and ham, egg and chips to name a few. The Chef’s Specials menu also included salmon fillet, chicken hunter stew, lamb shank and Gressingham duck.

The vegetarian menu had choices including butternut squash, leek and potato pie, a Cheddar cheese soufflé and toad in the hole.

For those looking for something lighter, or perhaps a sandwich, there is plenty to whet your appetite. Sandwich fillings include bacon and brie, sausage and pickle, and ham and chutney to name a few. The light bites include a fish finger and tartare sauce sandwich, sirloin steak and Welsh rarebit.

Although we were feeling full, dining out is never complete without sampling the dessert menu. I fancied something indulgent and so opted for the chocolate torte, which was simply wonderful. Although chocolate torte can sometimes be slightly sickly, this wasn’t, and it was served with a raspberry coulis. Melissa chose the salted caramel cheesecake, which was light and fluffy. The Blue Bell Inn also serves a range of Dennetts ice creams and sorbets.

Although we had taken our time throughout the evening, I was still disappointed to leave and wish I could have sampled the whole menu. Darren, the owner and head chef, has worked wonders in the kitchen, and I shall certainly be making the trip again.