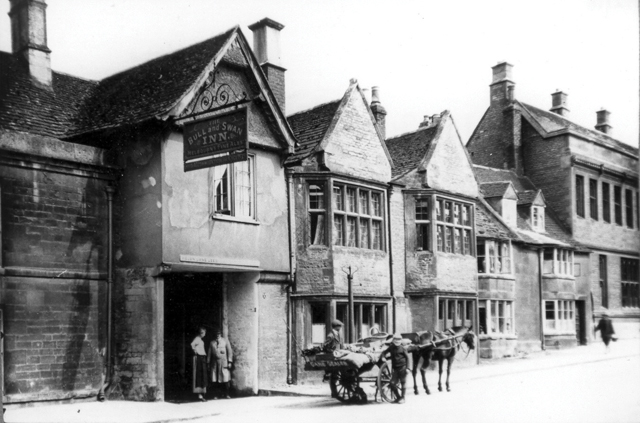 The Bull and Swan, St Martins

For over 250 years The Bull and Swan, no. 25 High Street, St Martins, has been a well known Stamford landmark. While the old stone walls and mullion windows may well remain familiar for another 250 years or more, inside is a different story.
Ever since the building was first converted to a travellers’ inn in the early seventeenth century the interior has been changed and evolved in keeping with the times and during the last three months The Bull and Swan has undergone its latest refurbishment. Now called the Bull and Swan at Burghley the old coaching inn, still the only public house in Stamford south of the river, has been taken back in time by its owners The Burghley House Preservation Trust and leased to Hillbrooke Hotels. In partnership with the company, whose tag line is ‘quirky luxury’ The Bull and Swan has been given an exciting twenty-first century facelift utilising the artisan Burghley Estate workforce of builders, carpenters, joiners and Collyweston slaters.

Visitors to the revamped Bull and Swan at Burghley can sit in the ‘Traditional’ bar or if the weather is fine the courtyard or take a seat in the Bedlam dining room – named after the eccentric fifth Earl of Exeter’s drinking club. The Honourable Order of Little Bedlam. The accommodation has been completely redesigned to provide seven good-sized, en-suite ‘individually’ decorated bedrooms. Each is named, not numbered; Ram, Greyhound, Lamb, Wild Horse, Badger, Stag and Lyon again inspired by the Earl’s drinking club whose eclectic members were named after the animals. The bar and restaurant – able to serve ninety-one covers at a time – will be open each day from 11.am to 11.00pm and the menu, lunch or supper, will remain the same throughout the day.

“The aim right from the start of the renovation has been to create a friendly and informal atmosphere throughout the bar, restaurant and hotel and to provide a welcome for everyone,” said Burghley Estate manager David Pennell. “The Bull and Swan has oodles of history which we hope to complement with the new furnishings combined with good, perfectly cooked British food and drink. We want the pub to continue to play an active part in the community – as it has for hundreds of years – and provide top quality beers, wines and food at affordable prices. The menus will include the best ingredients we can source. Using local suppliers is at the heart of the Bull and Swan’s ethos and the menu will change with the seasons,” said David Pennell.

From the beer to the meat, vegetables, bread and cheese the aim is to obtain and provide as much regional produce as possible. The real ale will travel less than ten miles, from the micro-brewery at the Burghley Estate-owned Exeter Arms in Barrowden; Burghley Estate tenant farmers will provide pork and lamb while venison and in-season game will come from the Burghley Estate. It will all be prepped and cooked by the team of talented chefs, headed by Phil Kent who was formerly the sous-chef at the Hillbrooke Hotels successful larger sister hotel, The Bath Arms at Longleat in Wiltshire.

The Bull and Swan at Burghley re-opens on 12th December. As well as daily lunches and suppers a Christmas menu is available and bookings are being taken for Christmas parties. For more information, menus, wine list and tariff visit www.thebullandswan.co.uk or call 01780 66412.

The Burghley House Preservation Trust has also taken back the management of The Bluebell at nearby Easton on the Hill. This popular village pub and restaurant has a menu influenced by the provenance of its tenants, Italians Alex and Cinzia Rambaldi. The pair has been behind the bar for the last five years and will retain the tenancy. As well as providing a good pint in the convivial atmosphere of the bar or a full three-course meal in the restaurant The Bluebell hosts many village events and parties such as last month’s ‘apple pressing day’. “Alex and Cinzia have done an exceptional job in moving this pub forward in keeping with customer demands and providing good beer and food in a friendly atmosphere making the pub a real community asset – it is so important to have a good pub at the centre of a village,” said David Pennell.

The Bluebell is open throughout the festive season for parties and Christmas Day lunch and tickets are selling for its New Year’s Eve party. For more information visit www.thebluebell.food.officelive.com or telephone 01780 763003.