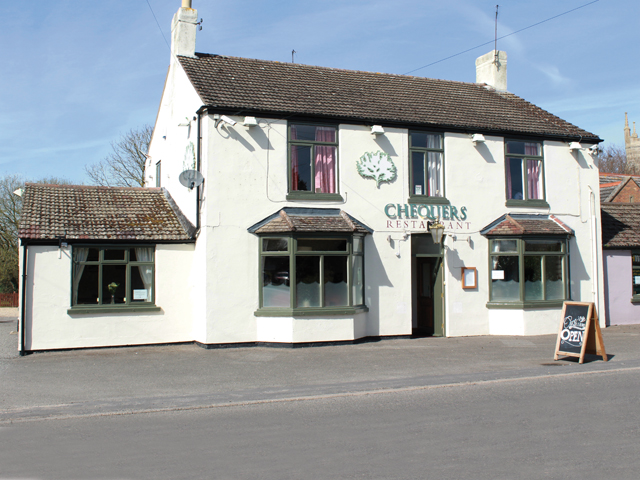 The Chequers at Weston

Under new ownership, The Chequers at Weston is undergoing something of a renaissance with its good honest food and relaxing atmosphere proving popular with customers.

Although it was one of the hottest days of the year when we travelled to Weston, near Spalding in the south of the county, it was certainly worth the trip.

The pub, which was bought by farmer Robert Oldershaw and his business partner John Grimwood last year, was completely refurbished in 2007 and is light and airy inside while holding onto its rural roots. Parking at the venue was plentiful, and as well as seating for fifty-five inside, there is space for almost as many again in its outdoor courtyard and beer garden – perfect for the warm summer nights we’re currently experiencing.

When it came to deciding what to eat, we were spoilt for choice. As well as the à la carte selection, The Chequers also runs a set menu, where diners can choose from two courses for £12.50 or three for £15.50, which can also be mixed and matched with the à la carte menu.

After much deliberation I chose the asparagus, black pudding and deep fried hen’s egg, which came highly recommended – and I wasn’t disappointed.

It was the perfect starter to enjoy on a summer’s evening. Both the asparagus, which I was told had been grown just down the road, and the hen’s egg were cooked to perfection.

My husband, James, opted for the beetroot cured trout, fennel and orange salad and brown shrimp muffin, the former of which was delightfully pink and packed a real flavoursome punch.

Choosing a main course also proved to be an agonising decision. I eventually went for the pan seared Scottish king scallops, chorizo and spring onion risotto, which melted in my mouth. It was absolutely delicious. The pan seared duck breast, roasted new potatoes with rosemary, baked fig and a confit duck roll tempted my husband – cooked to perfection it was incredibly tender and easily the best duck either of us have tasted.

The other mains on offer included a mix of traditional pub classics with a twist and speciality dishes, all made fresh on site with locally sourced produce wherever possible. They included beer battered haddock, hand cut chips, minted peas and tartare sauce; fillet of sea bass; and roast chicken breast, fine beans and peas, Dauphinoise potatoes and red wine sauce.

Although we were pretty comfortable by this stage, we couldn’t resist sampling the puddings. I must confess I have a sweet tooth and would have been happy with any of the desserts on offer. They included an extensive cheese board; sticky toffee pudding and vanilla ice cream; warm chocolate brownie and chocolate ice cream and glazed lemon tart and raspberry sorbet to name a few, but in the end it had to be the Chequers Eton Mess. Accompanied by fresh strawberries and raspberry ripple ice cream it was the quintessential summer treat with the crisp meringue contrasting perfectly with the softer fruit and ice cream.

My husband is a big fan of traditional puddings and was equally delighted with his baked egg custard tart and raspberry sorbet, which I managed to sneak a taste of. The filling was wonderfully creamy while the pastry was crisp.

Vegetarians are well catered for at The Chequers too; it offers a separate menu featuring dishes such as wild mushroom risotto, olive and herb gnocchi and tomato sauce and Lincolnshire vegetable Thai green curry, while a bar and garden menu is available for those looking for a lighter snack.

It features a range of salads, burgers and sandwiches while little diners are not forgotten either with a children’s menu boasting a 4oz sirloin steak, breaded chicken goujons, battered cod and hand cut chips and roast chicken mini fillet. And on Sundays a roast dinner is also available.

The Chequers aims to offer diners something a little different; as well as its delicious home-cooked fare, the bar is also set out to encourage people to try something new. During our visit the staff were incredibly friendly and their attention to detail second to none. Under the management of Robyn Howells and William Vernon The Chequers at Weston has been completely transformed, and I wouldn’t hesitate in recommending it to anyone.