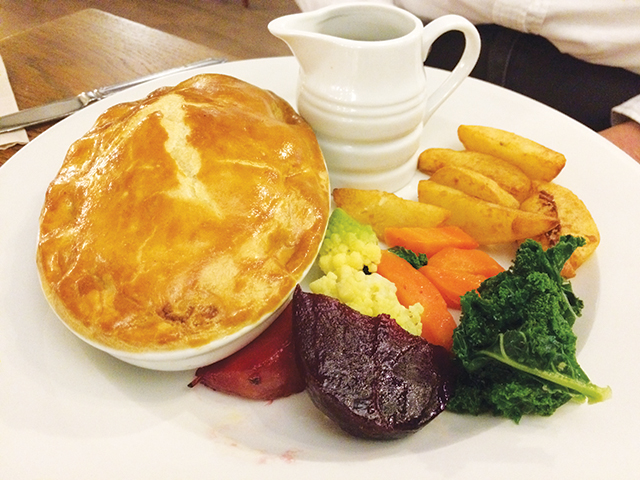 Caroline Bingham visited The Cross Keys at Stow to sample the menu of Lincolnshire Life’s Food & Drink Awards Chef of the Year 2016.
I have had the pleasure of eating Dan Wallis’s food before, when he was employed at Washingbrough Hall and of course when I judged the three courses he produced for the final of our Chef of the Year competition last October. Not that I knew it was his food at the time – the dishes are served anonymously.

2016 was a landmark year for Dan and his wife Hayley all round as, with backing and support from their family, they took over the Cross Keys Country Inn and Restaurant in Stow. Our visit was a well timed chance to see how they have bedded in there as they come up to their first anniversary of running the business this May.

The Cross Keys is easily located on the main route through the village and has plenty of car parking alongside. The bar is centrally located with a versatile group of three adjoining spacious rooms. In the room to the right, a local am-dram group were holding a get together and read through for their next production, in what is also an ideal private dining space. We were seated in the main dining area, with its welcoming log burner and through to the left is a room furnished with comfortable sofas and low tables; ideal for enjoying pre-dinner drinks or coffee. The rooms are fresh and decorated in a country style soft green with wooden flooring throughout.

There were three of us in our party and Hayley explained that we could choose from the Dinner or Classics menus that evening. All the options were also on the blackboards above the fireplace. Both menus offer a choice of four starter and five main courses but it’s fine to mix and match.

I stuck with the Dinner Menu and chose to start with Twice Baked Cheese Soufflé with smoked haddock velouté to be followed, for a main course, by Fillets of Sea Bass served with confit of heritage tomatoes, beetroot sauce vierge and soft boiled quail’s egg.

My daughter, opted for the Classics menu with twice baked cheese soufflé served with caramalised red onion marmalade to begin and beer battered haddock with hand cut chips and mushy peas to follow. Our third diner chose a mix and match of soup of the day from the Dinner menu (fennel, apple and cauliflower served with delicious homemade bread) followed by steak and mushroom pie served with chips and seasonal vegetables from the Classics menu.

The soufflés were excellent, as was the soup. All of us commented on the wonderful flavour of the bread which is made by Dan and his two fellow chefs.

The pie and filling were declared first class, as was the quality of the fresh fish.

I thoroughly enjoyed all my courses, especially the Sea Bass; beautifully cooked fillets with delicious earthiness of the vegetables and a perfectly runny egg yolk; light but deeply satisfying at the same time.

We had a breather between courses and I had chance to reflect on how Dan has finely balanced the food offer in this country pub location of familiar British classics, adding his own twists to some and featuring more internationally inspired dishes in the evenings.

Yes, there are steaks, fish and chips, pan fried liver and bacon to name but three but these are in contrast to pan seared oriental duck breast served with sweet potato puree and toasted sesame or chicken supreme served with carrot ketchup, smoked Lincolnshire Poacher Dauphinoise and Madeira velouté. I’m sure you get the idea. It’s a delicate balance but Dan and Hayley seem to be pleasing many of the people much of the time judging by the number of diners around us.

We did indulge in desserts. My daughter chose sticky toffee pudding, our guest went for crème brûlée and I was the one who could not resist the chocolate, an assiette of three miniature desserts, chocolate mousse served with boozy raisons, white chocolate and orange parfait and warm chocolate brownie served with pistachio ice cream. Showstopping!

I think what also impressed me about the evening was the turnout of the staff and their friendly, efficient service. Their enthusiasm is infectious from Dan and Hayley and it is wonderful to see a team so committed to the hospitality they serve.

Unpretentious, relaxed, welcoming and thoroughly good food, it will be interesting to see how far Dan and his team can push his skills and the boundaries of the menus in the future at the Cross Keys.

If you are looking for a lighter option for lunch or early evening the Special menu is served between 12noon and 2pm Tue to Sat and 6pm and 7pm Tue to Thu, with one course for £9.95, two courses £13.50 and three courses £16.50.

The Sunday Lunch menu offers a choice of four starters and at least two roasts plus four other main options. Bookings for Mother’s Day, 26th March, are now being taken. A special menu for the day will include four starters, five main courses and four desserts with temptations including a prawn, crevette and crayfish salad, slow braised beef served with horseradish creamed potatoes and a Black Forest meringue roulade. Prices are £24.95 per head and £15.95 children under 10 years of age.