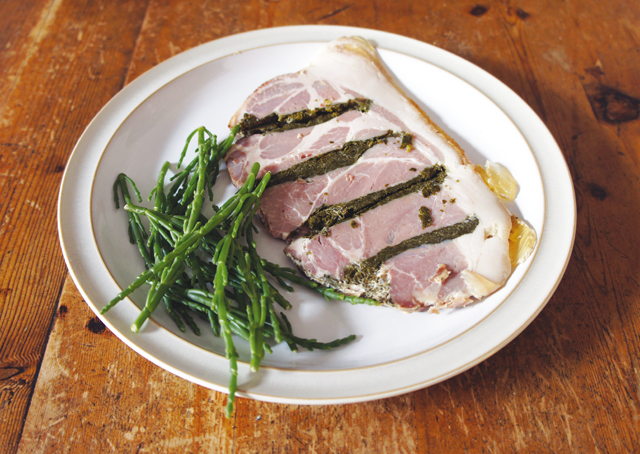 The delicacy of the marsh

Samphire is a seasonal treat which now appears on the finest menus.
On Thursday, 4th June 1857, a property auction took place at The Chequers Inn, Holbeach. Up for sale was a freehold estate comprising not only ‘most capital land with buildings and homesteads’, but also ‘1440 acres of high samphire marsh and sands’.

The fact that the presence of samphire was noted in the auction catalogue is a testament to its historical association with Lincolnshire folk. Still today you can see samphire beds marked on Ordnance Survey maps of the county’s coastal regions, just as you could back in 1906.

But what exactly is samphire? The question is more complicated than it sounds. Despite being frequently referred to as a form of seaweed, it is actually a vibrant green plant, but unfortunately the confusion doesn’t end there.

Two plants which go by the name are eaten in Britain: rock samphire and marsh samphire. Although they are different species, many writers neglect to make any distinction between them, or to specify which they are talking about (if, indeed, they know).

The garbled information which results from this imprecision is to some extent excusable, at least in as much as the muddle is an extremely old one and not confined to the British Isles. The word ‘samphire’ is a bastardization of ‘Saint Pierre’, the French name for Saint Peter, the patron of fishermen, and the folk who christened both species in his honour also seem to have confounded the two.
The ‘samfer’ or ‘sarn pere’ of Lincolnshire is marsh samphire. Until the nineteenth century it was burnt to make an ash that was used in the manufacture of glass, and for this reason it is also known as glasswort. It can be found in a variety of coastal locations, but mudflats in particular provide a favourable environment.

Foraging is all the rage at present, with TV chefs falling over themselves to extol the glory of wild ingredients, but really they are only waking up to the existence of foodstuffs that country dwellers have appreciated for generations.

These last remaining truly seasonal harvests stand in stark contrast to the year-round availability of the same tired produce on the supermarket shelves. Keenly anticipated by young and old alike, samphire gathering has traditionally been a family affair, providing a continuing link with place and past.

“My grandfather would go out collecting it,” a young girl told me, her face lighting up at the memory. “He always used to say that here in Lincolnshire we have the dunes to provide us with rabbits, and the marshes to give us samphire.”

Wildlife and plant expert June Barton, who takes people on guided walks around her local salt marshes, is similarly enthusiastic:

“I was born in a farmhouse overlooking Kirton Marsh, and I first went on a samphire gathering trip at the age of six weeks. Every family around the salt marsh used to harvest it and my brother and I still do every year.”

Samphire benefits from being washed by tides, and June’s advice is to make sure that one has lapped over it on the day that it is collected. In the words of a wise old Lincolnshire saying, ‘The nearer the sea, the healthier ’twill be.’

“When gathering samphire,” said June, “you should on no account pull it up by the roots. Cut the shoots with scissors or a knife. Leave the roots in place to protect the soil and to let it grow again.”

According to one tradition, samphire should be harvested during Lammastide week, at the very beginning of August. Another, however, warns that you should ‘Pick your samphire without delay, tomorrow is the longest day’ (21st June). In actual fact, the date at which samphire is ready for eating will vary from year to year, depending on the weather.

“Because it was a terrible cold winter I expect 2013’s crop to have germinated late,” said June.

When in his play ‘King Lear’ Shakespeare describes samphire gathering as a ‘dreadful trade’, it is to rock samphire that he is referring, the getting of which involved braving the sides of cliffs, but perils such as quicksand can make collecting marsh samphire dangerous too.

“Kirton Marsh was my garden and my playground when I was a child. Make sure you go out with somebody who knows what they are doing,” warned June.

You should also check to see whether there are any environmental restrictions in place covering the particular area in which you intend to gather.

Wash your samphire well. Six changes of water are recommended, after which it will still be salty, but a high sodium content is one of the plant’s characteristics. It is, however, low in calories and saturated fat, and a good provider of minerals and vitamins, most notably vitamin C. In olden times sailors used pickled samphire as a means of preventing scurvy during long ocean voyages. And if its reputation for relieving flatulence has any truth to it, that doubtless made life on board more pleasant too.

Even though pickled samphire is no longer needed to help Lincolnshire folk survive the winter months, pickling still remains a popular way of preparing it. Many aficionados, though, especially value the plant either raw when very young, or steamed for just long enough to allow you to scrape the flesh away from the inner stalk with your teeth. Be careful not to overcook it – three to ten minutes should be enough.

In Lincolnshire, cooked samphire is traditionally covered in vinegar before being served with stuffed chine, cold boiled bacon, ham, bread or toast. Contemporary tastes, which find the vinegar treatment too harsh, tend to prefer it with just a twist of pepper and some melted butter.

The latter method of presenting samphire, along with its passing resemblance to sprue, is probably why it has sometimes been called ‘the poor man’s asparagus’.

Sadly, such a nomenclature is well out of date. Samphire is no longer a freebie handed out by the fishmonger to his most valued clients. Marsh samphire was served at the wedding reception of Charles and Diana in 1981, and its current ubiquitous presence at the poshest of restaurant tables makes it more appropriate to dub asparagus ‘the poor man’s samphire’.

Top chefs, like centuries of Lincolnshire folk before them, love the fresh, salty crunch that samphire adds to fish dishes and seafood. Salmon and samphire has long been a marriage made in heaven, but the plant can be found featuring alongside varieties such as bass and monkfish too. Those who enjoy it with cockles and a squeeze of lemon will be unsurprised that in classy establishments samphire rubs shoulders with scallops, crab and razor clams.

Samphire is also now being included in recipes that originate from beyond our shores, popping up in risottos, with pasta, and even on bruschetta. In Britain, its ability to give a zing to blander ingredients leads to samphire being combined with potatoes to make a basis for soups and broths.

Despite these innovations, the seemingly outlandish modern pairing of samphire with lamb is, however, nothing new. In ‘The Accomplisht Cook’, written in 1660, Robert May gives a recipe for loin of mutton steaks with wine, onions, herbs and spices, to which capers, gherkins and samphire are optional additions.

People have always known a good thing when they see one!