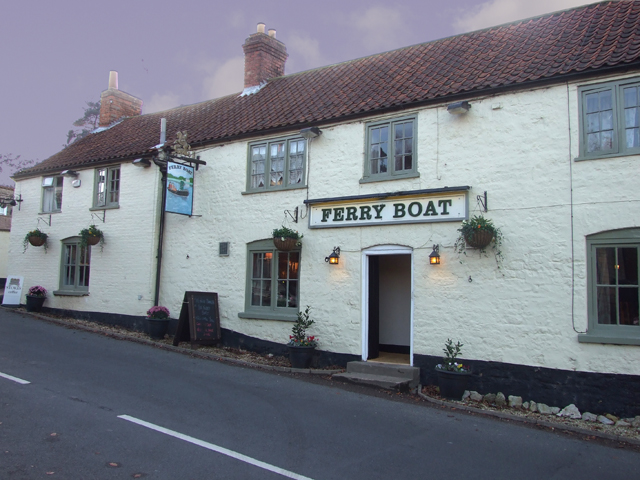 The Ferry Boat has been in Washingborough since 1625. At that time, the River Witham ran alongside the pub and the landlord ran a ferry service for those wishing to cross the water.
Much has changed since then but the pub has remained a part of the village. New owners Richie Bell and his wife Nichola have taken on the arduous task of making the pub once again a focal point for the village. Since they received the keys in early October they have spent a great deal of time and energy bringing the building back to life. New floors and decoration, a new bar and kitchen, and a new team, they have done a great job in a short amount of time.

Richie and Nichola are no strangers to the catering trade either. They already own Bells’ Tea and Coffee House in Lincoln’s Bailgate.

From the outside it is clear to see that much has been done, and a new coat of paint has lifted the premises. A neutral colour scheme adds to the traditional building. When you walk in, it is pleasantly surprising. The bar and decoration have a modern feel, despite the traditional style. Indian oak tables, floral patterns and leather all add to the final look.

We were welcomed by one of the team when we arrived and were promptly shown to our table, where a drinks order was taken and we were handed the menu for the day. The Ferry Boat has two menus: a Sunday lunch menu – with a choice of three starters, four mains and three desserts – and a main menu, which has some more options, but the couple have gone for quality over quantity.

For my starter I chose the moules marinière. Mussels are probably one of my favourite choices when I dine out, or in, so there was no other option for me. Served on a wooden board, a huge bowl of mussels was presented with some sliced white loaf. The flavour of the sauce was divine. Often you experience a tangy aftertaste; with these there was none. The mussels themselves were a good size, something you don’t often find, and very fresh.

Accompanying me was the magazine’s new sales manager, Amanda, so she could see what was on offer for our reviews. She chose the homemade pâté which was served with sliced loaf and a rocket salad with a balsamic dressing. In her words, she had never enjoyed such a nice pâté before. The other option was a carrot soup. However, the main menu includes Thai fishcakes, pears with new potatoes, Stilton and walnuts, or ‘old style’ potted beef.

Our main courses were just as nice. I opted for the roast pork which was served with the veg of day including red cabbage, broccoli and cauliflower cheese, roast potatoes and baby carrots. It also came with a Yorkshire pudding, apple sauce and gravy. The pork had been sliced into two thick pieces and served on a warm plate. So often, eateries serve their meals directly on cold plates, which ruins the overall result, but nothing was going to ruin this meal.

Amanda chose the fillet of salmon, which was also served with vegetables and potatoes. Salmon is easy to overcook, but this was done beautifully, flaking when the fork was pressed against it. The other main courses for Sunday lunch were roast beef, or a fennel and potato gratin. The main menu offers roast duck with redcurrant sauce; belly pork confit in a cider sauce; cod; steak and twice cooked chips; mussels in a cider sauce and lentils with wild mushrooms and leeks.

Even though we were both pleasantly full, we couldn’t resist the dessert menu. Amanda chose the homemade apple crumble whereas I opted for the chocolate brownie. For any chocolate lover the brownie is an absolute must. Gooey, warm and served with vanilla ice cream, it is quite possibly one of the best desserts I have ever chosen.

Amanda also enjoyed her dessert which was served warm with vanilla ice cream. Had Nichola not convinced me to try the brownie I would have chosen the lemon posset, but I am glad she did. The desserts on the main menu are the same.

We finished our meal with a cup of coffee, which again is local, using Stokes products. Careful attention is paid even to the little things, like the milk, which was served in a mini milk bottle. There isn’t anything this couple haven’t thought about.

In less than six weeks the couple have completely transformed the restaurant into a destination pub. They held their first music evening the day before we went and said it went down so well that they have already booked the same act for a further two evenings in December.

As well as serving the main menus, they also offer afternoon tea which, as anybody who has visited their tea shop would expect, is wonderful.