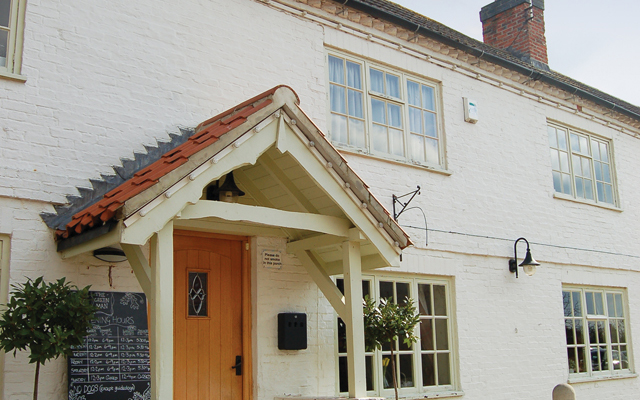 A well-known couple in the hospitality industry, Becky Pinfold and Matt Kerekes, have already proved their skills front of house and in the kitchen elsewhere in the county but recently they have taken on their own tenancy at The Green Man, Norton Disney.
The pub closed just before Christmas, so it is reassuring to see, after a refurbishment of the interior, its rejuvenation as a Real Ale Pub and Restaurant, with a stylish country ambiance and a very capable team in charge.

The Green Man sits in a prominent location on the main road in the centre of the village, with ample car parking. We visited a week after the opening and the take up of spaces gave some indication of the numbers of customers Becky and Matt are already attracting.

The interior has been opened up to give an L-shaped public space where there is an easy fluid movement between the bar and dining areas. The décor is vintage painted table and chairs, coir flooring and tartan soft furnishings; the effect is relaxed country house.

We did not stay long in the bar but there were plenty of people enjoying a Friday night pint as well as those who had come to eat.

We ordered from the Evening Menu and I have to confess we were both in the mood for fish, so apologies that neither of us opted for a meat or vegetarian dish. I began with Chipotle and Lime Grilled Tiger Prawns served with a cucumber and spring onion salad while my daughter chose Smoked Salmon and New Potato Salad served with caper berries and a lemon wedge. Other choices included Oxtail Fritters with blue cheeses and celeriac remoulade; Bombay Scotch Egg, Tempura Squid, Goat Cheese Waldorf Salad and Tuscan style Beans on Toast served with Parma Ham.

My meaty prawns were spicy and succulent and perfectly matched with the bite and tang of the cucumber and onion. The smoked salmon was delicious and my daughter especially liked her potato salad which was creamy and flavoured with herbs.

These had been generous portions so we knew we would have to pace ourselves for the following courses. Next, I went for the Poached Smoked Haddock served with mashed potato, spinach, poached egg and a wholegrain mustard sauce while my sidekick chose Beer Battered Haddock with chips, mushy peas and tartare sauce from the Pub Classics section of the menu.

My choice is one of my favourite combinations but it can be made or broken by the sauce. I loved this wholegrain mustard version. Rich and creamy, it worked so well with the smokiness of the fish and the battered haddock was declared a success too. If you take both main menus there are fourteen choices (plus daily specials) so too many to list but there is an 8oz Ribeye Steak for meat lovers, Slow Cooked Pork Shank, Salmon and Prawn Laksa as well as a Green Man Burger or a Pie of the Day; a clever menu which has choices for a family supper or a more formal occasion.

We definitely took a breather now and it gave me time to tune into the background jazz which was playing through the Sonos system. Relaxed and not intrusively loud, and there were plenty of lively conversations going on at nearby tables.

For dessert I chose two scoops of homemade ices; a Pistachio ice cream and Mango and Passion Fruit Sorbet. Light and bursting with flavour, they rounded off my meal perfectly. I did manage to sample a spoonful of my daughter’s Sticky Toffee Pudding, served with vanilla ice cream, butterscotch sauce and crushed walnuts; a great version of this classic pudding.

The hospitality industry can be a hard taskmaster but as proprietor chef and proprietor manager, Matt and Becky have already made an impressive start in their new venture.