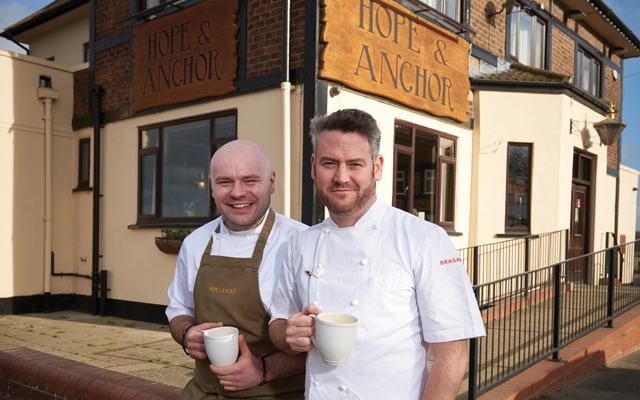 The Hope and Anchor, South Ferriby

Caroline Bingham visits The Hope and Anchor, South Ferriby
Many readers will be familiar with Colin McGurran’s name from his appearances as one of the final banquet winning chefs on Great British Menu or as a guest chef on Saturday Kitchen. His restaurant with rooms, Winteringham Fields, also on the south bank, has won accolades from food critics and customers who return time and again to enjoy an internationally rated fine dining experience using glorious fresh local produce.

Colin and his wife Bex’s most recent venture opened nearly a year ago. The Hope and Anchor pub at South Ferriby was flooded during the tidal surge of winter 2013. It remained closed for eighteen months, falling into considerable disrepair and distress before Colin and Bex purchased the property. The ground floor of the nineteenth-century building needed to be completely gutted and refurbished and after a half a million pound investment opened its doors last spring reborn as a maritime themed hostelry. The idea was to open a business where the local community, walkers, casual drinkers and diners would feel relaxed and comfortable while enjoying the best quality food and drink.

We visited in the evening so only had a glimpse of the water which is on three sides around the pub. But I know from a previous recce that the Ancholme sluice is to one side and a panoramic over the Humber estuary ahead.

If you are visiting in the evening or at weekends it is certainly advisable to book ahead if you wish to eat. We were seated in the main circular dining room where in daylight you can enjoy that Humber scene. The driftwood bedecked interior, wall divide fish tank and the majestic ship’s figurehead which overlooks the bar pick up the aquatic theme.

So to the menu; there were daily specials on a blackboard and a set menu from which to choose. I wouldn’t call this a gastropub because it has so many qualities of a good old-fashioned local inn, such as excellent beers and cosy corners, and has none of the pretensions. What you will find is some familiar sounding dishes which have been elevated using great ingredients, skilled cooking and inspired presentation.

We began with starters of lobster bisque with sour cream and smoked haddock chowder served with a crispy poached egg. Yes, we did have to sample each other’s choice, they looked too good not to. Lobster bisque is one of my absolute favourites and yet is so rarely offered on a menu. Quite delicious! The smoked haddock chowder was rich and creamy with a crunch of sweetcorn and a perfectly cooked runny yolk wrapped, wool-like, in crisped strands of potato strings.

Other temptations from the seven on offer were chicken liver pâté with rhubarb jelly, sourdough bread and shallot chutney or heritage tomato salad served with truffle and goat’s cheese mousse and pine nuts.

For our main course I opted for the surf and turf from the specials board while my fellow diner had the fillet steak. Colin has imported Italian Maturmeat cabinets, which maintain the perfect humidity and temperature in which to age the racks of beef. My platter held half a lobster and a fillet steak cooked to my taste with a side salad and small bucket of chips. At £34.95 this was the most expensive dish on the menu but if you love steak, you would thoroughly enjoy the quality, tenderness and intense concentration of flavour served.

A TABLE AT THE FIELDS
Produced throughout a full year at Winteringham Fields, A Table at the Fields offers an intimate peek inside the restaurant in the North Lincolnshire countryside which Colin McGurran and his family have made home.

The book includes sixty sumptuous, seasonal recipes created by Colin, and regularly served at Winteringham Fields, as well as a selection from his team of chefs who collaborate to make Winteringham a justifiably world renowned restaurant.

Sticking with the family theme, Colin’s wife Bex also contributes recipes, offering insight into what the great chef – known for his ‘One Mile Menu’ and Great British Menu television success – enjoys eating at home with his family after a busy day in the kitchen.

The cookbook is engineered to reflect a whole year at Winteringham and the creative team returned regularly over twelve months to document the restaurant in all its seasonal splendour.

Each recipe is accompanied by gorgeous photography of the prepared dishes, taken in season to showcase the variety of local produce available to Colin in the county.