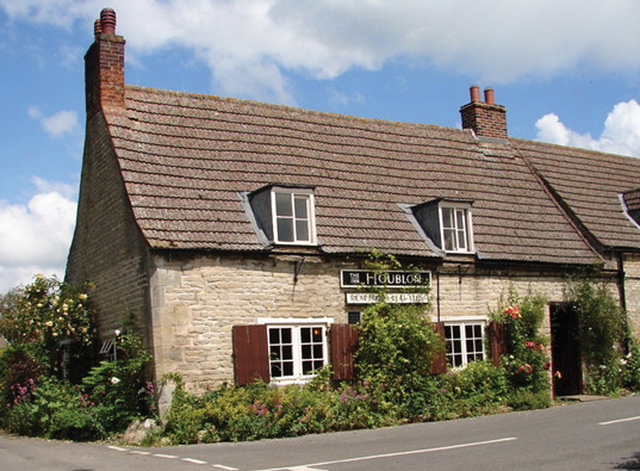 It has been fantastic to visit another Lincolnshire pub that has been reopened after a period of several months closure and it is canny professionals of the hospitality trade who are recognising the prime locations.
John Blenkiron, chef-proprietor, has an impressive CV and already owns the Tally Ho Inn at Aswarby. John has built a strong reputation for excellent pub food and country inn hospitality.

His newest venture, The Houblon Inn at Oasby, had been reopened under John’s ownership for just six weeks when we visited, but it could have been six years judging by the throng of drinkers already in the bar at seven o’clock.

Oasby is a delightful stone built village and the pub is in a prime central location. The building dates from 1650 and can trace its history as an inn nearly that far back. There are real fires, cosy seating, stripped stone walls and beams; a genuine English hostelry, not an interior designer’s recreation.

Originally called the Old Red Lion, the pub then took its name from the local landowner, Sir John Houblon, who was the first governor of the Bank of England. You can find his likeness on the Houblon Inn menu or on the back of a £50 note.

Other diners steadily came in too, to sample what John labels ‘rustic pub dining’ but the menu and choices have a more European influence than that implies.

We began by looking through the tapas and snacks menu. There was a great choice ranging from Devilled White Bait with chunky tartare sauce or potato wedges with sauce ‘Bravas’ to stuffed baby peppers with feta cheese and oregano. John’s newest recruit, chef Nigel, worked in Barcelona for over five years and has expanded this selection and now there are over fifteen to choose from. Mix and match as you like with a jug of Pimms, Sangria or ale and you could easily while away a very convivial afternoon and/or evening!
We went back to looking at the blackboard options, small plates and main course menus that still needed consideration.

I opted for the Houblon tapas board from the small plates menu, while my fellow diner chose the goat’s cheese salad, sunblush tomatoes, Kalamata olives, pinenuts and black pepper croutons. My board was beautifully presented on a slate platter and consisted of Italian hams, tuna and bean salad, mozzarella, Kalamata olives, bread and dips. I enjoyed every mouthful. We could have chosen a soup of the day; new additions to the summer menu include grilled asparagus on toasted ciabatta with wild rocket and shaved parmesan or smoked salmon and cured herrings with cucumber, dill and horseradish cream.

For our main courses, I went for the lamb’s liver and bacon with creamed mash and red wine sauce while my companion went for the Houblon fish and chips with mushy peas, pub ketchup and chunky tartare sauce. Liver and bacon is a classic taste combination and all of the earthy, offal flavour was there, resting on velvety mash. The fish and chips were declared delicious and we both shared a side order of fresh, seasonal vegetables.

John is changing his menus to suit the season, although regular diners will always find firm favourites such as the fish and chips and a good 8oz ribeye steak available. As we move towards summer, John has included lighter fare such as marinated lamb steak with fine green beans and new potatoes, with mint butter or corn fed chicken with a chorizo, roasted garlic and bean stew and green salad.

We had enjoyed some delicious food including the home made breads and we were keen to taste our choice of puddings, which sounded equally tempting. I tucked into a smooth burnt Cambridge cream but I also had a quick sample of the vanilla, orange and blossom honey cheesecake with red berry compote that my companion ordered. Very accomplished puds was our verdict and again the choice varies according to season and availability of produce.

Between courses we had been to look at the garden which has its own boules pitch and barbeque. John explained that there is already a keen group of locals players and even though it was too chilly and dark for us to venture any further, the potential in summer was evident.
So, I raise my glass to John and other proprietors in the county who with dedication, skill and hard work bring trade back to village pubs. The Houblon Inn is once again a centre of community life, employing local people and long may it thrive.