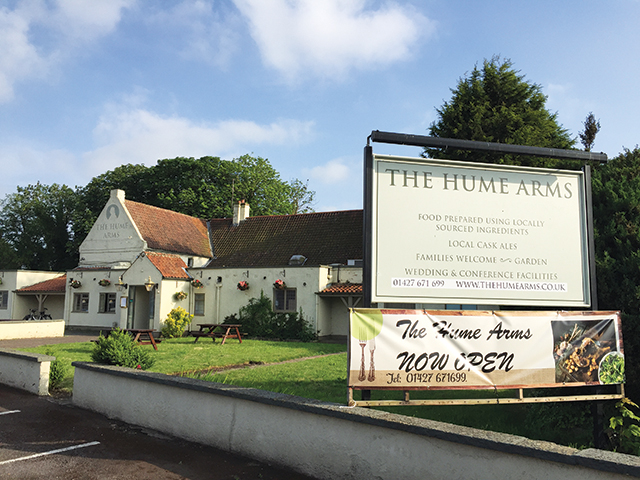 Jane Marsh visits a village pub which reopened under enthusiastic new management earlier this year.
The Hume Arms cannot be missed as you drive through the village of Torksey, standing as it does in a dominant position on Main Street. There is ample car parking and the building is a spacious, making it a suitable venue for a wide variety of events, in addition to being a dining pub.

We visited on a Thursday night and arrived just after 6pm when there were already a number of people in the bar enjoying an early evening drink.

Joel McIntyre is the new owner/chef but it was manageress Kim Fairhurst who first warmly greeted us. Joel did leave the kitchen to chat with us but he and his team have already attracted plenty of local diners and this evening was to prove no exception. Joel previously gained valuable experience as a chef at other well respected gastro pubs in the area before he relaunched The Hume Arms.

Joel’s focus has been to put the business back on the map as a strong village pub, well respected for its good food and close involvement with the community.

We had drinks at the bar, Fentiman’s Rose Lemonade for both of us, and we could have eaten there but we chose to be the first diners to be seated in the restaurant that evening. There was a choice of six appetizers. I chose mushrooms on toast which in this case were pan fried button mushrooms in a creamy Stilton sauce, served on toasted bread with dressed rocket leaves. It was a really well executed and tasty starter. My dining companion chose The Hume prawn salad. The succulent seafood was served on a bed of Romaine lettuce, with a lime and dill mayonnaise with wholegrain bread and butter on the side. The verdict was that this was an ideal fresh and light way to awaken the palate. Other starters available included duck and orange salad, battered Brie, soup of the day or Hume Arms recipe chicken liver pâté.

For our main course there were four vegetarian options, four seafood dishes, a selection of steaks and grills with sauces and sides, and seven Classic pub favourites – surely something to suit all tastes but not an easy decision to make. My friend chose pan fried chicken supreme with sautéed bacon, leeks and mushrooms, finished in a garlic and chive cream sauce, served with fluffy rice. I went for pan fried halibut fillet on a bed of egg noodles with stir fry vegetables marinated in a sweet chilli and lime sauce. The chicken supreme more than made up in flavour what it lacked in colour on the plate. My halibut was meaty and firm with a real heat to the marinade; equally spicy yet comforting.

While we had been eating, the tables around us had been filling up and when we finally left, there was not one unoccupied. This was not before we had chosen a dessert. Joel is certainly serving generous portions so we bided our time before finishing our meal with a chocolate brownie for me and sticky toffee pudding for my fellow diner.

Joel has already established a menu of firm favourites with customers and they have in turn warmly welcomed this friendly and ambitious team to the village. Joel has plans to introduce themed nights and will begin with a Steak Night every Friday but others will feature entertainment, and the function room is in demand for parties and special occasion celebrations. It is good to report that The Hume Arms is again right in the heart of village life.