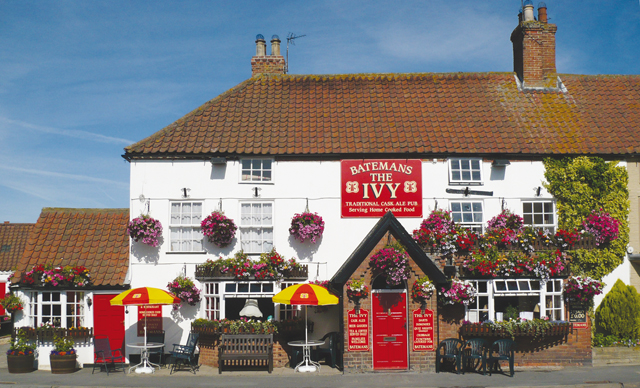 Katrina Burrill visits The Ivy in Wragby
The Ivy in Wragby offers a home away from home in style and setting. Nestled opposite the Market Place, The Ivy commands a prominent position in this lovely village which is only ten miles from Lincoln. Although many people pass through the village either on the way to the coast or to Lincoln, it has many attractions for all the family.

Sarah and Rod Alcock have been the proprietors for three years and in that time they have transformed The Ivy into a bright and spacious bar and restaurant. The bar offers a relaxed setting with a large range of spirits, wines and beers, including locally brewed choices. The restaurant has been cleverly designed to offer areas for families and for diners without children. A child policy for each area offers diners the opportunity to be sat in either the large family area, or within the quieter, adults only, dining area. They have also recently refurbished the outdoor space, and there is now an outside bar with plenty of seating, a decking area and a large children’s play area with plenty to keep the kids happy. For those warm summer evenings this would make a fantastic location to take the kids to.

Rod and Sarah have also employed a friendly team of staff who are happy to help at every opportunity. And even though they are the proprietors they are very hands on, talking to all the customers and getting involved in the day-to-day running of the business.

The menu choices range from pub food, to local specialities and everything in-between. There is a large choice of freshly prepared dishes on the restaurant menu including garlic mushroom bruschetta and homemade soup for starters, and fillet of salmon and Grimsby fish and chips for main course. They also offer a large selection of Lincoln Red steaks sourced from the local village butcher. Aside from the restaurant menu there is also a specials board which complements the restaurant menu. During the day there is a lunchtime menu which includes lighter meals. The Ivy also has a large gluten-free menu with plenty of options for diners.

To start with I had deep fried, breaded whitebait served with tartare sauce. The fish was perfectly cooked with a crisp breadcrumb and succulent fish. My guest opted for seared scallops on black pudding which offered a perfect combination of flavours with texture. The chef had done a fantastic job on the presentation and although it looked too good to eat we tucked in with great anticipation. We were not disappointed. Both of our starters had tingled our tastebuds and we were excited about what would follow.

For our main courses we opted for the homemade steak and ale pie, which was made with Lincoln Red beef and cooked in their own ales. It was topped with a lovely slice of puff pastry and accompanied by hand cut chips, peas and homemade gravy. The beef had been left to marinade in the ale which left it soft and tender and the homemade chips were crisp on the outside with a fluffy centre. I opted for the Stilton stuffed chicken breast which was oven baked with a homemade stilton sauce and served with new potatoes and seasonal vegetables. The chicken melted in your mouth and the sauce had just a hint of Stilton without being overpowering. The seasonal vegetables were also cooked to perfection with a slight crunch. The specials menu offered a wider selection of choices.

Although we were both pleasantly satisfied after our main courses we found it hard to resist the wide choice of desserts. My guest opted for the homemade cheesecake with Cointreau which was light and fluffy and had a delicious biscuit base. After much deliberation I chose the homemade profiteroles with a warm chocolate sauce.

The Ivy is a warm and welcoming restaurant and is well worth a journey to visit. The staff are very friendly and the locals were welcoming and pleasant. We both said that we would visit here again and bring our friends and family, both for a wonderful meal and to sit and relax in the new beer garden.