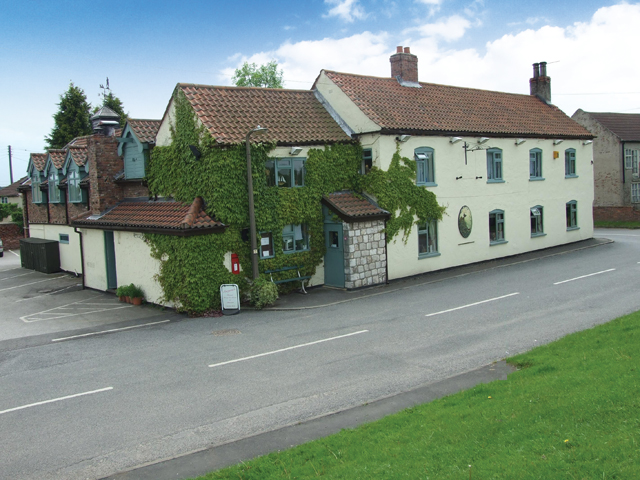 It still holds true that a first impression is a lasting impression and it not just a valuable indication of people but also pubs.
My first impression of The Jenny Wren Inn was of a very relaxed, friendly atmosphere which felt like walking into a room with which you were already quite familiar. Well I did feel right at home with the open fires, which were very welcome on a chilly night and we were shown to a table with very comfortable chairs right alongside.

The Jenny Wren started life as a traditional Lincolnshire farmhouse, so that elongated layout is still identifiable in the main bar. The beams are decorated with brasses while soft furnishings to chairs and seating added to the character and cheerfulness of the room. There are beautiful, ornately carved bars, pillars and fireplace (not original to the house but salvaged from a doomed, local manor house in the 1980s).

We had a drink at our table while we looked through the menu. Other customers that night included couples, family groups with young children and casual drinkers, so there was a good background level of chatter not struggling to compete with some low key background music.

Written on blackboards at either end of the room were the daily specials, which we considered with the choices on the set menu. Produce supplied by local butchers was credited, which is always a good sign, and I was especially pleased to see such a good choice of fish dishes on the specials board.

I opted for eggs Florentine in a tomato sauce while my companion ordered a salad of oven roasted vegetables with Parma ham wrapped mozzarella. Mine was a thoroughly satisfying mix of softness, flavour and warmth while the attractively presented salad would have been even better with slightly more dressing.

The choice of main courses made for a more difficult decision. There were pub classics such as steaks but also more tempting fish, pasta and other international dishes. My friend chose the homemade steak and ale pie served with a choice of chips, new or mashed potatoes. I continued my quest for comfort food and ordered fillet of smoked haddock in a cream and leek sauce served with mashed potatoes. A steaming dish of fresh seasonal vegetables was placed between us to accompany both dishes. The pie was declared ‘melt in the mouth’ with beautifully cooked chips. My dish absolutely hit the spot for succulent, meaty fish with just a tang from the leek sauce. Both were generous portions which we hunkered down to finish.

I needed to have a break before considering a dessert, so I wandered through to the locals’ bar. There is an unmissable feature above the hearth which I hadn’t seen before. The plaster pig’s head on a plaque had a very scarred and white nose on top of which was a two pence coin. This indicates a pub game using a skittle suspended from the ceiling, which is swung to dislodge the coin. Team members get decreasing numbers of attempts apparently, which must get hilarious after a few pints. I’ve made a mental note to go back and have a go at what looks like a very Lincolnshire inspired game.

I’m afraid I could only manage a scoop of ice cream for my dessert but my fellow diner had room to sample the syrup sponge with custard, which really was a showstopping end to her meal.

Before we left we were shown the function room which is upstairs from the main bar. A refurbishment has just been completed with contemporary feature wallpaper, new lighting and furniture. The room is perfect for celebrating a special occasion with up to sixty guests and hosts wedding receptions, anniversaries and birthday parties.

While we did not wander beyond the car park on the night we visited, the Jenny Wren is located alongside the River Trent at a point at which it is so close to its flow into the Humber that the river is tidal. Customers in summer use the seating area with tables on the bank.

Take a trip to discover the charms of the Jenny Wren and its delicious food. While you are in the area explore more of the Isle of Axholme, a part of the county rich in folklore and history.