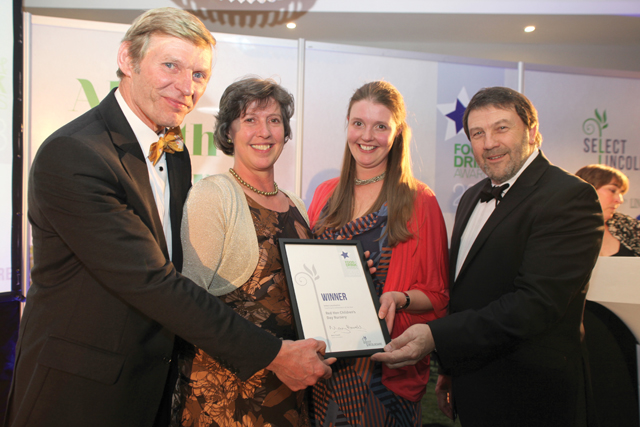 The Lincolnshire Food and Drink Awards 2013

PEOPLE’S CHOICE
Amy Morley of Lincolnshire Cooperative presented this award. Over 1,200 members of the public voted online – via Twitter, Facebook and the Select Lincolnshire website. In a closely fought contest, the final result was a tie between:
Winners:
Redhill Farm Free Range Pork
and Mountain’s Boston Sausage

FURTHER ACCOLADE FOR REDHILL FARM
It has been an exhilarating time for Jane and Terry Tomlinson, founders and directors of Redhill Farm Free Range Pork. As well as being voted joint winners of The Lincolnshire Cooperative People’s Choice Award they have also been selected by Jamie Oliver to supply their award winning Free Range Pork Pies for his British Tapas menu at his new Union Jacks bar at Gatwick Airport. Jamie’s team visited the Freedom Food Accredited farm, which is located near Gainsborough, last year and went away delighted with what they saw and how their company ethos fits with the Jamie Oliver ethos.
The success of Redhill Farm is based on simple artisan principles where everything from the ethical animal husbandry to every stage of the production process results in pork of proven quality with genuine provenance on the small, family owned farm.