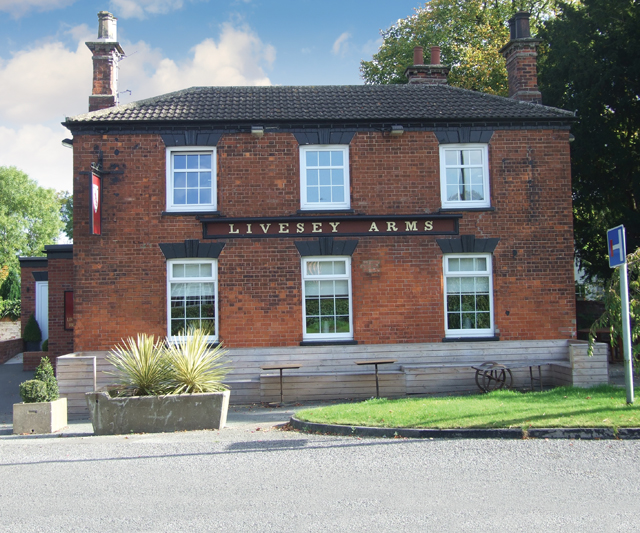 I suppose we bandy the word heritage around too liberally these days but I make no apologies in the case of The Livesey Arms, which dates from the late eighteenth century and takes its name from the local Lords of the manor.
Ludbrough is a charming Wolds hamlet, six miles north of Louth, just off the A16. Before the bypass, traffic between Louth and Grimsby passed through the village but today turn off and head in the direction of the church to find The Livesey Arms almost opposite.

The pub’s heritage of hospitality had endured through the centuries but local businessman, Paul Mager, stepped in a couple of years ago and bought the pub when its closure looked imminent. A complete refurbishment was undertaken and well-known county chef Rosie Dicker helped to design the interior and guide installation of a new state-of-the-art kitchen. The interior was opened up to provide a lounge and two dining areas flowing around the centrally located bar. Modern, stylish and chic, the interior features wooden floors, bursts of vibrantly coloured soft furnishing fabrics and discreet but witty choices of designer wallpapers.

Rosie also decided to take up the chance to run the kitchen herself and what chef would not give his or her right arm to work in the superb layout she helped create?

Rosie’s career in hospitality began in the late 1970s and readers may know her from previous establishments in Market Rasen and Louth, her private dining clubs and catering business. Her philosophy is simple, “to source the best ingredients cooked simply to create modern British food.”

We visited on a Friday evening and decided to head straight to our table rather than loiter in the lounge. Other diners, though, did relax in the comfortable seating while they looked through the menu and customers just coming for an evening drink came and went as we enjoyed our meal.

Yes, this a country pub but with a menu well balanced with classic favourites and fine dining dishes.

We began with delicious seeded spelt bread, served warm with Lincolnshire Poacher butter. I chose a salad of smoked Goosnargh duck breast with fig, apple and hazelnuts for my starter while my dining companion chose crab custard with pickled fennel and watercress. To be honest I could have chosen any of the five starters on offer. They were all equally tempting. We shall have to make a return visit to try the roast tomato and garlic soup with basil pesto, creamed Yellison goat’s cheese with heirloom tomatoes and basil vinaigrette or the Enderbys’ smokey smoked salmon with avocado and pink grapefruit. My salad had a light refreshing dressing which really brightened the palate. The figs were perfectly ripe and complemented the smokiness of the duck. A final addition of texture and flavour was provided by the hazelnuts. The crab custard was a definite hit with my companion. I could tell from the murmurs of approval as she savoured each mouthful of the light mousse, served with a slice of chargrilled baguette.

Rosie had given me a quick tour of her kitchen when we first arrived. Inside her generously sized cold room was aged Lincolnshire beef, bought on the bone direct from the abattoir. Rosie is sourcing as much of her produce as locally as possible and prefers to further dry age her beef and butcher it herself to ensure the quality she is looking for. Pride of place in the chefs’ working area is a Josper charcoal fired grill perfect for cooking the steaks for which The Livesey Arms has already made a name.

My companion opted for the beef bavette steak with real chips, watercress and chimichurri sauce while I chose Cornish monkfish with baked tomatoes, olives, capers and shallot vinaigrette. A side dish of fresh, seasonal vegetables was also served. The beef was meltingly delicious with its generously sized handcut chips. My monkfish was meaty yet milky; perfectly cooked. Its bed of samphire, baked tomatoes and vinaigrette gave a sweet and sour hint, which was perfectly balanced with the flavour of the fish. I also enjoyed a glass of house Sauvignon Blanc with this course.

Also on the menu was cider battered fish and chips with crushed peas; slow roast shoulder and rack of lamb with white onion sauce or twice baked goat’s cheese soufflé with kale and mushrooms.

For dessert there were choices of vanilla cheesecake with blackberries and mint; salted caramel chocolate mousse; damson parfait and meringue; Affogato (vanilla ice cream and espresso) or a selection of Livesey Arms ice cream. We did manage to conclude our meal with the damson parfait and the chocolate mousse, with a coffee to finish. Both were absolutely a perfect end to an exceptional meal. I am sure the selection of British cheeses would have been top drawer too but our appetites were already satisfied.

I also had a look through the bar menu and options for Sunday lunch which again show the intelligent choices of an experienced hospitality professional. How wonderful that this long established hostelry has been brought bang up to date not only with its interior but also with an exceptional food offer.