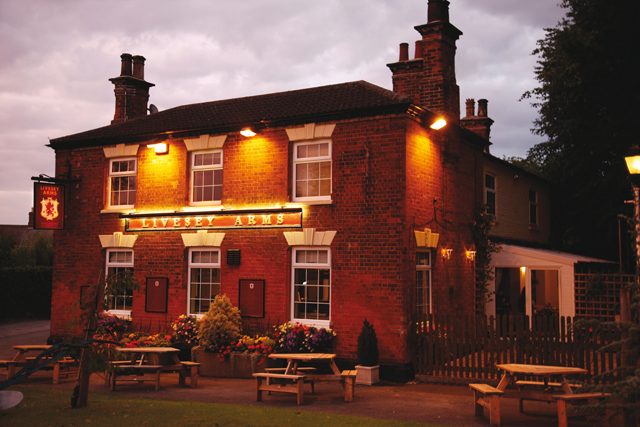 Jason Hippisley went to dine at a pub that has always held a special significance for him.
The Livesey Arms at Ludborough has always been something of a legend in my life; a building passed at least twice a week during childhood and always a familiar landmark signalling the approach to home.

This, coupled with its status of ‘chapel’ as a euphemistic excuse for going to the pub by a gentleman acquaintance, has always given the Livesey a certain allure.

And so it was with some eager anticipation that my fiancée and I turned out on a chilly November night to sample the offering which new licensees, Ben Ingoldby and Helen Mahon, have brought to this familiar staging post.

Ludborough is a delightful little village now bypassed by the A16 running between Louth and Grimsby. The reduced traffic ironically serves the pub well by enhancing the setting and the outdoor seating at the front.

And if one of Ben’s many ambitions for the Livesey comes to pass in the spring, the alfresco aspects will be just as welcoming as the inside, since he aims to set up a kitchen garden within the attached two acres of paddock.

This will not only ensure optimum freshness, seasonality and provenance of what goes from plot to plate, but allow diners to truly savour the flavour by getting to the very origins of the ingredients.

Just four months in, and Ben is brimming with such fine ideas and ambitions, detailing menu intentions which will certainly draw punters time and time again as he and his kitchen staff settle into the swing of things.

Building on the latest innovation – a pork pie made with chorizo and served with turmeric raita – the Christmas menus promise to be spiced up with a few welcome twists.

So soon into his new career Ben, in association with enthusiastic head chef, Sam Wilson, has pieced together an excellent selection of dishes which far exceed the standard epithet of ‘good pub grub’ and show promise of aspiring to ‘fine dining’.

Both Annabelle and I leapt on the specials selection without even leafing through the other options and found much to satisfy our self-induced hunger.

My mixed grill was a carnivore’s feast, succulent steak, gammon, sausage and black pudding jostling with a massive mushroom, grilled tomato, fried egg and the finest onion rings. Oh and the chips! The chips were something else – the product of laborious research with a village wholesaler for optimum sugar and starch to make the perfect chip.

The onion rings were treated with the same light and delectable beer tempura applied to my black pudding starter which was a similarly inspired offering, served with horseradish.

Annabelle enthused over her pan-fried goats cheese starter which was a most flavoursome appetiser for the trio of speciality sausages arranged in a bowl of what she described as ‘the most delicious’ mashed potato, peas and gravy. A classic is a classic for a reason and this, she said, was certainly a classic.

In discussion with Ben it transpires that the sausages come from one of Louth’s many excellent butchers and they were certainly well crafted and meaty. Although he doesn’t shout about it, much of what he serves is locally sourced and I suggest it would be to Ben’s advantage if he were to champion this strength further.

After a welcome break, warming by the open fire in the spacious and subtly-decorated restaurant, we chose deserts of a crème brulee and steamed lemon sponge.

And so, back to the bustling bar which remains popular with locals.

People say the beer is the best it’s been for a decade.

I defy Ben not to transfer culinary influences from his six years in Lagos to Ludborough as that would produce something really quite special, well worth travelling for.

Already, under Ben and Helen’s care, the Livesey Arms tops the list of 20 restaurants in the Louth area on the independent review site Trip Advisor. From the comments there, it’s clear that the fish and chips and vegetarian options are highly recommended, so that’s another good reason to return sooner rather than later.