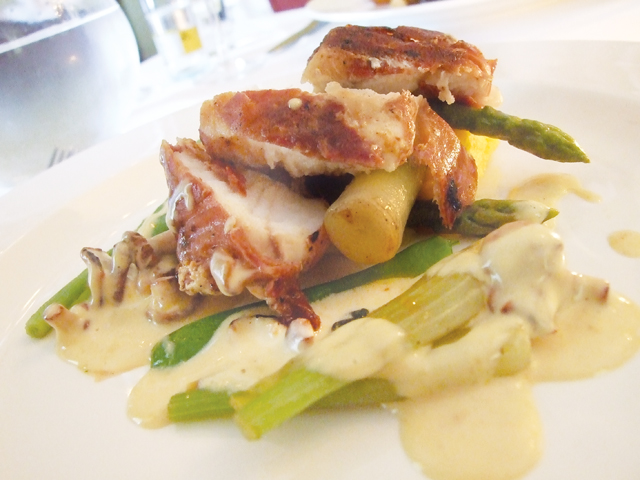 It doesn’t matter how well you know Lincoln, there are always hidden delights waiting to be discovered.
Located right in the heart of the historic uphill quarter of the city, to the side of the Cathedral itself, the entrance to The Old Palace is found via an archway which leads down to a series of medieval, Georgian and Victorian buildings which are former homes of the Bishops of Lincoln. I took a friend along who struggled to locate exactly where this hotel and its newly opened fine dining restaurant was.

Although it is somewhat hidden from the bustle of the city, there is parking available in front of The Old Palace and it has already built a firm following as a boutique hotel. I have been to many conference and business meetings there in the past and have admired the views across the city from the gardens, with the Cathedral vineyard tucked away from general view on the terrace below.

It was one of the balmy, very warm evenings in August when we visited and, as per our Dining Out visit the previous month to The Vine Hotel, a wedding reception was in full swing. How lucky they were to be in such marvellous surroundings to enjoy their celebrations on such an ideal evening.

The restaurant has been launched on the back of a series of pop-up restaurant events that have been held since the beginning of the year. We were shown to the Flinders Room at the top of the Georgian staircase which offers more intimate surroundings for up to fourteen diners. There is lots of flexibility, with the adjoining King Room also accessible for larger parties.

The rooms have elegant wooden panelling and plenty of original feature fireplaces, plasterwork and tall windows with views across the city – as would have befitted a home built for a Bishop in that era.

We were seated straight away at our table to look through the choice of five starters, six main courses and five desserts on the menu that evening. Intelligently put together, the menu is not overly extensive but includes courses to satisfy every taste. We thoroughly enjoyed a selection of breads and flavoured butters with an amuse-bouche of crab and celeriac while we made our choices. For starters, we could have opted for tomato and basil soup; smoked duck breast and duck leg rillettes served with a radish salad and beetroot puree; or dressed heirloom tomatoes and purple potato salad served with homemade basil cheese balls. After some consideration, I chose the Lincolnshire asparagus with a soft poached organic hen’s egg, tonka bean and Hollandaise sauce while my companion tucked into pan seared scallops served with cauliflower and summer black truffle puree topped with a smoked pancetta crisp.

Our starters were delicious! The Hollandaise sauce was freshly prepared – a challenge that many restaurants would not even contemplate – and the kitchen made an excellent job of this classic combination. The scallops were plump, juicy and beautifully cooked which was again declared to be a thoroughly well executed version of this dish.

Our main courses were very generously portioned. I had the monkfish wrapped in Parma ham served with stir-fry baby seasonal vegetables while red wine braised blade of beef, served with yellow oyster mushrooms and confit potato, was enjoyed across the table from me. The other options were grilled lamb rack and shoulder confit with rosti potato, baby carrots and thyme scented red wine jus; pork tenderloin wrapped in sage and Serrano ham with black pudding, and pork belly with shallot and prune sauce; a seasonal summer vegetable tarte Tatin with local goat’s cheese mousse and griddled vegetables; or a chicken breast stuffed with mushroom, tarragon and pistachio served with a truffle velouté. Our dishes showed the talent of a very accomplished chef who is focusing on delivering beautifully cooked and presented food.

We both opted for chocolate themed desserts with a spiced roasted peach, served with chocolate delice and vanilla pod ice cream, for me and chilli chocolate tart, red berry sorbet and Morello cherries for my fellow diner. We could also have had lemon and lime panna cotta with almond praline and berries; vanilla crème brûlée and lavender shortbread; or a selection of Lincolnshire cheeses with homemade chutney and plum bread. To finish, we had coffee served at our table.

The Old Palace has the ambience of a much longer established hotel and restaurant and could be a dining club, certainly a grown-up choice for dinner or a private dining party. You can be sure that the cuisine will impress as equally as the surroundings at this Lincoln hidden gem.